Amsterdam Arena is a beacon of smart city initiatives, in a city that is, itself, far more advanced than most (for the wider Amsterdam picture, read here). The concept has been to use the stadium as a “living lab” for initiatives ahead of roll-out to the wider Amsterdam metropolitan area. Not only has a considerable amount been delivered to date but there are ambitious plans to accelerate the activity.

When completed in 1996, the stadium (now officially the Johan Cruyff Arena) was in a fairly run-down area but lots of businesses have followed, which brings synergies and opportunities.

The six smart city themes are fan experience (attendances can reach 60-70,000 for concerts, 55,000 for football matches, in an area with only around 100,000 residents); customer journey (mobility); safety and security; sustainability and circular economy; facility management; and digital connectivity.

Its energy achievements and plans are particularly impressive. There are 4,200 solar panels on the roof of the Arena and the energy can be stored and used optimally using the three megawatt capacity of second-life and new electric vehicle batteries (the equivalent of 148 Nissan LEAF batteries, the largest in Europe in a commercial building). 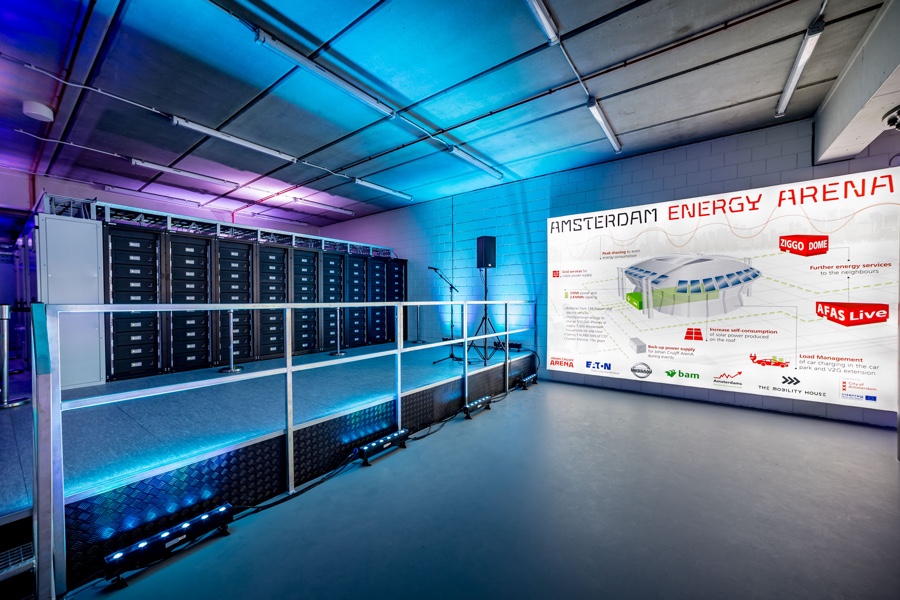 The capacity can support one match or one concert and, at other times, provides energy to the Arena’s neighbours and the Dutch grid. As with all of the Arena’s initiatives, there are a number of partners involved, including Nissan and Eaton (providing the power conversion units).

Firstly, the aim is to provide more energy within the wider neighbourhood on a micro-grid basis. In its sights are a nearby hospital, which currently relies on back-up diesel generators, and Schiphol airport beyond this. It also envisages smart electric vehicle charging, with load management so that customers can not only charge their vehicles but also provide electricity to the micro-grid. Ways to potentially compensate them include free parking and reduced or free tickets, said Pasman. Residents will also be able to participate. 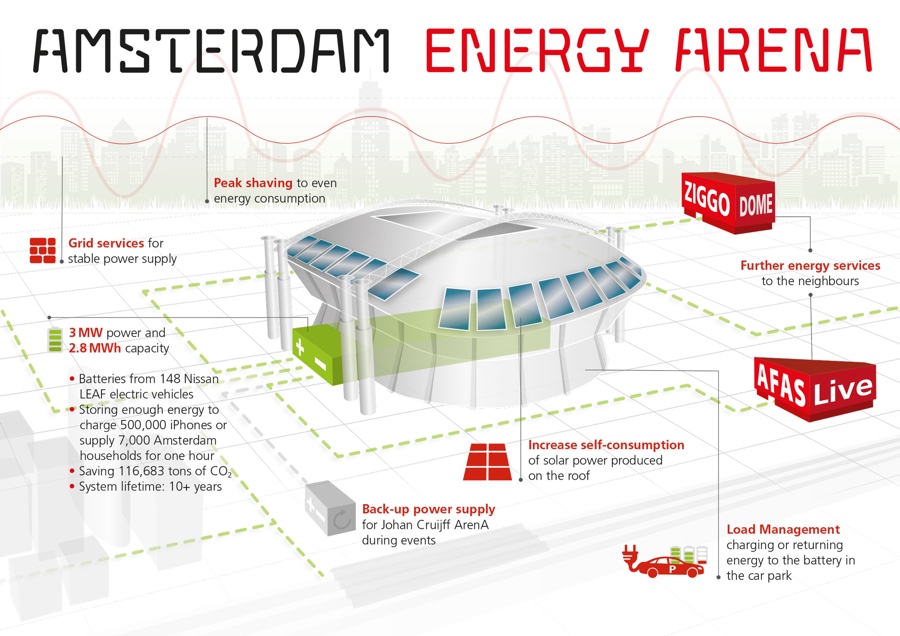 A partner for this next phase is Nuon, which has already worked with the Arena on renewables, providing the solar panels and top-up Dutch wind energy (wind certificates guarantee that the wind energy is generated in the Netherlands), while heat is supplied by Nuon’s waste-to-energy plant in Diemen. Also planned, for next year, is roll-out of 5G.

For planning and operations, the Arena is building a “digital twin”, which will allow it to do modelling. Using geo-spatial mapping, the twin is already being used to support the Arena’s mobility operations centre, to plan for concerts, matches and disruptions such as security breaches. For new projects, the digital twin will allow for scenario testing, such as modelling the implications of adding a new building to the area.