Another nail in the coffin for public buses?

So if buses are not the answer, is on-demand public transport the way forward? The launch of its own buses by travel app company, Citymapper, generated a lot of interest – https://smartercommunities.media/citymapper/ – but these have now been dropped. This is despite all the slick marketing, onboard innovation and app-derived big data to underpin the business case.

It would be understandable if the existing bus operators afforded themselves a wry corporate smile while muttering ‘told you so’.

But the upstart isn’t done. Citymapper has launched the Smart Ride Responsive Network. This is an on-demand service, initially in North London. Its eight-seater vehicles (which means it needs a taxi licence, not a bus licence) run on a specific network and move in multiple combinations based on the demand. It uses pick-up stops to coordinate multiple passengers.

Citymapper president, Omid Ashtari, cited the inflexibility and inefficiency of fixed routes and the restrictions of regulations. One of the problems was the months it took to gain approval for its initial night bus service and then further long delays when it wanted to change how it ran the route, once it started to gain experience.

Here is the crux of the issue: If you carry nine or more people in London, you’re a bus and have to follow strict regulations on fixed routes, schedules, and service frequency. Carry eight people or fewer, and you’re a private hire vehicle that can go wherever you want, however you want, how often you want. As a result, a private hire vehicle can respond to demand, a bus cannot.

Longer-term, Citymapper hopes the eight passenger distinction will be done away with, as it would prefer to run its small buses on the Smart Ride network, rather than its new minivans.

Citymapper is still claiming a much better basis for launching services than its bus and taxi competitors because of the all of the data about people’s movements in London gleaned from the app. “We know where the gaps are, so we should be relevant to you,” says Ashtari. Uber, for instance, only understands one mode of transport, he adds. 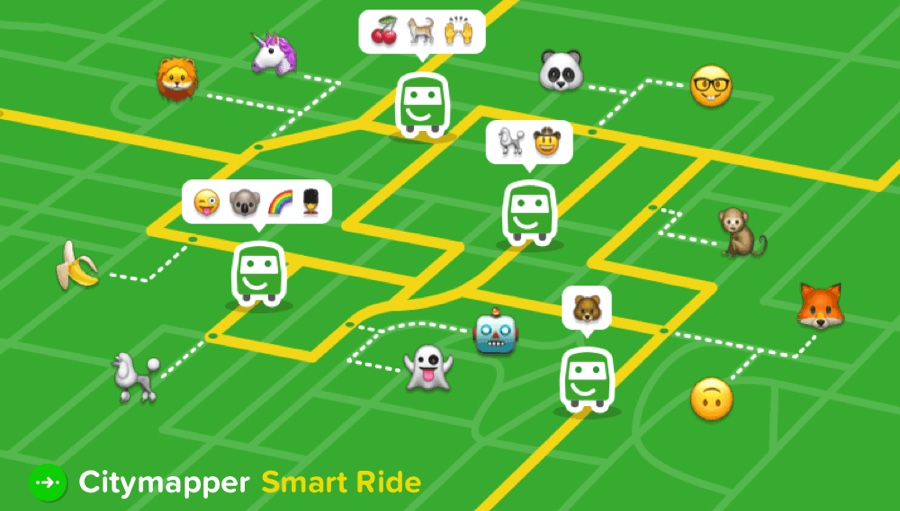 Smart Ride has started from 7am to 11pm weekdays, 7am to 2pm on Saturdays. It stretches from Paddington in west London to Whitechapel in the east and Stoke Newington in the north. It is priced between a bus and taxi fare, bookable with a credit card and account, via the app.

The marketing of Smart Ride remains jaunty and upbeat; Ashtari still claims that Citymapper is “waging war on the scourge of the single occupancy vehicle”. His company now describes buses as “the least liked mode of transport in every single city where we operate across Europe, the US, Asia and Latin America” which is pretty different to what it was saying when it launched its own buses not long ago.

Citymapper still uses the word ‘revolution’ when describing its latest venture but, for many, its rapid ditching of buses will be disappointing, while others will see it as an indication that this mode of transport’s decline in passenger numbers is only set to continue.
By Martin Whybrow|2018-09-21T10:24:08+01:00Sep 21st, 2018|Transport|1 Comment