Baltimore has been in the spotlight in the last week or so due to Donald Trump’s denigrating of the city. In a broadside at another African American lawmaker, Trump tweeted that his Baltimore district is a “disgusting, rat and rodent infested mess”.

Of course the Maryland city has its problems. Baltimore ranks in the top ten of the least livable cities in America. Built as a city for one million, its population is currently around 610,000. Of the 275+ neighbourhoods, 24% are in poverty. There are many vacant properties and lots; it has had riots and suffered government corruption in the past.

From Food Waste to Healthy Eating

“We’ve been really forced to rethink as a city,” said Anne Draddy, Baltimore’s Sustainability Coordinator, at the recent ICLEI Resilient Cities conference. One aspect has been food, which is interlinked to so many other issues. In the city, 150,000 people are deemed “food insecure”, so around 23% of the population (the national US average is a still shocking 12.9%). The gap in Baltimore is estimated at 24 million meals per year.

And yet Baltimore city throws away nearly 100,000 tons of food waste annually. A food waste and recovery strategy was started a couple of years ago. At the outset, 14 residents – one from each council district – came together to help develop the policy. This in itself represented a new way of working for the city. Draddy cited as common barriers: Lack of access to basic data; lack of capacity; and not knowing where to start.

It was recognised that a lot of people were consuming a lot of calories but were still under-nournished. One in three children were in “food deserts”, the definition of which includes being more than one mile from a grocery store.

One focus is on “healthy food priority areas”. This includes encouraging urban farms and community gardens as well as reducing food waste and improving healthy eating options in schools. The commercial sector is involved, with training and education to reduce food waste alongside forging links to organisations that can distribute any that is left over. 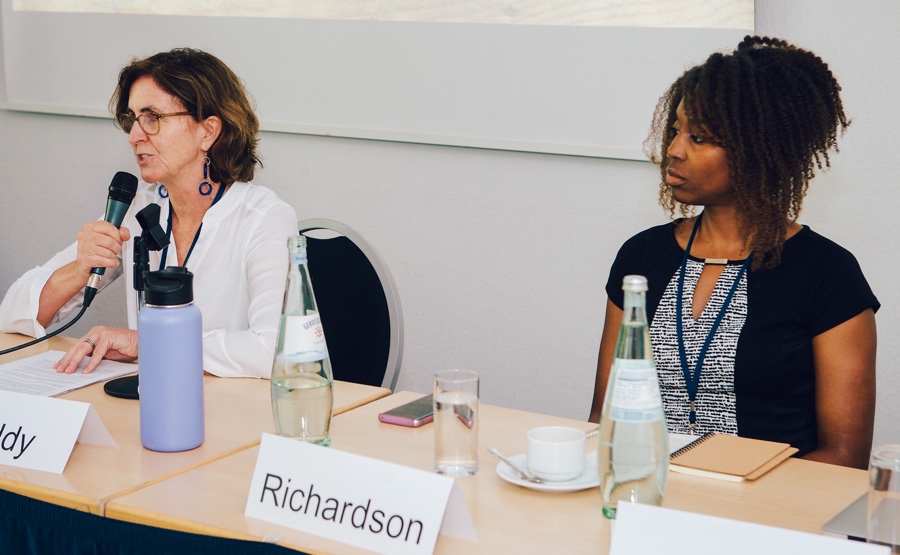 Baltimore’s Anne Draddy and Ava Richardson at the ICLEI event

In total, there are 23 topic areas and 275 action items, mapped on a website. These span:

Prevent and reduce – campaigns are one of the best things you can do, says Draddy;

Recycle food scraps – including addressing the fact that the nearest compost facility is an hour’s drive from Baltimore.

Ava Richardson, Baltimore’s Food Matters Technical Advisor, emphasises the community aspect to this. There was already a strong community effort on food rescue across the city, with “a lot of people doing great work” but the challenge was to support this, connect people and identify the gaps.

Messages are developed that reflect the strong identity of each neighbourhood. There is a lot of synergy with other priorities in the city, such as reducing packaging, improving air quality, cutting greenhouse gas emissions, increased recycling and better water quality.

There is an existing incinerator plant that was built in the 1980s and constitutes the largest polluter in the city, says Richardson. Baltimore has passed a Clean Air Act and she expects the plant to close in 2020 or 2021, something that a lot of residents have pushed for. At the same time, the existing landfill site has only another seven years capacity and, although a new site has been purchased, there is a big effort to improve recycling rates. This includes looking at best practice in the US and beyond – the city has recently studied technology used in Milan to support charging linked to bin-tipping volumes.

There are similar food waste initiatives over in Denver, Colorado (where, among other things, the term “food desert” has been replaced with “low food access areas” as residents felt the former term was stigmatising their neighbourhoods). Here, the population is increasing steeply (100,000 added in the last decade to take the total to 700,000). An initial analysis was done of the food sector and people’s perceptions of waste. Of Colorado’s food system, 18% is in Denver and it supports almost 55,000 jobs. Around 21% of food is composted, with a target of 34% by 2020. There is only one, privately-run compost site, so there is a resiliency risk, plus low market demand for the finished compost and high rates of contamination.

In Denver, as in Baltimore, there are many small, volunteer-run organisations with small budgets involved in rescuing food but they are typically not connected and there is a clear need, says Food System Administrator, Laine Cidlowski, for more refrigerated storage capacity. There are 40+ goals within the city’s food strategy, so lots of competing priorities, but among the projects are pilot schemes in nine restaurants to prevent waste, with the city looking to add a food waste requirement to its green business certification programme.

Those residents who use a car more than once a week to shop for food tend to generate the most food waste. Half of residents felt less guilty about wasting food if it is composted. Trash bin digs for more than 50 representative households found that, of the average 6.5 pounds of food waste per household per week, two-thirds was edible. Fruit and vegetables made up around 29%.

Resident engagement includes flyers, engagement with community groups, partnerships with grocery stores, and online resources (including an online game to aid knowledge about what can be recycled). As with Baltimore, the city is evaluating volume-based charging for rubbish collections. The food rescue community has been engaged, including the donors and foodbank recipients, to see how to unblock current issues. And there is a programme to educate businesses, including clarification about food donation guidelines. And Denver wants to ensure longevity, so is trying to create long-term fuding to ensure the projects survive the end of the current funding.

For both Denver and Baltimore, that funding comes from the  Rockefeller Foundation’s Food Matters programme, supported by the Natural Resources Defense Council (NRDC). The funding has allowed the cities to hire full-time Food Matters staff dedicated to improving their respective urban food systems. The NRDC focuses on four areas: rethinking the nature of the problem, preventing food waste, rescuing surplus food for the community, and recycling food scraps.

The NRDC puts the challenge into a national perspective. It estimates 40% of the US’s food is wasted, with consumers the worst offenders. Its savethefood.com website offers lots of tips as well as emphasising the financial savings, with the message that an average four-person family can lose at least $1500 per year on food.

Of course, the food waste efforts are not going to transform Baltimore alone but the overall sustainability work is important in aiding the transformation. The Office of Sustainability’s stated aim is to build a sustainable and resilient Baltimore by integrating “the principles of environmental integrity, social equity, and economic prosperity into plans, practices, policies, and partnerships. Our goal is to provide innovative solutions to our City’s challenges while engaging, educating, and motivating all sectors of Baltimore.”

As is so often the case in the US, while the president might gain the headlines, scratch below the surface of individual cities and states and there are often reasons to be hopeful.