A small army was at work cleaning after the previous evening’s match at Stamford Bridge. How many hours of cleaning would be needed to pay for one of those seats for a Chelsea game? The low-key Smart Cities event in the adjoining Copthorne Hotel, with its boxes looking out over the pitch, leant itself to such ponderings.

How much of this Smart Cities stuff touches on people’s most pressing daily challenges? As the Greater London Authority’s Nathan Pierce observed: “Despite technology, the alarming statistics are getting no better, in many cases they are getting worse.”

One speaker was from University of Cambridge and was involved with the Smart Cambridge initiative. Smart Cambridge says it is “working together with a wide range of technology businesses to provide a ‘digital’ platform to support the transport infrastructure investments taking place in our region”. Which is absolutely fine but for the second year in a row Cambridge has just been identified as the least equal city in the UK by the Centre for Cities.

As the event meandered, so the cleaners worked their way around the stadium. This is not to disparage the efforts of the 26 male and four female presenters (these events could certainly get their own houses in order) but it seemed even more of a bubble than usual. Maybe the air of despondency for the majority of last night’s crowd (Chelsea lost 3.0 to Bournemouth) still hung over the venue.

A conversation the previous week with the Chief Resilience Officer (CRO) of one UK city still resonated. Her position was financed for two years as part of the Rockefeller Foundation’s 100 Resilient Cities programme and then the funding was cobbled together for another year but, beyond the end of this financial year (the end of March), she has no idea if she will still have a job. If even CROs and their resilience plans aren’t resilient, what hope anyone else?

The challenge of innovating against a backdrop of relentless cuts to local authority budgets was inadvertently spelled out at the start of the event. The morning’s chairman highlighted a nice looking project in Bristol where local residents had negotiated to close their road for two hours each week to turn it into a children’s playground. Coincidentally, next up was Bristol North-West MP, Darren Jones, who admitted the scheme had now ended because of council budget cuts. If even the completely non-tech, low-cost projects can’t survive, what chance anything else?

In the intervals, a clutch of exhibitors sought to entice the delegates with their solutions. Broadway Malyan boasted: “We are leaders in Transit Orientated Developments and Mixed-use Community Placemaking”. A comment by Daniel O’Connor, CEO at office reuse specialist, Warp It, sprang to mind: “If you say to people on the street, ‘blockchain’, it will melt their minds.” 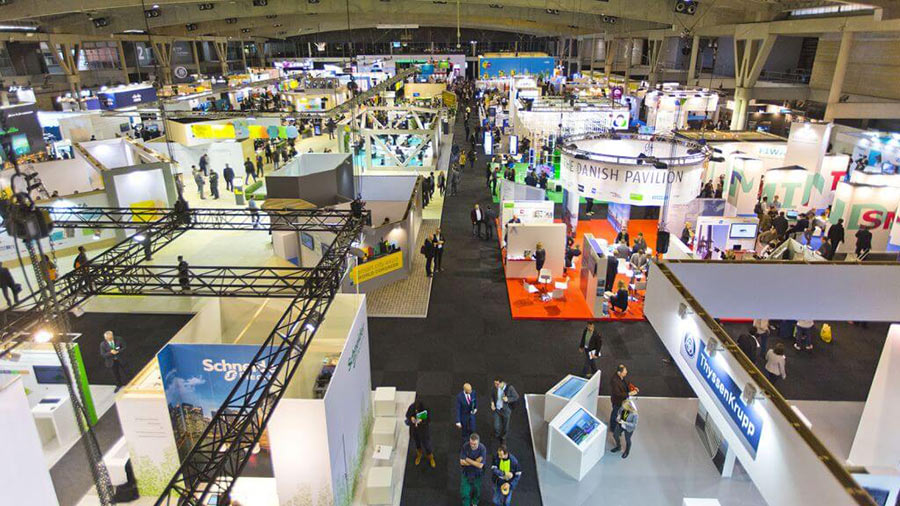 So many ‘smart cities’ solutions but how many have a broad impact?

So what’s the answer?

There are many fabulous projects around the globe that have a positive impact on people’s lives. Warp It itself is great, with 1000+ schools, 1000+ charities, over half the UK’s universities, plus councils, the NHS and private sector using its service, with demonstrable savings that can then be spent on other things, plus all of the environmental benefits of reuse.

But so much seems piecemeal, sometimes having a tangible impact but only for a few people and often only for a limited period of time. We need Smart Cities with a rocket under it.

For the biggest and longest-lasting changes, leadership and power are prerequisites. Central governments have the latter to a degree but usually lack the former, not least because of the lobbying and financial clout of those with a vested interest in the status quo. With one piece of legislation, governments can shift the goalposts but too seldom do so.

Individual cities and regions, where they wield power, can be major forces for change and it is no coincidence that some of the most hopeful signs are here. These include the US cities that are fervently pursing their climate change and social improvement goals irrespective of their country’s president; the likes of Amsterdam (which shows how many small projects can equate to much larger change if given enough resources, energy and stability – https://smartercommunities.media/society/truly-smart-city-five-lessons-amsterdam/); and increasingly some UK cites with elected mayors.

The regeneration of Bogota through open spaces and public transport is an obvious example of what can be achieved with sufficient empowerment and will. Or the Treviso region in northern Italy, which has been able to achieve what any other community could do if it wanted to: 85 per cent recycling rates (click here: https://smartercommunities.media/environment/recycling-italian-style-trevisos-success-story/).

But this needs to permeate to all cities, towns and other communities that remain immune from progress. The EU-led Smart Cities Lighthouse/Horizon 2020 model, where leaders are grouped with followers to create a structure for sharing and replicating projects, looks a good one. It has 86 cities as participants at present and runs from 2014 to 2020. Of course, crucially it also has investment of €77 billion.

Could this type of leader/follower model be adopted on a national basis as well? Change is needed in Mansfield as much as it is in Manchester. The latter’s CityVerve spans Greater Manchester, which includes other towns and a second city (Salford) so there is a local ripple effect here. But too much of the map of any country is missing any sort of transformation effort.

There is strength in numbers. As the GLA’s Nathan Pierce commented: “Investors see cities as too small”, even those of the size of London, so cities often have to rely on grants or wait until technology is proven and the price comes down. “How can we break the mould?”

What’s needed is breaking the mould at pace, bringing change to cleaners as well as commuters, and taking in the forgotten communities as well as the high-flying cities.