Can cities’ resilience plans be resilient themselves?

Until October of last year Lina Liakou was Chief Resilience Officer for the Greek city of Thessaloniki. She then joined the ambitious Rockefeller Foundation-backed 100 Resilience Cities initiative. We spoke to her about what resilience means for the Greek port and about the wider work of 100RCs.

How can cities’ resilience plans be resilient themselves? As the 100 Resilience Cities (100RCs) programme moves forward, so this question comes to the fore.

Those cities that were selected have either produced or are on the way to producing eloquent and comprehensive resilient plans. But as with any such documents, the theory has to be matched by reality. As 100RCs moves towards the delivery stage, so the heavy lifting begins and so the success or otherwise of this hugely ambitious scheme will be determined.

A backdrop of long-term austerity brings an additional level of complexity. If the public funding is not available, is the strategy worth the paper it is written on? The 100RCs participants themselves receive two years’ funding to create the Chief Resilience Officer (CRO) position and other help, but what happens when this comes to an end?

Lina Liakou is one of those tasked with managing the implementation phase and building a robust financial proposition to support this.

She is in a good position to understand the challenges. She was deputy mayor for urban resilience and development planning in Thessaloniki, Greece’s second largest city, from March 2016 to October 2017 where she was responsible for development and implementation of the city’s resilience strategy, “Thessaloniki 2030”. She is now regional director for Europe and the Middle East at 100RCs, so has a broader perspective of the challenges and next steps. 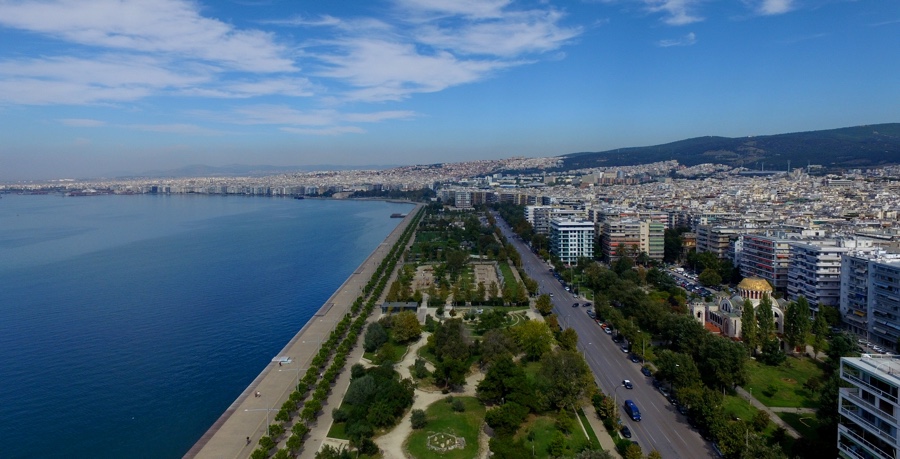 Thessaloniki – the Challenges and Opportunities

The city was selected as one of the second tranche of 100RCs applicants in 2015. Work on the port’s resilience strategy started at the end of that year and it was published in March 2017. “It was the first time that it tried to create an holistic narrative about what the city is and what the city wants to become,” says Liakou.

Although the city has a rich heritage, is an active port and has the largest student population in the Balkans (150,000 students), it had clearly not been immune to the economic and political crises in Greece in recent years.

There has been a steep reduction in manufacturing, high unemployment, a lack of opportunities for young people and severely restricted public sector budgets at a time of increased social needs. As the resilience strategy itself states: “Tensions have led to the rise of extremism, riots, and civil unrest, and broken down relations between residents and public authorities.”

Despite the large youth population, the city’s greatest demographic challenge is ageing, with a sharp rise in the number of residents over 65 years old. In addition, the city has always been a haven for refugees and now hosts a new wave from Syria and elsewhere. An estimated 15 per cent of Greece’s total refugee and immigrant population resides in metropolitan Thessaloniki. While many are in transit to other destinations in Europe, a significant number are expected to remain in the city.

The city is densely developed with only 2.6 square meters of green space per resident, compared to the European average of 8-10 square metres. This means a shortage of leisure environments and intensifies the impact of natural phenomena such as high temperatures during the summer and intense rainfalls during the winter.

Many of the buildings are old, badly maintained and energy inefficient, particularly in poorer neighborhoods. Linked to this, mobility is a major problem and contributes to poor air quality, one of the city’s key current priorities. Limited public transport means heavy reliance on cars.

Thessaloniki is also vulnerable to major natural hazards and shocks such as earthquakes, urban floods and forest fires, as well as seasonal and weather-related events that interrupt city services and business continuity.

However, when things are at their lowest ebb, so there is often the greatest propensity for change. As the strategy states: “On the positive side, these circumstances have also inspired an increase in citizen-led initiatives, solidarity networks, new skills and resource sharing systems, and demand for more active participation in the everyday life and decision-making processes of the city.” 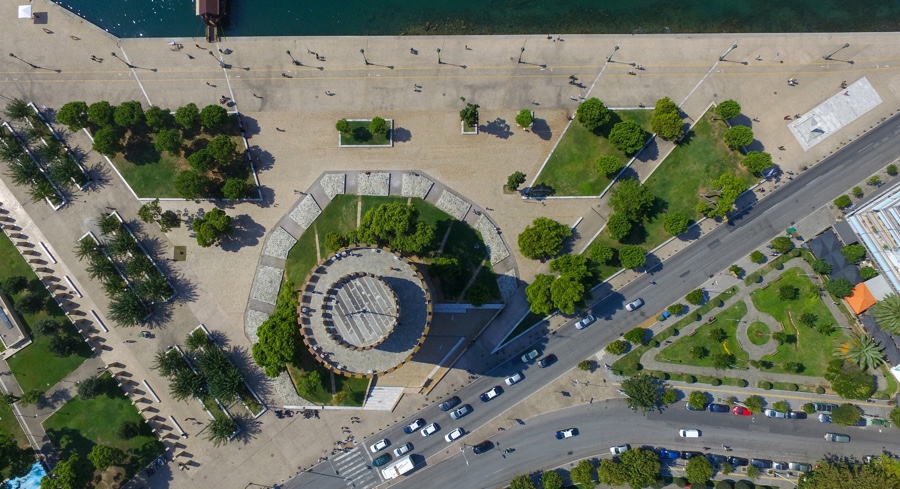 Part of the task of putting together the resilience strategy, says Liakou, was attempting to define the city’s assets, including human talent, and linking this to economic assets. There had previously been only scattered discussions so the work involved partnering with NGOs, youth groups, academia and the voluntary sector. “For the first time we could see a clear way to collaborate.”

This citizen engagement was key. “One of the main principles was to do something that not only had consensus from the administration but also had consensus from citizens and from the city as a whole,” she says. In total, 40 organisations and 2000 citizens were involved. But she emphasises that this involvement doesn’t end when the strategy is published; it continues across all of the areas identified for action.

The resilience report can be read here: http://www.100resilientcities.org/strategies/thessaloniki/#/-_/

For background on 100RCs and to read about the resilience efforts of another fascinating city, Pittsburgh, click here: https://smartercommunities.media/society/pittsburgh-building-resilience-steel-city/

In part reflecting its long maritime trade history, there is an international and outward looking dimension to Thessaloniki’s strategy. One aspect relates to the refugee flows and the coordinated efforts to respond to this from cities and agencies. “We don’t see it from a crisis aspect but see it as a long-term reality, with connected issues such as urban planning, economic and cultural,” says Liakou.

Another big workstream was positioning the city as a new tourist destination, creative hub and education hub. For the first time it has also defined sustainable development goals and a climate change strategy, which include green infrastructure, a circulate economy and mobility.

A flagship development has been the waterfront, Thermaikos Bay, which has opened up this area as the main public space in the city and the top tourist attraction, albeit with plenty of potential for further enhancement.

One of the biggest projects in the country, which has been underway for more than ten years, is a new metro system for Thessaloniki but there had been no discussions about the surface impacts of this, including how it will change dynamics in the city. “We need to look at how we avoid creating new risks and new stresses,” says Liakou.

The actions include small scale as well as the more grandiose, she says, including developing local ownership to enhance open spaces. For air pollution, she says, there needs to be a system to monitor and evaluate this, so that decisions don’t create new problems.

What about the austerity issue, which hangs over the resilience efforts of Thessaloniki and other cities? This is part of the overall resilience thinking, says Liakou – how to maximise resources and budget, combined with new sources, including European funding, private donors, and investors. The World Bank and European Investment Bank have been supportive, seeing the opportunity to pilot new solutions.

And a lot of investors want to invest in cities, she points out, so this requires efforts to close the gap between projects and ideas on the one hand and investors on the other. “Cities need money and investors need somewhere to put their money.”

Cities must better understand investment and there is work to be done in areas such as green infrastructure to improve the way that returns can be measured. 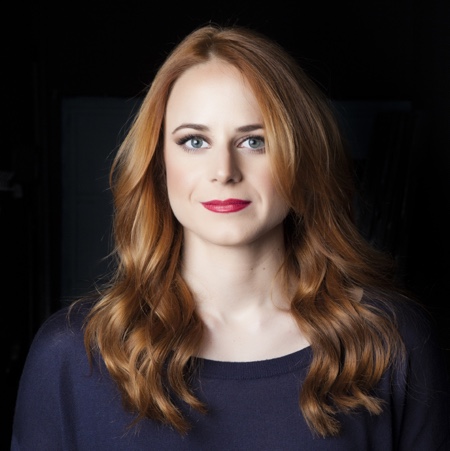 She points to the work by the European Investment Bank in Athens in defining a loan framework to support the development of resilience for that city.

To date, the main emphasis of 100RCs has been to support cities in producing their strategies, says Liakou. That includes “scaling up” so that the work done by the 100 cities can be transmitted to the thousands of other cities around the world.

“If we can’t produce the evidence base then it doesn’t make sense just creating great strategies.” This is the next level of information sharing. “Helping them with their every-day work, not only creating a high-level network but an understanding of how cities did it, what were the lessons, what were the challenges.”


Finance is part of this so 100RCs is developing a finance team that can work more robustly with development banks and other large financial institutions. This will complement the skills that have already been built up across public, private and non-profit networks.

But Liakou also emphasises the importance of local partners. This was something that was done in Thessaloniki, such as working with the local university on urban planning, so that the skills are developed on the ground to continue and evolve the work.

“How can we facilitate the cities to implement and not have the issues that cities usually have about funding, so that projects are semi-baked. This is our challenge for the next few years,” she concludes. The answer will determine the success or otherwise of 100RCs.
By Martin Whybrow|2018-02-02T09:43:24+01:00Feb 2nd, 2018|Society|0 Comments