Last week I was pleased to attend online, a live-streamed discussion hosted by the Overseas Development Institute (ODI) between author and economist, Kate Raworth, and chairman and businessman, Michael Liebreich. The topic was ‘Can green growth solve climate change?’

First thing’s first: both Kate and Michael agreed at the outset that the title was problematic: it would be ‘terrible’ if we just took green growth as a panacea for climate change – there’s so much more to do to address the environmental crisis.

The talk’s title aside, the thrust of the discussion became more about identifying what green growth is, what language we should be using when we talk about it, and how we build successful economies in light of climate change. Kate and Michael’s differing views are evidently representative of a much wider ongoing political debate, one that brings into question the dominant neoliberal capitalist paradigm – and its problematic relationship to the the natural world.

The conversation between Kate and Michael came about through a ‘lively’ discussion on Twitter. Kate offered Michael a free copy of her book if he agreed to meet in person for a proper conversation. Both have links to the ODI, so it was seen as a good place to host the talk. Chair of the ODI Board, James Cameron, mediated the discussion and brought a lens of global sustainable development to the conversation – as well as adding extra warmth and humility to what was a friendly and respectful conversation between two prominent individuals, who it turns out may have some decent acreage of common ground. 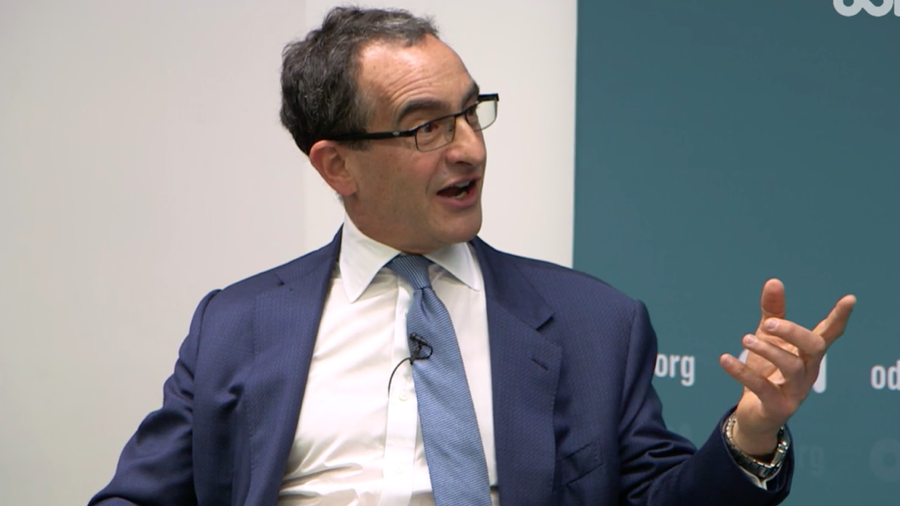 Kate – a self-styled ‘renegade economist’ – is a Senior Visiting Research Associate at Oxford University’s Environmental Change Institute, where she teaches on the Masters in Environmental Change and Management programme. She is also a Senior Associate at the Cambridge Institute for Sustainability Leadership and ODI fellow. Her book ‘Doughnut Economics’ has been translated into 15 languages and aims to re-imagine and redefine an economic system not based on GDP growth, but on – and safely and sustainably within – two parameters: the earth’s environmental boundaries, and a social foundation where the basic needs of humanity must be met for people to lead healthy and fulfilling lives. These two boundaries are the outer and inner circles of her ‘doughnut’. Kate has written for various journals and for the UN Human Development Report, and has worked for Oxfam. She’s also one of the top ten tweeters on economic transformation.

Michael is the Chairman and CEO of his company, Liebreich Associates, through which he provides advisory services and talks. He is also the founder of Bloomberg NEF and Visiting Professor at the Energy Futures Lab, Imperial College London. His focus is on green energy and transport, infrastructure and technology; he was on the board of Transport for London. Michael appears unabashed at nailing his conservative colours to the mast, but during the talk made a clear distinction between ‘conservative’ and ‘corporatist’. Amusingly, at one point he suggested that perhaps he is the only ‘Marxist Thatcherite’ out there. Michael was also an Olympic downhill skier.

Having debunked the title of the talk, Kate started the discussion by outlining her theory of Doughnut Economics. Having come equipped with a range of props, she picks out an inflatable ring to demonstrate her theory. To more clearly explain the theory here, here’s a diagram taken from her book: 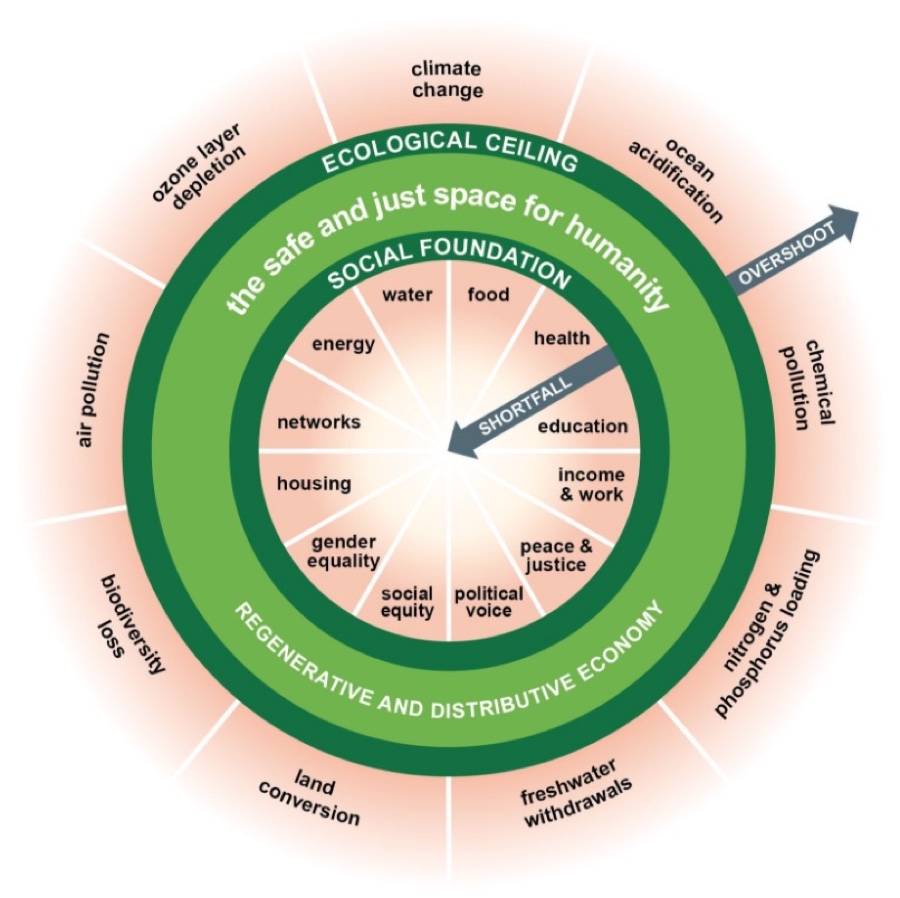 On the outer circle are the main environmental boundaries we need to operate within to ensure we don’t exceed the limits of what our planet can sustain and renew itself within. This planetary limits model was first put forward by a group of Earth system and environmental scientists, led by Johan Rockström of the Stockholm Resilience Centre and Will Steffen from the Australian National University. Kate’s version gives the following environmental issues as the main areas of planetary limits: climate change, ocean acidification, chemical pollution, nitrogen and phosphorous loading, freshwater withdrawals, land conversion, biodiversity loss, air pollution and ozone layer depletion.

What Kate has done to the existing limits model is draw an inner ring: a social foundation. This includes all the things needed not just for human survival but for healthily functioning societies and individual wellbeing. These issues, on the inner social foundation ring are, in essence, universal sustainable development goals: water, food, health, education, income and work, peace and justice, political voice, social equity, gender equality, housing, networks and energy.

To elaborate on her model, Kate highlights the ancient Greek concept of ‘enough, but not too much’ and challenges what was the 20th Century’s focus on growth. Plucking another prop from her collection, Kate uses a flexible hosepipe to demonstrate the onwards and upwards ‘growth’ model which has been at the heart of our economic system (measured by GDP) throughout the previous century. She then raises an interesting point: that no such model exists in nature – nothing grows forever. Natural systems are regenerative by design. In nature, things grow, they level out, and then they die. So why are we clinging to an economic model based on a design that exists nowhere in nature, but simply in our imagination?

Michael makes it clear that he is by no means a fan of GDP, but Kate challenges him to identify what growth is, and what is this ‘growth’ that ‘we all want’, if it’s not GDP. His quick answer to what it is that can grow forever is: human prosperity and wellbeing. 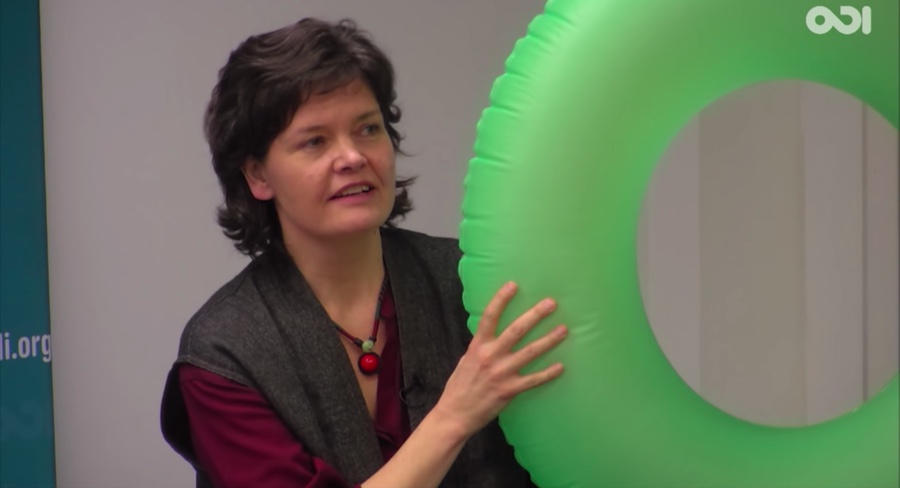 
Michael identifies the wealth of humans to include financial wealth, intellectual capital, health, cultural capital, social and natural capital. He is keen to steer the conversation away from GDP as it’s not something he holds to be the measure of human success; what he’s talking about is wealth across a broad range of categories, as he believes that these equate to human wellbeing.

Already, we can see that what Michael holds to be important for society to flourish and humans to have life satisfaction indeed lines up with what Kate considers to be the social foundation of her ‘doughnut’. Yet, for me, it’s now clear where the crux of Kate and Michael’s political division lies: the perceived imposition of limits to human endeavour.

Interestingly, Michael says that having read Kate’s book, he agrees with 80% of it. He states he is completely committed to the issue of living within planetary boundaries – not just climate change, but nitrogen loading, biodiversity and all other major environmental limits. He is also committed to human development. But what he says was the main point that niggled in Kate’s theory was whether this balance between planetary limits and social foundation is ‘a balance we have to find’ or, in fact, a ‘balance we have to create’.

Innovation is clearly at the heart of Michael’s position. And he struggles with the thought that we have to give up things in the name of finding this happy ground for human existence. He says it’s innovation that will bring about the reform we need across all problematic sectors; reform being the key word – not revolution. He admits that the current economic system has many bugs – and it’s these bugs that are causing the degradation of the planet. Through massive innovation in industries such as steel, cement and agriculture – and the financial sector – we can work to de-bug the economy so it’s gentler on the planet.

He shines a critical light on political power – and makes clear that he is against the current system which allows corporate lobbying and influence in the public political sphere (this is where his reference to being the world’s only ‘Marxist Thatcherite’ comes in). He states, as things are, the system is performing badly. But the way to fix it is through reform, not revolution. His fear is that some sort of economic revolution would break innovation.

A fundamental of Kate’s position is that human beings flourish within boundaries. Limits have always fostered creativity – not hindered it. For instance: the painters with their canvas, Mozart with a set range of octaves, tennis players on a court. Limits do not mean clipping the wings of innovation.

Kate highlights the four main areas of change where we’ve seen radical developments: energy, production, communication and knowledge. In the past couple of decades we’ve departed from singular or linear models in all of these areas, to vast complex distributive networks.

She believes that by fully adopting regenerative, distributive models we can build an economy that respects the inner and outer boundaries of the doughnut. For instance, moving from monopolised ‘glue-shut’ technology like we see in the iPhone, to the ‘right-to-fix’ opennsource model of the Fairphone.

Investment in these technologies, however, is a main point of concern. And current models of investment such as venture capital aren’t fairly allowing what are viable technologies to flourish. Michael sees the future of the economy as a mashup between big companies and small enterprise, a fractal-like model.

For more incredibly salient points and insights into what is arguable the most important topic of our time, watch the discussion which has now been uploaded online at:

Kate’s book, ‘Doughnut Economics’ is available through her website.

And you can find out more about Michael and his work on his website.

Whether you feel it’s an entire revolution of our economic system that’s needed – or simply deep reform of the existing one – Kate and Michael’s discussion brings to the fore all the questions we need to ask ourselves if we’re going to create an economy for the future.

I was left with a sense that there is indeed much common ground between the two, but their conversation is representative of the threshold we now find ourselves in: where we’re moving from a very linear sense of human ‘progress’ to regenerative systems which are much more representative of – and sympathetic with – models within the natural world. There is, of course, a deeper philosophical conversation to be had here, but that’s for another day.