Can you map innovation? Nesta is having a crack at it in Wales

Before asking whether it is possible to map innovation within a geographic area, there’s the question of why you’d want to. Certainly the Welsh Government saw enough potential benefits to kick off a pilot project with UK ‘innovation foundation’, Nesta. The results have recently been published, with an array of visual representations of innovation across the country, within a dashboard project dubbed Arloesiadur (which is Welsh for innovation directory).

Nesta’s Head of Innovation Mapping in Policy and Research, Juan Mateos-Garcia, sees benefits for policymakers, practitioners and the public.

For the former, having a better understanding of what innovation is out there provides an evidence base for decisions, such as where to invest funds to initiate, grow and nurture existing and new enterprises and skills. It also allows policymakers to build stronger messages when seeking to attract outside investment and talent.

For practitioners, the study found that most current collaboration in Wales is local. By scoping the wider ecosystem, new partnership opportunities can be identified.

And for the public, particularly through the use of visualisation tools to open up the data to non-technical users, it can better inform so that, for instance, it could provide direction for education and career paths.

Discussions started a couple of years ago and the project commenced in January 2016. “We kept coming up again and again against the fact that traditional data sources have some important limitations,” says Mateos-Garcia. New industries and innovation ecosystems were often missing. “And a lot of data was not open or not being published in a way that people could use it.”

The project used open source tools throughout and, in the spirit of openness, the code and data from the project has been made open for peer-review and for use by others, via collaborative developer platform, GitHub.

Data was drawn from a wide range of sources such as official websites, open data about industrial activity, social media and other sources including from Gateway to Research (GtR) – an open dataset about publicly funded research – and Meetup.com – a platform used by tech communities to organise networking and skills-sharing events. 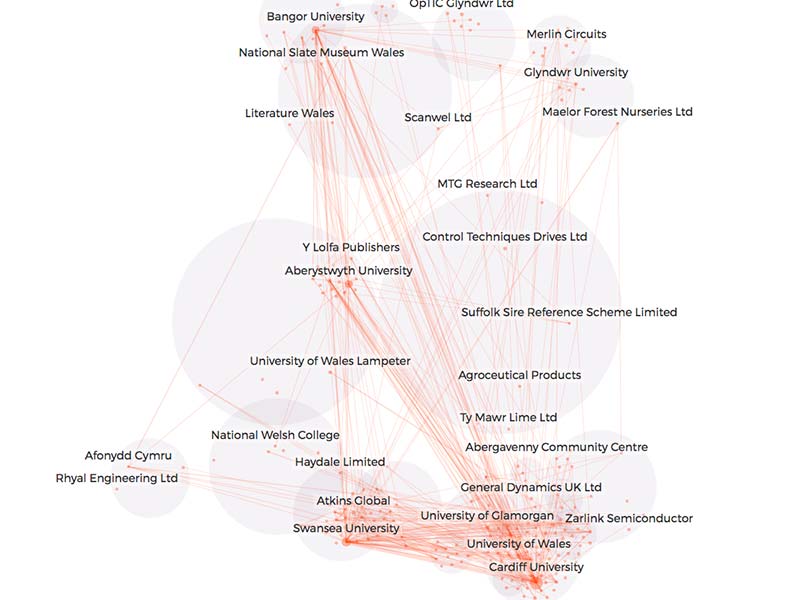 Part of the inspiration for Nesta came from the other side of the Atlantic. Mateos-Garcia cites MIT’s MediaLab and its Observatory of Economic Complexity which has worked within the US and Brazilian economies. There is also the work of Katy Börner at Indiana University around ‘macroscopes’ for analysing and visualising Big Data. “They were very inspirational for us,” he says. “As Cesar Hidalgo at MIT says, one good way to change people’s behaviour is to change the way they look at the world.” Nesta itself had also done work on which this project could draw, such as mapping the nightlife economy of London.

Nesta was initially a UK government initiative set up in the late 1990s to promote creativity, talent and innovation across a wide spectrum of areas and interests. It came to focus on nurturing innovation, in part through fellowships, investment and education. It became an independent charity in 2012 and is now a hub for innovators across the globe, working in partnership on a wide range of projects. Visit Nesta

The Welsh government is aware that it faces significant economic challenges including low GDP per capita and low productivity, and there is a push for innovation within a range of national, city-based and educational strategies. The question is how to measure activities and impacts. The analysis in Arloesiadur tries to address some gaps in the evidence.

Wales was shown to be already competitive in several high knowledge, high value-added manufacturing industries including aerospace and instruments, plus sectors related to the green economy such as energy and environmental services (including recycling and collection and treatment of hazardous waste). The research also identified a corridor of manufacturing activity running from the North East to the Severn Bridge.

Knowledge-intensive and creative sectors where there was shown to be emerging strengths included R&D, robotics, creative services and computing (such as Big Data, machine learning and cybersecurity), albeit with most of this activity seemingly within small entrepreneurial organisations rather than larger employers. A pointer here for policymakers might be how to support start-ups in scaling up and forming connections with other sectors.

The analysis shows opportunities and challenges, says Mateos-Garcia. For Wales and many other economies there is the question of how to develop an innovative, knowledge-intensive economy that generates benefits for all. Wales has a typical ‘hourglass shaped’ economy with a relatively small number of people in well paid, productive and innovative jobs, but with the majority of people in low paid, routine jobs.

How accurate is the analysis? “There is always a risk of bias and it is always important to communicate what these can be, so too the limitations of the data,” says Mateos-Garcia. For instance, within this project, the use of social media could give a bias towards media and other creative sectors, which are likely to be more active on the likes of twitter than their manufacturing and pharmaceutical counterparts.

For the Welsh project, there are discussions now about next steps. This could include new datasets and techniques. This might see scraping information from company websites. There were some attempts to do this but it proved too time-consuming for the first phase partly because of the ‘snowball’ effect, whereby the data expands exponentially due to all of the connections that are thrown up.

There are other data mapping projects in the pipeline. One called Creative Nation will be UK-wide using a mix of official, open and web data to map the country’s creative start-ups (in 2016, Nesta with Tech City UK did a similar project for digital tech businesses – https://www.nesta.org.uk/publications/tech-nation-2016).

A European project funded by the European Commission will look at research and innovation across the continent while another will focus on health innovation, in partnership with a large US health foundation.

Details of each of these will follow shortly from Nesta. Meanwhile, the Welsh project has generated interest from other countries.

There is no doubt that the tools and techniques for Big Data mapping and visualisation are being honed within projects such as these, with the open source aspect meaning that they can be picked up and moved forwards by others as well. In parallel, it would be interesting to revisit the Welsh project in a year or so to see how the work has influenced policy. No doubt the Arloesiadur dashboard itself will evolve, while others will follow for other geographies and other sectors.