Although not one of the largest ports, Dunkerque’s ambitions when it comes to sustainable growth leave some of its counterparts in the shade. The plans include moving traffic from road to rail and waterways; adopting Liquid Natural Gas; and “cold ironing” (plugging in ships to the grid).

At present, Dunkerque handles around 375,000 containers per year but with an increase of ten per cent last year and continuous growth expected for the next few years. In the longer-term, it has a goal of 2.5 million containers per annum by 2035. There is a need to address the increase in traffic.

“We have a very good network for rail and waterways coming into and out of Dunkerque port,” says director of planning and environment, Erwan Le Bris. The need is for the port’s infrastructure and logistics platforms to be upgraded to take advantage of this.

In 2014, work started to devise a logistics plan, CAP 2020, and this is now being implemented following a public consultation period that ended in December of last year. It includes new container wharfs, new platforms close to the railways and waterways plus new inner rails to handle more traffic within the port itself.

The feeder traffic is where the largest container ships (22,000+ containers) – of which Dunkerque can take one at present but with capacity by 2019 for a second being added as part of the current works – are loaded and offloaded via smaller ships. In this sense, it acts as a hub for other ports.

The cost of CAP 2020 is €689 million. Public funding up to €130 million will be combined with expected investment from the EU, French central government and local authorities. The port itself expects to contribute €300 million, with another €255 million from private investors – typically linked to those that will operate within the port.

The increased traffic is in part likely to stem from generic increases in container trade but Dunkerque is also looking to attract traffic from beyond its current Hauts-de-France catchment area, typically around Lille and Amiens. Ever more traffic congestion at Antwerp and Rotterdam is viewed as an opportunity. Le Bris cites traffic from regions such as Alsace and Champagne Ardennes as targets. One benefit of Dunkerque is that, based on studies by the port, the road, rail and waterways networks that feed into the port are all adequate for the projected increases. And as the volume of containers moving by rail and waterways rises, so the unit costs for these routes should fall.

For waterways, there is the wide-gauge canal to the Hauts-de-France, which extends to Belgium and the Rhine and, pending completion of the Seine-North Europe canal, to Picardie. There are already container barge services to Lille, Dourges, Béthunes and Valenciennes.

For rail, the existing 200km of port railway lines are connected to the national and European networks. There is a container rail shuttle to and from Bonneuil-sur-Marne. Dunkerque, France’s third largest port, is already the country’s largest rail freight hub.

As well as the competitive aspects, CAP 2020 has environmental targets. The modal shift to rail and waterways will help reduce the carbon footprint so too, according to the port’s studies, a diversion of road freight from other parts of France that would have gone to Antwerp and Rotterdam. Nevertheless, there will be an overall increase in road traffic for Dunkerque and steps are being taken to reduce the port’s environmental impact.

For instance, since 2016, work has been underway to build the capability for Liquid Natural Gas (LNG) to feed trucks and ships, through terrestrial bunkering, with a scheduled delivery from October 2018. Le Bris points out that international and European regulations should give a boost to LNG so that both ship and truck operators will continue to embrace this.

A refit in Dunkerque of a dredger for LNG is scheduled but in general refitting might be expensive, so it could be that the shift will come with new ships and trucks. Le Bris sees evidence that this is now happening, with new large LNG-enabled container ships currently under construction and with local truck operators also moving this way. 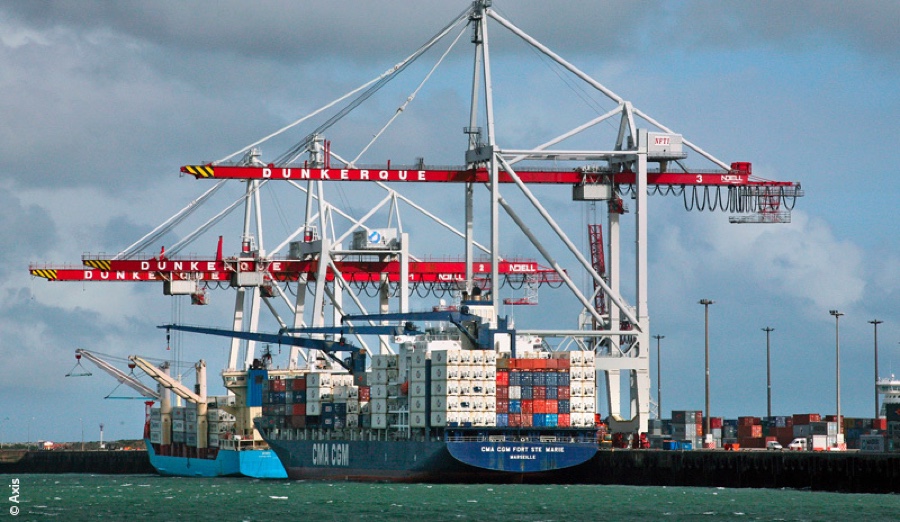 Cold ironing – effectively plugging in ships to the electricity grid when in port – is also due to be available this year. As with LNG, it will be up to the ship operators to adapt for this capability. At present, Dunkerque has not introduced any green incentives to its charges as, for instance, Le Havre has done.

There is a lot of focus on air quality and both the LNG and cold ironing will have a positive impact, significantly reducing carbon dioxide and particulates. LNG would replace auxiliary diesel generators that power cargo handling equipment and other ship services while in port. These are the primary source of emissions from ships in ports because the auxiliaries run on heavy fuel oil or bunkers. There is independent measurement of air quality in the port, so too for the wider Dunkerque area, with multiple partners having their own action plans.

Major steps are scheduled for this year at Dunkerque which, with all due respect, some larger ports, such as Dover and Calais, are only now considering – https://smartercommunities.media/setting-sail-low-carbon-future/ Clearly, there are multiple drivers behind Dunkerque’s ambitious plans – competitive, regulatory and environmental ones. The good thing is that these are mostly in harmony, so much of the investment covers two or all three of the drivers.
By Martin Whybrow|2018-03-28T08:40:19+01:00Mar 28th, 2018|Economy|0 Comments