When looking at smart city initiatives, it is easy to be drawn to the largest Dutch cities but, less obviously, there are interesting things afoot elsewhere in the country. Dordrecht is a case in point.

“Dordrecht is usually very modest,” says smart city project manager, Gea Davids. “We tend to do our own thing but I think we need to go out into the world and tell a bit about what we are doing.” Indeed, on a number of fronts, the city has interesting projects under way, across areas such as social inclusion, waste management, air quality and health.

The interest in ‘smart cities’ started a few years ago, says Davids, in part because there was a lot of infrastructure that was due to be replaced and it was felt there should be smarter ways of doing things. In particular, the head of the city’s physical maintenance department was enthusiastic about innovation.

Dordrecht is the fourth largest city in the Netherlands and resides on an island bordered by a network of rivers. It has an historic centre and the combination of old buildings and water brought an initial use of sensors that has since been extended.

A lot of the buildings have wooden foundations, which will rot if they become too dry. This means maintaining water levels is critical. It was a laborious monthly task involving manual checking of some 500 tubes. A trial was successful using sensors in the tubes to provide real-time information on water levels.

It was felt that this approach could be applied elsewhere to improve efficiency. An example is sensors that are now in the city’s waste bins to record when they are full. As part of a Dutch ‘Living Labs’ initiative, Dordrecht is also now applying sensors to measure air quality and noise, initially in an industrial part of the city, with the first ones installed a couple of weeks ago.

Quite a few of the initiatives have stemmed from an innovation fund whereby the city supports companies, citizens and educational establishments with projects of up to two years that “add to the livability of the city”, says Davids. Around ten projects have been granted funding.

One recipient is Ranmarine, a Rotterdam-based company that has a product called WasteShark. The device was launched this week on the canals of Dordrecht. It is used to clean up plastic, which it does via a filter. It is controlled, drone-like, from the side of the waterway and also includes sensors that can measure water temperature and pollution levels, particularly with a view to early identification of algae that can build up on the canals in the summer.

WasteShark’s sensors also measure depths to better identify when dredging is needed. To date, the device has mainly been used on coastal waters. “This is the start of a three month experiment for them to further develop the product for inner city cleaning,” says Davids. There is joint cooperation between Ranmarine, the city’s water board, the municipality, the waste company and an environmental NGO. 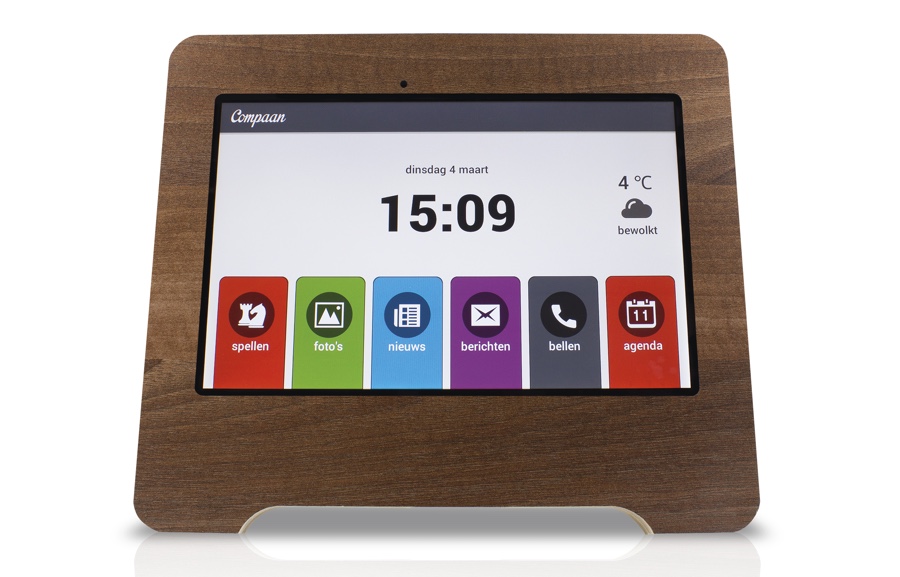 Over six months, the city has also trialed, and will now roll out more widely, a product from another Dutch company, Compaan. This is a straightforward computer tablet that supports people and their carers. They can communicate remotely using a Skype-type link but with the user having no need to understand the technology. Facilities include a morning wake-up message that the user can send to the carer and other messages such as to confirm that they have taken any medication, with alerts to the carer if this doesn’t happen.

Carers can also upload pictures and messages from an app. In this, the device has similarities with that of Norwegian company, No Isolation (https://smartercommunities.media/applying-technology-break-social-isolation/).

In a similar social area, the city is supporting an existing Utrecht-based company with a website, www.thuisafgehaald.nl (shareyourmeal.net in English), which connects neighbours who like to cook with those that are seeking a meal. While well-established and hugely popular, the work with Dordrecht – which was pitched to the municipality at the end of last year – will take the form of a trial to try to bring the capabilities to people who are not internet-literate.

“We would like to see more of this kind of initiative, to develop further into the social domain,” says Davids. The city will seek to apply technology and other solutions to meet its main challenges. In the next 15 years there will be the need for 10,000 new dwellings and, in the same timeframe, the number of people over 65 will increase by 45 per cent.

Mobility is likely to be a big issue. The aim is to discourage car use as much as possible, through initiatives such as a free app-based bike share scheme. Another area of focus that she cites is town planning, with the potential to apply technologies such as 3D printing

Compared with the big three Dutch cities – Amsterdam, Rotterdam and Utrecht – Dordrecht has smaller budgets and less profile at present but, along with its neighbours, it is busy in a range of areas, both with city-specific projects as well as within wider national ones, such as the Living Lab. These remain relatively early days but with every successful project, so others are born and confidence grows in finding new solutions to often age-old problems.