With the emergence of electric and autonomous vehicles, why would you want to run lorries on overhead electrical lines? Siemens is adamant that there’s a good case for them and a trial in California has just started, to add to others in Germany and Sweden. But is this really the future of road freight?

The most established public trial, in operation since June 2016, is 100km north of Stockholm, on a 2km one-direction stretch of the E16 highway, working with vehicle manufacturer, Scania, and two trucks. Sweden has set ambitious climate targets including having a fossil fuel independent transport sector by 2030.

In California, a one mile, two-direction zero-emission eHighway demonstration was launched last week in the city of Carson, near the ports of Los Angeles and Long Beach, with three hybrid trucks. Here, Siemens has been working with Volvo and local truck retrofitters.

In Germany, there has been a non-public test site since 2010 (so the technology hasn’t rushed onto public roads) but now things are moving ahead for three pilots. Siemens has won the first of three public tenders. This is from the state of Hesse for a 10km stretch of the A5 federal autobahn between the Zeppelinheim/Cargo City Süd interchange at Frankfurt Airport and the Darmstadt/Weiterstadt interchange. The other two tenders are still awaiting decisions.

Hasso Grünjes, Siemens’ head of eHighway, says the technology is still viewed by Siemens as at the R&D stage but, despite not actively selling it yet, it is seeing interest from around the globe including from China, India and other Nordic countries.

Despite the relatively slow incubation, there seems to be something in this technology, so what’s behind it? The need to decarbonise the transport sector is well understood, says Grünjes, but while there is a lot of activity for cars, there are specific issues when it comes to lorries, particularly around charging batteries. While cars might be idle for 95 per cent of the time, so giving plenty of opportunity to recharge, this isn’t the case with lorries and clearly there is the much greater weight issue as well.

The technology is similar to that used for trams and electric trains. On electrified lines, the vehicle uses the electric power for propulsion. On non-electrified routes, the truck makes use of its hybrid diesel-electric drive system. Rather smartly, braking and accelerating trucks can exchange energy with one another via the contact line, as can those traveling uphill and downhill. Vehicles are able to feed braking energy back into the grid in the form of electricity. Vehicles can connect and disconnect at speeds of up to 90km/h.

The method significantly reduces CO2, NOx and particulate emissions and in California a main reason for the initiative is to improve air quality. The toxic air in the port areas has a major impact on the local communities and the pilot is within the South Coast Air Quality Management District. The state as a whole has a target to cut Greenhouse Gas emissions by 80 per cent by 2050.

Independent analysis of the payback period in relation to the investment is on-going but Siemens claims that compared to the combustion engine, the hybrid drive is around twice as efficient, has a longer service life and requires less maintenance. In California, Siemens has estimated that a Class-8 truck driving 100,000 miles on an eHighway would save, at 2017 prices, $20,000 in fuel.

The Stockholm project has produced very good results, says Grünjes. A common comment from those involved, he says, is that “the project suffers from a lack of problems”. It has shown that the technology works on public roads and it has proven the reliability of the vehicles. The project was for an initial two years but has now been extended. The E16 connects the industrial regions of Dalarna and Gävleborg, dominated by steel, pulp and paper, and mining industries, with the port of Gävle.

Siemens’ expectation is that the eHighway will be particularly effective on heavily used truck routes such as in California. This is between ports or industrial estates and cargo hubs, or between mines and central trans-shipment terminals. 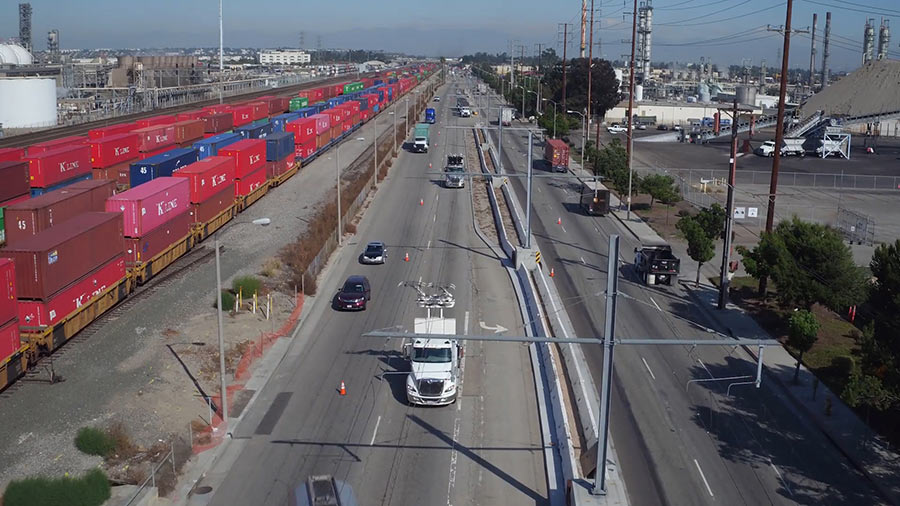 These are still early days for the eHighway and there would need to be many more compatible trucks for it to start to make a dent on what is clearly an urgent need. The World Business Council for Sustainable Development (WBCSD) predicts that global freight transport volumes will have tripled by 2050 from 2000, with rail only able to handle around one-third of the additional freight traffic.

Whether eHighways can play a significant role remains to be seen but as the pilots multiply, so the evidence base will build.