EVs only better: The emergence of solar/plug-in hybrids

Eindhoven-based start-up, Lightyear, has taken the first 120 reserve orders for its all-electric solar car, with delivery planned for mid-2021. Meanwhile, a company spun out of Deutsche Post DHL, Trailar, is installing solar matting on a range of freight vehicles, including DHL’s own fleet, a first FlixBus and waste collection vehicles in Singapore.

Is this the next generation ‘hybrid’ – solar topped up from the grid? Advances in solar technology are driving the innovation, with lighter, more efficiency options that open up new possibilities.

Lightyear has understandably generated a lot of interest. Its solar panel design was born out of the solar-powered cars of Solar Team Eindhoven from the city’s University of Technology. Its vehicles won the Cruiser Class category in the World Solar Challenge, a biennial road race of 3022km through the Australian Outback, on three consecutive occasions.

The team looked around for the emergence of commercial solar cars, says Arjo Van Der Ham, co-founder and chief technology officer. On drawing a blank, the decision was made to do it themselves. 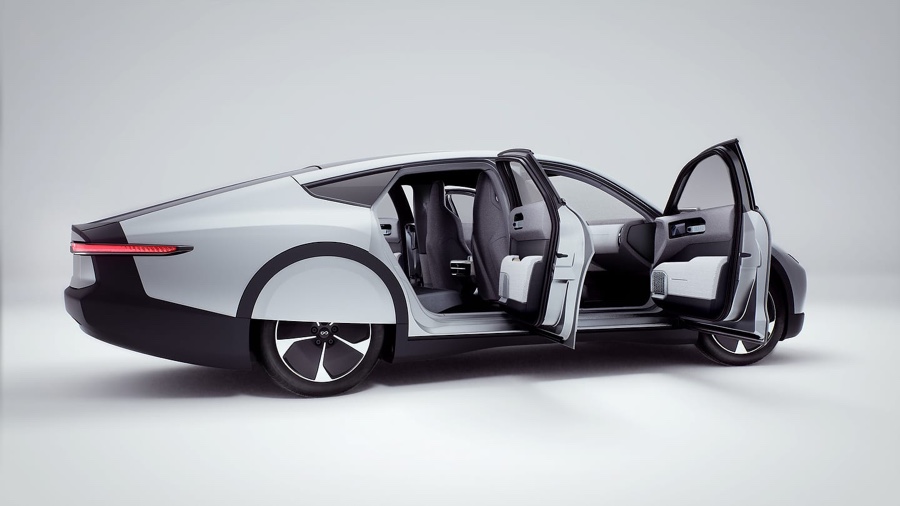 The sun is the most convenient charger, says Van Der Ham, followed by a household electric point. The challenge was how to harness these and that meant starting with a clean sheet of paper.

A large part of the work has been to reduce energy consumption and optimise the aerodynamics. The body is aluminium and carbon fibre, which has meant smaller batteries and motors, which further reduces the weight. There are four in-wheel motors which, as well as lowering the weight, means no energy is lost between the motor and the wheel.

The roof and hood of Lightyear One comprise five square metres of integrated solar cells so that the vehicle charges itself whenever it absorbs daylight.

The solar roof and hood charge up to 12km/h in the sun. The company claims that someone driving the national average of 20,000 km per year in the cloudy Netherlands would cover about 40 percent of their mileage from solar energy. Lightyear also claims that fast-charging will bring up to 570km worth of energy within an hour and the overnight charge with a simple 230V outlet is up to 350km worth of energy.

A challenge, says Van Der Ham, was adding that number of solar panels without impacting the aerodynamics while still looking good. With each design iteration, the company chipped away until the amount of energy from the sun was more or less on a par with energy usage. Even at 30,000km per year, he believes that one annual fast charge should be sufficient.

Lightyear has built a prototype and is due to release 946 vehicles as part of an exclusive release. There is a refundable reservation payment of €4000 and the provisional purchase price, including 21 percent VAT, is €149,000. Solely for the Netherlands, there will be a lease option. Models at a more reasonable price point will follow, says Van Der Ham.

Of course, Lightyear is not the only new kid on the block. In Germany, Sono Motors is seemingly slightly further behind (taking pre-orders but not starting production until 2022) but is promising a much lower priced offering, the €25,500 Sion.

The Sion will have 248 solar cells integrated into the body. Sono Motors claims that in Germany, for instance, solar can generate up to 34km of additional range per day. Overall, it claims an additional range of up to 5800km per year. With a recently raised €50 million through donations, down payments (it has 13,000 pre-orders) and personal investments, it is financing building a series of additional prototypes, commissioning tools and production facilities. Production is planned to be with 100 percent renewable energies in a former SAAB factory in Sweden.

While this pioneering work has been going on, there has also been interesting progress with solar for fleet vehicles. The initiative came out of what Trailar co-founder, Aaron Thomas, describes as a “Dragon’s Den” type scheme by DHL to generate new ideas.

With his DHL colleague, Denny Hulme, there were discussions with UK universities, Silicon Valley solar manufacturers, trailer companies and others. Out of these came the conclusion that solar matting could be used to power equipment such as trailer lifts, headlights and air conditioning, saving fuel and reducing emissions. 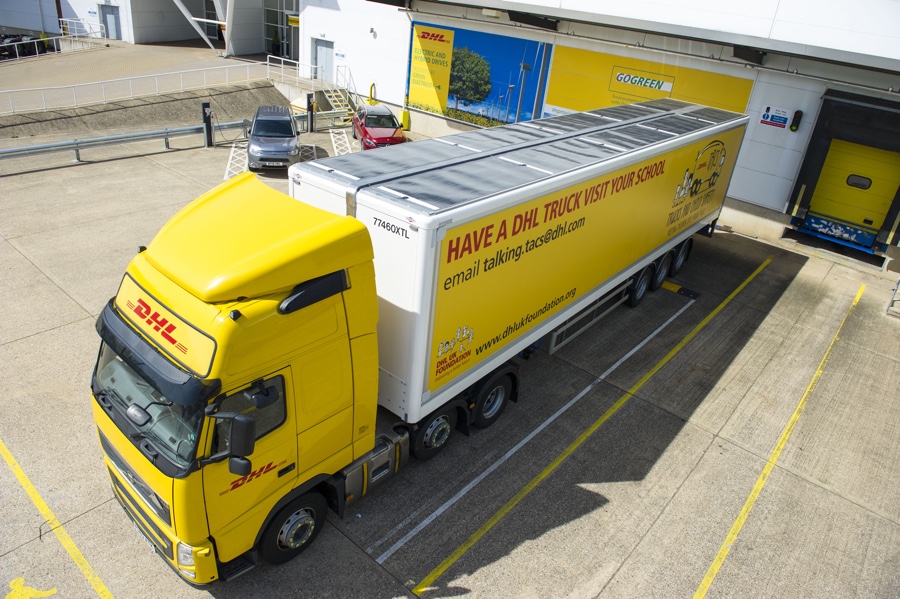 DHL has invested in Trailar, which was set up to take the technology to market. There are the mats themselves, with the technology having evolved sufficiently to turn the vision into reality. They have 18 percent efficiency, are light – 2kg per m² – are just 3mm thick so are aerodynamic, have good shade performance (a loss of about 10 percent), are shatterproof and durable.

They are sourced from Santa Clara, California-based MiaSolé, a specialist in thin-film Copper Indium Gallium Selenide (CIGS) modules, cells and equipment and a subsidiary of Hanergy Thin Film Power Group.

The other part of the solution is the smart charge controller, which hooks up the solar to the battery. Thomas describes this as “the brains of the system”, collecting real-time data including energy savings, and linking to the fleet management system and GPS.

The panels and charger can be installed in three or four hours and cost £1800 for a rigid vehicle and £2500 for a trailer. A benefit of the latter is that the system provides power, such as for a lift, even when the trailer is decoupled from the cab. There is a version for refrigerated vans.

On rigid vehicles, says Thomas, there is a fuel saving of around fiver percent, with a return on investment (RoI) of 12 to 18 months. For a trailer, the fuel saving is around 2.5 percent but he says the typical RoI is still less than two years.

The solar mats are now on 1000+ vehicles. Trailar’s aim is 5000 by the end of this year. DHL has them on vehicles in Thailand and South Africa, with the US on the way. Large US company, Ryder Rental, has taken them for its rigid trucks in the UK. They are on a number of buses in the UK and on a first FlixBus, for its Dortmund to London route, with a claimed seven percent fuel saving for the latter, even in the winter months. Alba Group in Singapore is putting them on its waste collection trucks. Other customers are Royal Mail, Johnson & Johnson and Go-Ahead.

There is the potential with solar to counter some of the common arguments against EVs, to do with pressure on the grid, overall lifetime carbon footprint, range and convenience. Whoever are the winners in this space (and it is fair to assume that current car manufacturers, at least, will pile in at some point), Lightyear, Sono Motors and Trailar are pioneering vehicle technology that could change the face of EVs for the better. 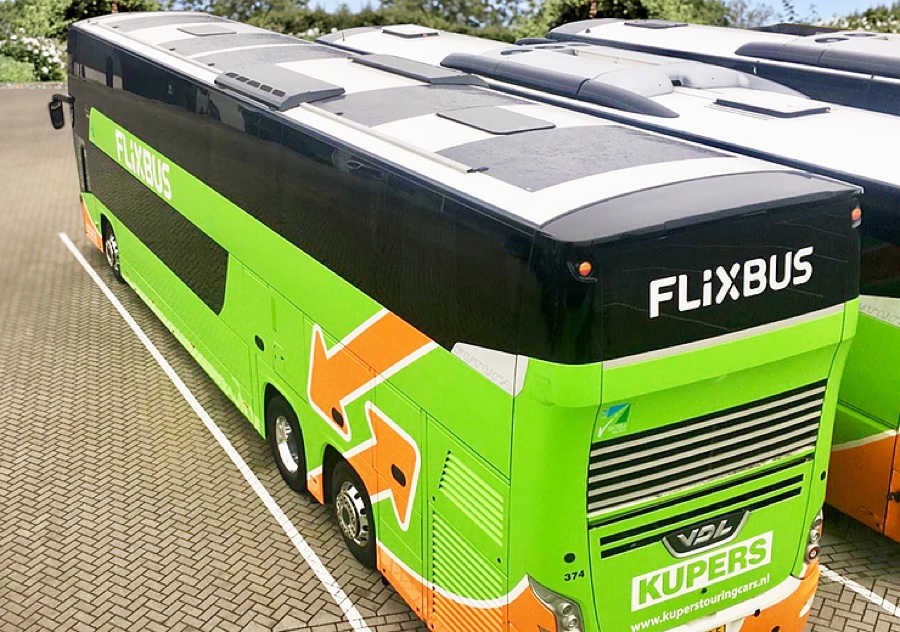 The first FlixBus with solar mats