This week, as COP24 begins in Katowice, Poland, a new wave of climate activism is rippling around the world. Within a short space of time, the Extinction Rebellion (XR) movement gained momentum and significant media attention. It started with a call for civil disobedience and nonviolent direct action on the 31st October, with a Declaration of Rebellion made in Parliament Square. This was followed by a series of disruptive events in London leading up to a major protest, or Rebellion Day, on the 17th of November, which attracted an estimated 6,000 participants, myself included.

Five major bridges in London were occupied: Southwark, Blackfriars, Waterloo, Westminster and Lambeth. Over 80 protestors were arrested. Prominent environmentalists including journalist, George Monbiot, and Green Party member of the House of Lords, Jenny Jones, were present. British artist, Gavin Turk, was arrested. The group has coordinated further actions in London and around the UK, and has a global week of rebellion planned for April next year.

But with such a powerful and visible entrance onto the scene, can the movement maintain momentum and continue to gather the support of normal citizens here and around the world – or will the nature of XR’s activities and its image only serve to polarise?

The demands of the movement

The group has three key demands that they want the Government to meet. These are:

The demands are drastic, and many say unrealistic. Members of the group, however, argue that economies have shifted gear incredibly quickly and effectively in the past in response to existential threat. The world wars saw swift adoption of new technologies. And there was a general acceptance that individuals had to make daily sacrifices, as business as usual was suspended. We could, in theory, switch into emergency mode now: but getting the government and the general public to recognise the urgent nature of the environmental crisis is proving to be a tough and arduous job. 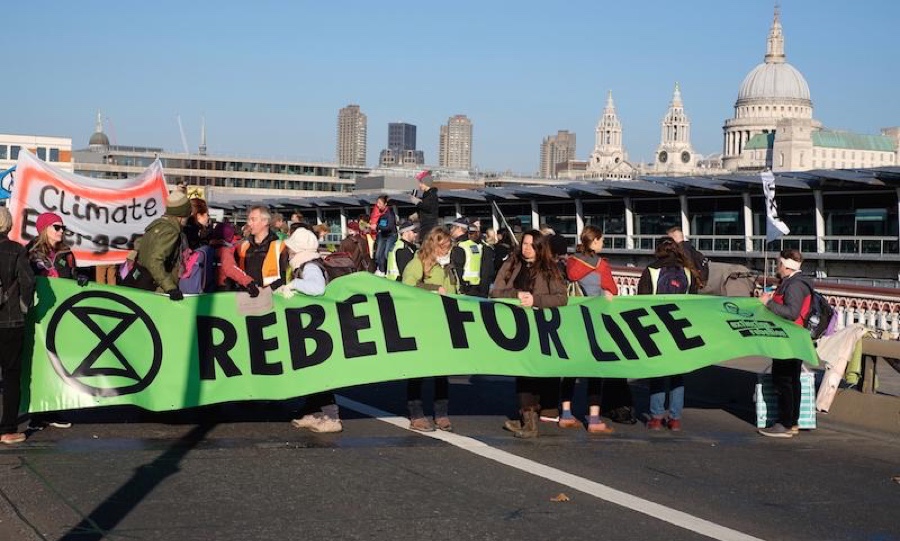 Most people must surely, on at least some level, feel concern about the key findings of October’s IPCC report: that we have just twelve years to limit the worst possible impacts of climate change (Enough “green-wash”: The 1.5°C rallying cry). Or, as reported by the WWF, that humans are responsible for 60% loss of animal populations since 1970.  Or, as David Attenborough has stated at this week’s COP24 conference, “If we don’t take action, the collapse of our civilisations and the extinction of much of the natural world is on the horizon”.

A major challenge is conveying the reality and seriousness of these messages. XR must do this in a way that doesn’t scare people into inaction, lead them to feel that the environmental crisis is a lost cause, or even cause them to retreat further into denial. What’s more, the facts sometimes aren’t enough. Building a good image for the movement is everything if they want to have the widest possible reach. After all, according to the group’s website, it will require mobilising 3.5% of the population to achieve system change. That’s a lot more than your average protest rent-a-crowd.

As clear as day

Safe to say though, having taken part in Rebellion Day on the 17th of November, the crowd XR is attracting in its nascency is broad. I was unsure what to expect, and felt perhaps a bit intimidated prior to going. I almost didn’t go because I had my son that weekend, but when I checked the Twitter feed that morning, I read that Blackfriars Bridge had attracted loads of families, so that’s where we headed.

When we arrived, the atmosphere was as warm and sunny as the day, the weather fittingly unseasonable for a climate change protest. It was equally heart wrenching. The profound tragedy and reality of the situation rang clear. I looked at my six-year-old son and felt a sense of deep sadness about what the future might hold. Would he ever see the Great Barrier Reef in its living, iridescent glory? It played such a huge part in my early experiences and understanding of the natural world, growing up in Queensland, Australia (And what of long-haul air travel; what are the future realities of us having roots in Oz if we’re to really curb emissions to a safe point?).

I’m by no means a seasoned protestor. Nothing prior to the current environmental crisis and recent scientific findings has moved me so deeply. And I sensed that many people there that day could say the same. The shared sense of purpose was powerful, as was the symbolism: a coming together of random strangers to give voice to the natural world – smack in the historical centre of the industrial world. The friction between those two worlds, palpable. 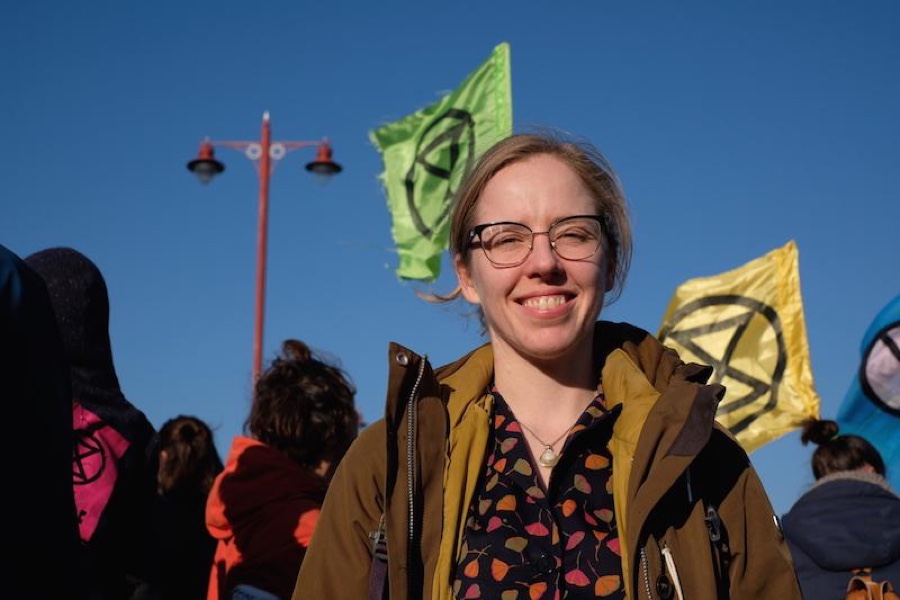 These are fragile times – politically, socially, ecologically. Coordinating a movement that can affect real change, as with the Suffragette and civil rights movements, requires care and consideration. The language and messages used must serve to cast as wide a net as possible. It can’t be haphazard. The movement must be inclusive, in no way intimidating, and try its hardest to avoid situations where activists can be represented in the press as troublesome pranksters. Yet with a decentralised, non-hierarchical structure where semi autonomous groups seed and spread, Extinction Rebellion may struggle to stay on point and keep its appeal.

Creating a movement for the masses

The environmental issues are real, they’re serious, they do indeed demand urgent action. But for the wider general public to accept or even participate in civil disobedience of this nature, XR needs firstly to effectively communicate the urgency of the environmental crisis. It then needs to appeal to our shared values of compassion and love for fellow human beings and future generations; from this comes the impetus to act.

For the most part, XR seems to be doing these things consciously, and effectively. But there are perhaps some elements of their communication that jar against this approach. Images of skulls and slogans such as ‘Climate change = mass murder’ are probably too extreme for the general public to stomach. They certainly don’t communicate the inclusivity that’s surely so important for the movement to survive – and achieve the 3.5% critical mass.

We all hold values of care and compassion to some degree. Tapping into these values through effective communication is critical to gain wider public support. Using scaremongering, appearing aggressive, and projecting a stereotypical image of activists might cause what should be a movement for the masses to lose steam: leaving just a core group of die-hard protestors.

Coming together for a common cause

According to the Common Cause Foundation, more people hold universal values of kindness and compassion than we might think. Their research, along with that of others, has shown that emphasising these positive intrinsic values can go a long way in gaining support for environmental causes. The last thing you want to do is challenge contradictory individualistic values.

For instance, using images of skulls and messages designed to shock, may grate too heavily against people’s existing values of safety and security. These are certainly values held within the conservative reaches of society; you’re not to gain any friends there, by challenging these values.

But lo and behold: all colours of the political spectrum have the capacity to care. Tapping into this is key to building a successful environmental movement that transcends party politics. That’s not to say that a gently-gently approach is what’s needed. Civil disobedience and nonviolent direct action is perhaps the only viable option when all other avenues such as sanctioned protests and advocacy have failed. But the movement may need to avoid extreme messaging, if it’s to gain the support of as many people as possible. 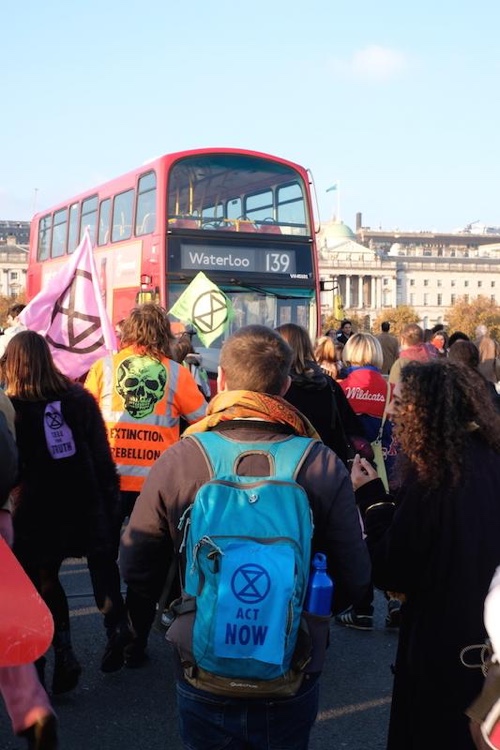 We’ll see over the coming months whether Extinction Rebellion can attract the numbers it needs to instigate far-reaching change from the bottom up. On the ground, the energy of the movement is exciting, positive and supportive. And in the ongoing hope that swift action comes from the top down – we’ll hold tight and see what comes of COP24.

You can find out more about Extinction Rebellion including upcoming events, at https://rebellion.earth/