Flying organs: The potential role of drones for transplants

There is a lot of hype about the use of drones but a high-profile example of where they are already starting to prove valuable is in delivering human organs. The pioneer has been the University of Maryland School of Medicine, which last year completed the first flight by an unmanned aerial vehicle (UAV) of a human kidney for transplant.

A company spun out of the initiative, MissionGO, is now seeking to turn this into a mainstream means of transportation, thereby addressing some of the inefficiencies that beset current practices.

Today’s system for organ transportation has evolved, it wasn’t designed, says Dr Joseph R. Scalea, a multi-organ transplant surgeon at the University of Maryland School of Medicine and the University of Maryland Medical Center. It was within his work to try to eliminate the ongoing organ shortage, which has devastating effects on patients with organ failure, that he started to consider how to improve the organ delivery supply chain.

In the US, at the time of writing, according to the UNOS, there are 112,624 people needing a life saving organ transplant. There were 39,717 transplants last year of which kidneys were the most common, by a considerable margin.

Moving organs is complex, says Dr Scalea, and the issues are similar around the world. Organs are available at short notice and need to be matched and then moved as quickly as possible. “The longer it takes, the less likely it is that we can do a successful transplant.” And the more hours an organ spends on ice, the fewer years for the transplant recipient. In the US alone, more than 3500 organs, constituting “life saving opportunities”, are lost each year due to logistical challenges, he says. 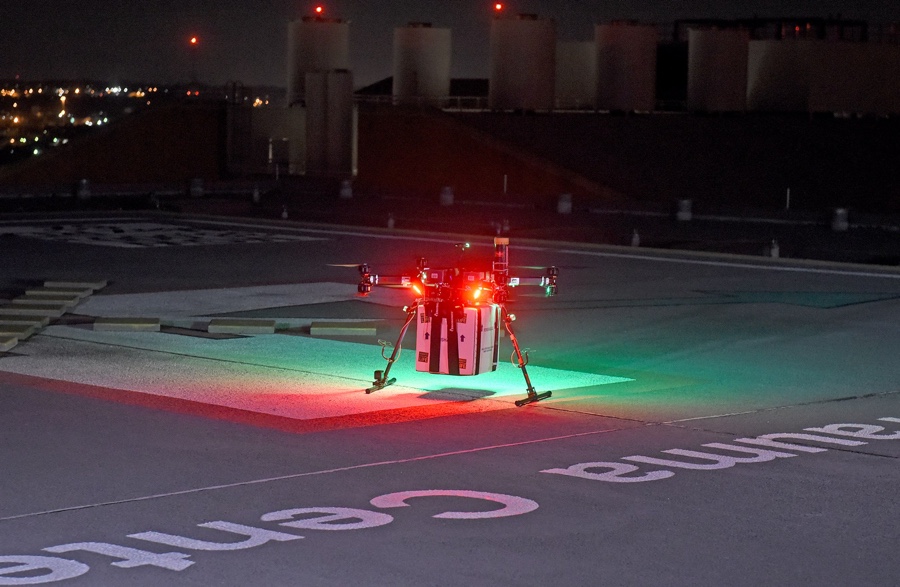 Moreover, there is a lack of transparency around the supply chains. From the time an organ enters a box to the time it comes out, there is often no way to tell where it is. “I can do better with Uber or if I order a swing for my back yard,” says Dr Scalea. He gives the example of a kidney that recently took 29 hours to reach Baltimore from Alabama (780 miles) – he could have driven there and back to collect it in less time, he points out.

The problem is getting worse and there is also a cost implication. The difference between an imported organ and one that is procured locally is on average around $50,000. Charter flights are too expensive, commercial aircraft are too slow and small aircraft at inconvenient hours are dangerous for transplant teams.

UAVs have come on markedly in the last five years, says Dr Scalea. They can spend up to 13 days in the air without refueling and can travel at 200+ mph. There are plenty of companies, from Uber to specialist start-ups such as Blade, looking to commercialise their use.

In a medical context, there is work in Europe to look at the potential for using them to move defibrillators. A simulated study in Sweden found that on average drones carrying a defibrillator could arrive 16 minutes quicker than the emergency services.

When Dr Scalea first raised the idea of drones, he says, the reaction was that he was crazy, that the organ boxes were too big, that it was too hard and too expensive. Despite this, with a small grant, in 2018, an off-the-shelf drone from DJI was purchased. Across 14 test flights, the team monitored all of the data points that were deemed relevant to the recipient, such as atmospheric pressure and vibrations, comparing these with a plane flight.

As the results started to become known, so interest increased and more than $2 million was raised via grants and private funding in a few weeks to take the work forward. This brought together kidney doctors, surgeons, the emergency services, drone engineers and others to devise a system and device. In total, over 100 people were involved. 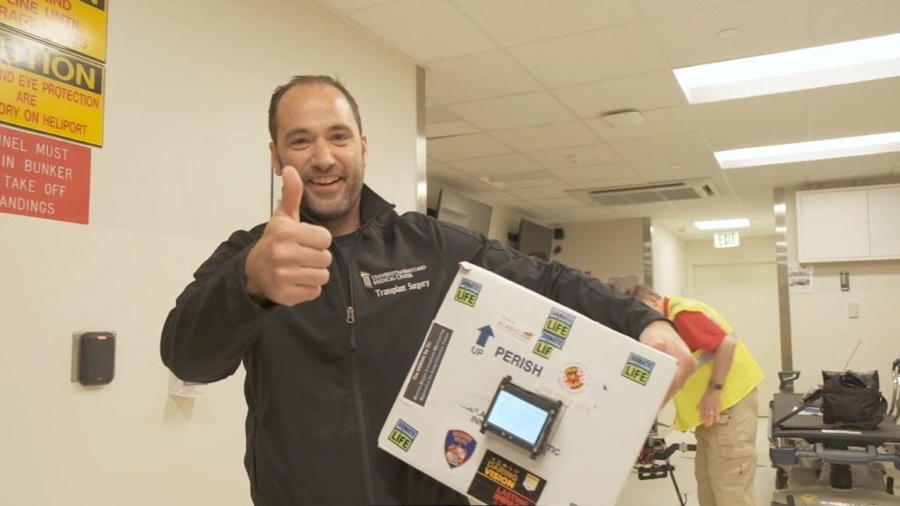 A customised UAV was built and there were 47 test shipments ahead of the first live organ transplant UAV flight in the world. The recipient was 44 year-old Baltimore resident, Trina Glipsy, who had spent eight years on dialysis. Her new kidney was tracked in real-time, with monitoring of its location, temperature, and environmental factors, using a system built by the team. “The patient is doing great,” says Dr Scalea.

That first flight received a huge amount of media coverage, which was always the intention, says Dr Scalea. There is now the need to do clinical trials while building an infrastructure to support the scaling up, with partners needed for this. One of these is Alaris, a US specialist in manned and unmanned aviation. The US aviation authority, the FAA, has been supportive, he adds.

The monitoring system that was built for the first flight will be rolled out, to be supported by an app-based communication system for surgeons, hospital staff, lab personnel and others. This is part of the proposition of MissionGO. Dr Scalea is one of the co-founders of the company, alongside Anthony Pucciarealla, a retired US Navy Commander who co-founded Alaris, and developer and investor, Scott Plank. The latter, in 2006, had invested in Transplant Connect, a provider of human biologics (organ, tissue, eye, placenta and other) donation and transplantation software.

Dr Scalea estimates that drone delivery could cut the time organs spend in transit by 70 percent. “These are a small number of incredibly valuable shipments that will allow us to have an incredible impact on the lives of many.” With discussions under way with the UK’s NHS and many other health organisations, that impact could be worldwide.
By Martin Whybrow|2020-02-14T15:23:49+01:00Feb 14th, 2020|Society|0 Comments