Food waste range hits the supermarket shelves in the Netherlands

An initial 18 Dutch companies that have products derived from food waste have launched their own range. Called ‘Verspilling is Verrukkelijk’ (Waste is Delicious), it has started on a first aisle within the Jumbo supermarket in Wageningen and has three other supermarkets lined up to follow.

“We all meet quite a bit because we are in the same field and at the same events and we noticed that everyone was doing kind of the same thing,” says Chantal Engelen, co-founder at one of the partners, Kromkommer. This company makes soups from vegetables that would otherwise have gone to waste because of their shape, look or over-supply. Its products are in around 100 stores although the majority of its sales are in the food services sector, for company, school, university and other restaurants. That marks good progress since the company was founded in 2013 and last year it broke even. However, the challenge for entrepreneurs is sales, says Chantal, so it was felt there was a lot that could be done collectively. 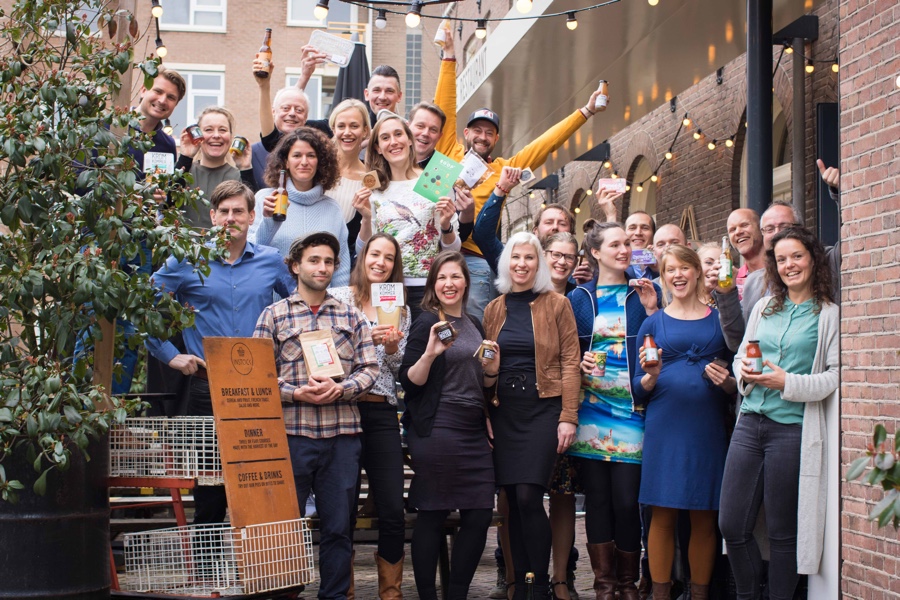 The food waste entrepreneurs at the launch of the venture

The first supermarket to sign up for the range is part of the Netherlands’ second largest chain but, as with many in the country, it is run on a franchise basis. The franchise holders have the flexibility to choose what they put on five per cent of their shelf space. The franchise holder of the store in Wageningen was already interested in food waste and has a partnership with the town’s large agricultural university whereby students can test food waste products via a ‘Living Lab’ initiative. He was an obvious partner for the new range.

There is competition within the group. For instance, “there are three soup brands so you could say that we are in competition, we are competing for the same soup pan at the end”, says Chantal. However, it was felt that the market was big enough for everyone and, ultimately, all the members have the same goal, to raise awareness of and reduce food waste.

She expects other entrepreneurs to follow and there have already been approaches, so too other supermarket stores. Waste is Delicious gift boxes are planned (there is a strong tradition at Christmas in the Netherlands of company owners providing typically food gift boxes to their employees) so too sales of the range to company restaurants. For the latter, there are already some that stock multiple food waste products, such as Dutch bank, Rabobank, but the group is seeking a wholesaler to provide a one-stop shop for the restaurant trade because, says Chantal, it is not likely that a restaurant will want to deal with 18 separate suppliers. 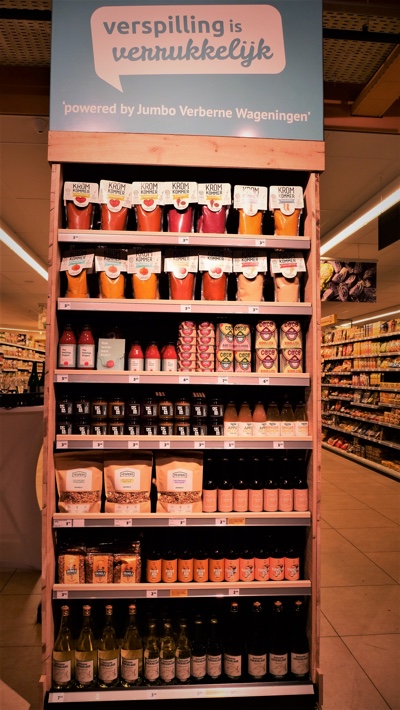 InStock, which came out of the Albert Heijn stores, already has its own restaurants plus its own products – https://smartercommunities.media/waste-table-instocks-dutch-mission/ – but the aim is to sell the range to third-party establishments.

At Kromkommer, it saved 60,000 kilos of vegetables last year, which was the equivalent of 400,000 bowls of soup. The current soups are not organic, because it is taking waste from multiple growers, but an organic line is planned for this year plus initial non-soup products.

The overall ethos of the Waste is Delicious range is that, by joining forces, the entrepreneurs can reach a much wider audience than they could individually. The fact that there are 18 (and counting) such companies in the Netherlands is impressive enough but the likelihood is that, through strength in numbers, their growth and the route to market for newcomers will be made easier.
By Martin Whybrow|2018-03-27T15:18:44+01:00Mar 27th, 2018|Society|0 Comments