Honolulu: On the front-line of climate change

In many ways, islands are on the front-line of climate change. We spoke to the Chief Resilience Officer of Honolulu, Josh Stanbro, about the priorities for his city and for Hawaii as a whole.

Honolulu was in the third and final tranche of cities to be accepted into the Rockefeller Foundation’s 100 Resilient Cities (100RCs) programme. But although these are relatively early days, with the resilience plan still a work in progress, there was already strong commitment and actions under way, as befits a community that is so remote and vulnerable to the elements.

The Structure for Resilience

Honolulu was selected for 100RCs in May 2016 and five months later voters in the city went to the polls to decide on a number of changes to the city’s charter. One of these was to establish an office of Climate Change, Sustainability and Resiliency. While the Rockefeller funding and support is for two years, the proposal was to create a permanent office, with a Chief Resilience Officer (CRO), thereby guaranteeing a solid foundation for the future. The charter change was passed by a 17-point margin showing strong community support for the efforts.

No other 100RCs city has created a structure such as this and it addresses one of the issues that is arising about the initiative, namely the actual resilience of the CROs and the projects beyond the end of the Rockefeller Foundation support.

Josh Stanbro, who was appointed CRO for Honolulu in May 2017, says: “Obviously, for 100RCs, it signaled that Honolulu is in this for the long-run and it provided wind in our sails right away, as we were pushing off from the dock.”

Stanbro took up the dual role of CRO and executive director of the new office, with the latter building towards a staff of seven. He has a strong background within environmental projects on the islands including, from 2009 to taking up the new position, environment and sustainability manager at the Hawaii Community Foundation. 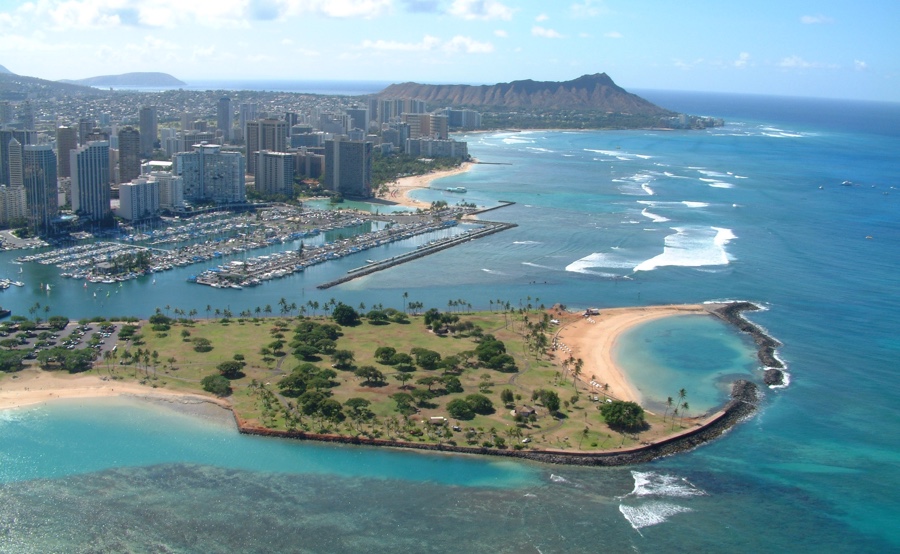 As arguably one of the most vulnerable cities in the world, Honolulu’s acceptance into 100RCs and the support and knowledge sharing that it brings was welcomed but Stanbro believes Honolulu is also well positioned to be a contributor to the network. He feels it can also act as a bridge between east and west – “we have a foot in two worlds” – and can link with other Pacific islands on resilience.

For more information on 100RCs, read our interview with the initiative’s Lina Liakou, former CRO of Thessaloniki in Greece: https://smartercommunities.media/can-cities-resilience-plans-resilient/

In many ways, the support of Honolulu residents for the investment, time and resources to tackle climate change is not a surprise. “Probably this is the leading challenge for island communities across the globe,” says Stanbro. “We spend a lot of time in the ocean, out of doors, we have strong ties to the land, so we have seen over the last decade that changes are afoot. The population knows viscerally that things are shifting around them.”

Hawaii was quick to join other states in its vocal support of the Paris Climate agreement as soon as President Trump announced the US was leaving. “Within four days, all four mayors and the governor of Hawaii pledged that every jurisdiction in Hawaii was committed to staying in the agreement.” It became the first US state to adopt legislation to officially commit to this. 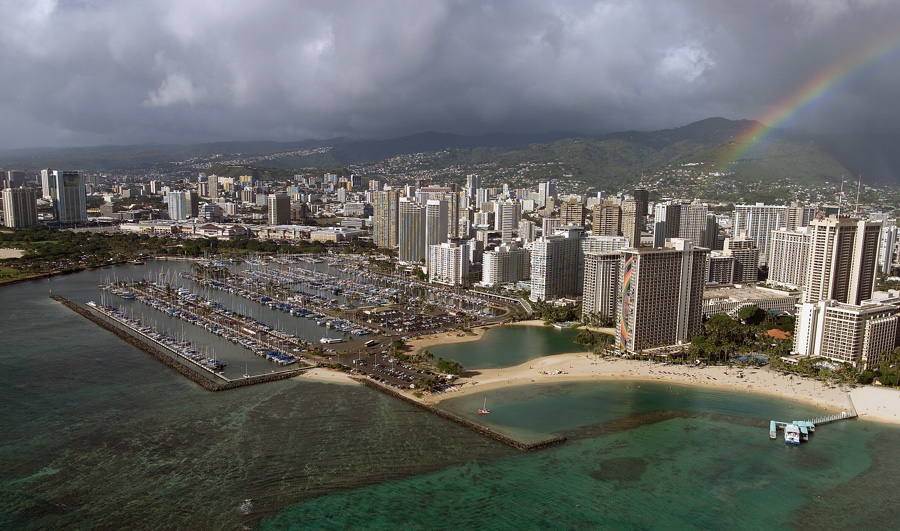 In the last six months in Honolulu there have been over 200 public presentations and input and surveys from more than 2000 people. And there was clear direction in terms of the top priorities.

“Storm vulnerability is keeping people awake at night,” says Stanbro. Hurricane Maria, which caused such devastation to Puerto Rico, was a real wake-up call, he says. So too the fact that in 2015, there were 15 named storms in the Pacific which, through sheer luck, all missed Hawaii. Bigger and more frequent storms, associated with climate change, focus minds on resilience, he says.

Another impact of climate change is reduced rainfall on the islands, so water supply is a pressing issue. Sea level rises are also a major concern, given that 80 per cent of the population lives in the shoreline area. An independent study, predicting a 3.2 foot sea level rise, has shown the impact and has led to the creation of a Sea Level Rise Exposure Area, with work under way related to storm water, drainage and roads.

That Exposure Area is being brought to life in April when, alongside the Blue Planet Foundation, island communities will chalk ‘blue lines’ that mark areas across the state that will be impacted by a one-metre rise in sea level.

Reefs are a natural barrier to storms and are also an important part of the islands’ economy, so sea level temperature increases and acidification are concerns. Reefs are probably under-valued natural assets, says Stanbro, and the islands have already experienced bleaching episodes. While the city’s jurisdiction ends at the shoreline, the state is looking at how the reefs can be protected and is experimenting with more robust forms of coral that might be encouraged to aid the resilience of the reefs.

Proactive responses such as this are not only important per se but there is also, Stanboro points out, the possibility that they might impact the credit ratings of a city, region or nation, with Moody’s stating that it is starting to consider such factors.

Also highlighted from the public engagement in Honolulu is social inequality. The city has the highest per capita homelessness rate of any US state and some public parks have seen ‘tent cities’ spring up as a result. “It is the visible manifestation of the cost of living and the cost of housing,” says Stanbro.

While other states, particularly on the US west coast, have seen double-digit percentage increases in homelessness in the last year, at least in Hawaii it has plateaued, he says. While more work is needed, he admits, “there has been a pretty aggressive housing first policy and we are back into the business of building affordable homes”. 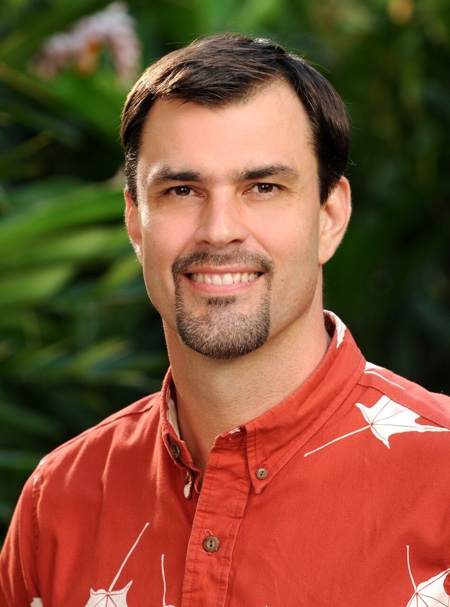 “Hawaii as a state, as a cluster of islands, has been tackling some of these issues long before the office and Rockefeller came on the scene,” says Stanbro. Moreover, with the new impetus and resources, it is not waiting for the full resilience plan to be published (scheduled for the first quarter of 2019) to tackle some “low-hanging fruit”.

At present, around 27 per cent of the islands’ energy is renewable, albeit with variances. The most populous island, O’ahu, of which Honolulu is the capital, is lagging a bit behind at 21 per cent in part due to having the greatest demand. The contribution from renewables has been steadily increasing and the legal commitment provides a definitive target and business case for further investment.


Much of the renewables to date come from wind and geothermal but the islands are in catch-up mode for solar, with work under way with Tesla and some other companies to now combine battery back-up with a big push for photovoltaic.

Another technology that is being pioneered is seawater air conditioning, which would see cool, deep seawater pumped up and through the Honolulu downtown area. The project is at the planning stage, with a decision shortly on the number of buildings to be included. In fact, some work was done in this area in Hawaii in the 1970s in reaction to the oil embargo but the latest plans would be on a much bigger scale and, at least in the US, would be “pretty trail-blazing”.

Trials of electric buses have started in the last month or so. “We are putting them through their paces on different routes” including steep ones, of which there are plenty in the interior of these volcanic islands, and much flatter ones around the coastline.

Even before the climate change office was created, there was a project to convert all streetlights to LED, with this due for completion in the next two years, which will reduce streetlight energy consumption by 60 per cent and will reduce carbon emissions by 15,000 tonnes per annum. And a project to retrofit city-owned rental properties in Honolulu started earlier this year.

The islands’ remoteness is also a challenge for waste management. At present, the bulk of the waste is disposed of through ‘waste-to-energy’ facilities – in other words, large incinerators – which Stanbro admits isn’t ideal but means little goes to landfill.

Currently, more or less all waste for recycling is exported to China, which is clearly a huge distance, with cost and environmental implications. The real goal is no landfill and recycling on-island as much as possible, says Stanbro. The limitations being imposed by China on what materials it takes add to the urgency.

As part of the evaluation, fundamentally there is the question: “If we can’t recycle it on-island, should we allow it on-island?” In mid-2015, Hawaii became the first US state to ban the provision of plastic bags by grocery stores. Subsequent laws have strengthened the ban and by 2020 all plastic bags will be banned except those for produce and restaurant takeaways.

As other islands have found, such as the Isles of Scilly in the UK – https://smartercommunities.media/small-islands-big-ambitions/ – isolation can be a challenge but also a benefit. They make interesting ‘living labs’ that can attract companies such as Tesla in Hawaii and Hitachi in the Isles of Scilly to launch self-contained pilots for new technologies and solutions, with a view to scaling up elsewhere if successful.

For renewables, for instance, there can be no ‘fudging’ of Hawaii’s efforts by importing renewable energy from outside on a credit system because it generates all of its own energy. Stanbro says: “The grid that we have, is the grid that we have, we can’t buy renewables with credits. Islands can be incubators, we have closed ecosystems and we are open for business to innovators.”

Hawaii has attracted the likes of Elemental Accelerator, which provides funding for 15-20 companies in energy, water, agriculture and transportation per year. One of its portfolio companies, Amber Kinetics, is working with Hawaii Electric on energy storage, with the first unit to go live in the US unveiled last month and seen as a potential way to stabilise the grid and store renewable energy. Elemental Accelerator is also a sponsor at this year’s annual Asia Pacific Clean Energy Summit in Honolulu in June.

There are also discussions, related to recycling, with Closed Loop Fund, which invests in sustainable consumer goods, advanced recycling technologies and the development of the circular economy. It has more than $100 million from the largest US consumer goods companies including Walmart, Coca-Cola, PepsiCo, Johnson & Johnson, Procter & Gamble, Unilever, 3M, Kimberly-Clark, PEMSEA, Dow Chemical and Goldman Sachs.

In conclusion, Stanbro points out that the nature of resilience often means there is a focus on vulnerabilities and weaknesses. However, it is also important to identify strengths so that these can be protected and built on.

For Hawaii, a key strength which came across in the community engagement is “the sense of community, the cohesion, island values, it is a big bonding agent for folk”. And, after all, real resilience, he points out, comes from networks, community support and bonds. “The chain is only as strong as the weakest link.”