Climate change-related migration, whether within a country or across borders, will become an increasing phenomenon. Just how many people will need to move remains an open question, albeit one that is being increasingly addressed as a matter of urgency, such as within recent modeling of anticipated internal climate migration by the World Bank (https://smartercommunities.media/world-bank-warns-of-mass-internal-climate-migration-threat/).

Much of the migration will be – indeed, is – unmanaged but there are also initial managed moves, bringing early lessons and, perhaps, a framework for this approach. In Fiji, for instance, one village has already been relocated, with another 30 or 40 on the waiting list and with relocation guidelines being drawn up. In the US, there is a managed retreat from parts of Louisiana, starting with a $48 million relocation of 36 households from the Isle de Jean Charles.

The latter is actually the third attempt at a relocation programme but a new site has been located, through agreement with the community, and construction is due to start by 2022. “People are doing this all over the world but this is the first example in the US of a nationally subsidised climate migration,” says Dakota Fisher, resilience program analyst in the State of Louisiana’s office of community development. Not that, in this staunch Republican deep south state, the words ‘climate change’ necessarily feature in community communications.

In fact, the roots of the initiative were laid down during Barack Obama’s administration, when Louisiana was one of 13 winners for support and funding within a 2014 National Disaster Resilience competition. Its winning bid was focused on six parishes in South Louisiana that were particularly hit by Hurricane Isaac in 2012.

Around 46 per cent of North America’s water drains through the state, primarily by feeding into the Mississippi and from here into the sea. Even if climate change isn’t overtly blamed, residents have seen the changes during their lifetimes. Land loss, rising sea levels, increased flooding, higher risk storm surges and sinking land are starkly obvious, much of it since the 1960s.

There are restoration projects, says Rachelle Thomason of the philanthropic Foundation of Louisiana, but land is being lost faster than it can be won back.

There are two distinct projects, although they are linked. The wider one encapsulates ten schemes across the six parishes. There were five rounds of public engagement, initially through 71 community events, which collected priorities and ideas from residents. Each parish came up with a top six and, on the basis that not all of these could be financed, they were further prioritised by the communities.

The public polling was one of six criteria for selection and, says Fisher, each parish had its first or, at least, second choice projects chosen.

There have been a lot of development issues, says Jeannette Dubinin, coastal program director at the Baton Rouge-based Center for Planning Excellence. There is a lot of run-off from commercial developments, which has become worse with increased rainfall. “Residential development has been pretty awful too,” she says. “There has been a quest for increased density while still trying to fulfill the American dream of everyone owning a home.” Storm water from these developments tends to be channeled into ponds and creeks, which really isn’t working any more, she says.

Also not working is the policy of pumping out water from inside the levees. The soils in Louisiana tend to be very organic and they shrink through repeated pumping, which has caused pronounced subsidence, often to below sea level.

In Spring, flooded roads are common and, as in so much of the US, cars dominate, with no consideration for other forms of transport, which – ironically, Dubinin points out – is further contributing to climate change.

Within the projects are ones to reclaim the streets to allow residents to choose any form of travel, including walking and cycling, and with layouts that accommodate these. There is also a philosophy of “Make Space for Water” that envisages opening up communities to water, not hiding it away behind walls, which if done well will increase the quality of living and provide attractive waterfronts for new developments.

An Urban Water Plan Project for integrated water management has drawn on Dutch expertise and includes a wide range of measures, including nature-based ‘blue-green’ ones, from individual water gardens to bioswales (sloping landscape elements to concentrate or remove debris and pollution from surface runoff water), water storage in public parks, permeable parking lots, and optimised drainage so that pumping will be done only when absolutely necessary. 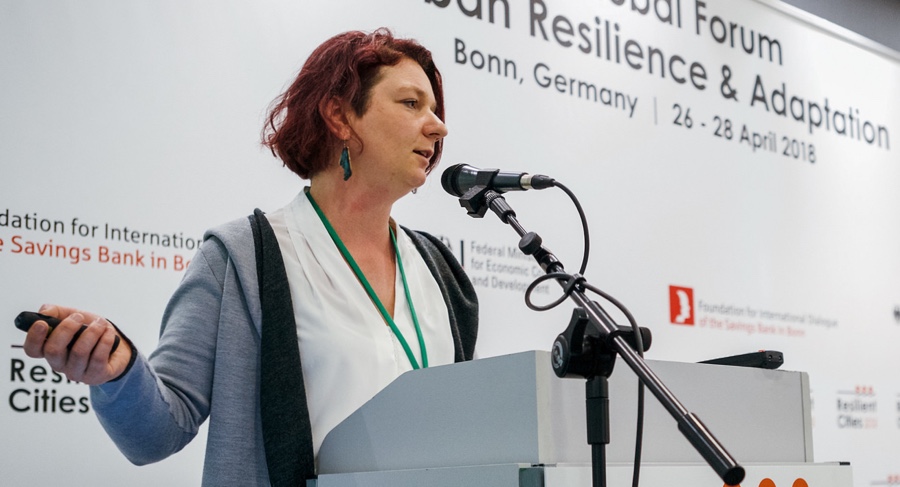 In one parish, a school abandoned to flooding is being turned into an environmental education, cultural and business centre, with wetlands created around it and pathways out into this from the centre. In the same parish, a harbour and seafood market are planned, based on community requests for a safe haven from storms. For new developments, the vision is that these should not be too dense, should retain as much woodland as possible, and will have a lot of blue-green spaces.

There is clearly synergy between these projects and the relocation one. “In the last couple of years, we have identified that unfortunately there are pieces of coast that may not be viable in the future,” says Fisher.

Particularly on the frontline is the community of the Isle de Jean Charles. Here, since the 1960s, the surrounding wetlands have become sea, with around 98 per cent of the land mass now gone, and there is ever more flooding of the single causeway that links it to the rest of the state, regularly blocking access to schools, work and health services. There has been a dramatic reduction in the population in the last century and, although for those families that remain, most of which are impoverished, relocation isn’t an attractive proposition, it is probably the only option, he says.

A previous relocation scheme failed, headed by the US Army Corp Engineers, as it required 100 per cent buy-in from residents, which wasn’t forthcoming. That is not a requirement this time round.

In the second half of 2016, an outreach needs assessment started, which literally involved walking the island multiple times and sitting down with families, and hearing their stories (many are from one of two tribes). The information was then presented at community meetings. A second phase established a team to identify suitable relocation sites of between 300 and 1000 acres, where there was no future flood projection.

Six configurations were taken back to the community and there were two site visits, followed by a survey to gauge preferences. In the last couple of months, a $11.7 million purchase agreement has been finalised for a 515-acre site in Terrebonne Parish near Schriever.

Planning is again a community effort, with a steering committee with representatives from each island community group. There are a lot of differing opinions but most weight is given to those from people who live on the island (as opposed to those who previously moved away but might now locate to the new settlement). The new homes should be low energy, with solar panels and insulation, which should help to keep down bills and ensure they are affordable.

Not everyone is likely to move to the new site, says Fisher, and there are cultural and social challenges, including those associated with moving from the coast to inland, as well as the need to plan services, transport, education and employment provision. “The ones left behind are the ones least able to move and they have usually bigger problems.” Indeed, it transpired that the initial engagement phase was perhaps more suited to a therapist than a planner, he says, such was the diversity of issues raised. While the community includes the two tribes, there are non-tribal residents as well, he adds.

The residents are mostly unlikely to be able to afford insurance. Louisiana has the most repetitive flood loss properties of anywhere in the US, with this standing at 26 times the average in the six parishes and 268 times in one of these. For those in the federal National Insurance Flood Program (NFIP), lots of dollars have been paid out to allow people to rebuild their homes in the same way, on the same spot. “It doesn’t matter how high your country’s GDP, that’s not sustainable,” Fisher observes.

At face value, $48 million to move 36 households makes no sense, admits Fisher, and a much more affordable model is needed, but this project was not only about the immediate relocation. “It is supposed to be a model for how the state, nation and, perhaps, the world can move ahead with relocation,” he says.
Main image credit: US Geological Survey
By Martin Whybrow|2018-05-08T08:28:49+01:00May 8th, 2018|Environment|0 Comments