The province of Treviso in northern Italy has recycling rates that most other communities can only dream about. Yet there is nothing unique about the region as a whole. So how has it become so good at recycling and how will it achieve its ambition of zero waste by 2022?

By virtue of achieving recycling rates of 85 per cent for all residential and small-to-medium sized trade waste, the Treviso province in northern Italy is way ahead of much of the rest of the world. It has achieved this through a lot of hard work, strong political will and sustained communication and training with its citizens.

Indeed, there is no reason why these sorts of rates couldn’t be within reach of many other communities because the Treviso province has the same sort of rural and urban mix as elsewhere. But while others play catch-up, Treviso is seeking to kick on, with a stated aim of zero waste (at least 96.7 per cent recycling) by 2022, largely expected to be achieved by now tackling the individual elements that still make up its residual waste.

The company behind this excellent story is Contarina spa. It is owned by a consortium, Consiglio di Bacino Priula, that represents the 50 municipalities within the province of Treviso, in the Veneto region. It is an area of approximately 1300 square kilometres with about 554,000 inhabitants. The province includes large rural areas, small and medium-sized communities and the city of Treviso, which has over 80,000 inhabitants, of which around 3000 live in the compact historic centre.

All decisions are taken by the mayors of the municipalities, including setting charges, and these are then acted on by Contarina. “It is important to underline that all of the services for the 50 municipalities have the same model,” says Marco Mattiello, International Relations Manager at the company. “Having the consortium that gives direction to the waste management company is absolutely important. Having a long-term goal gives us the chance to create the budget for the next years in a certain way, for new techniques and plants, for instance. Long-term budgeting is essential.”

One initial factor that drove the push for recycling was the fact that there are no incinerators (or ‘waste-to-energy plants’, as they are now often referred to after a marketing makeover) nor landfill sites in the province. Around 20 years ago there was an idea to build an incinerator but it was rejected by the mayors. So from the start, there was a financial incentive to recycle as much as possible and no need to produce a large amount of waste to feed an incinerator.

“When I do presentations and people look at me as if I am an alien, I have to explain that 20 years ago we were at 20 per cent recycling rates,” says Mattiello. Contarina started with four municipalities. “Then others asked to join because they noticed the results were very good.”

The City of Treviso signed in 2013, with collections starting the following year. Its recycling rates went from 52 per cent to 85 per cent in one year, with more frequent and flexible door-to-door collections and variable (‘Pay as You Throw’) fees. This in turn created 26 new jobs in waste collection but the total cost of management and disposal stayed the same, while the charges for residents were reduced.

Contarina as a whole now has 700 staff, of which around 500 are operators, so are out every day on the streets of the province. It also brought additional green jobs, such as through the creation of ‘ecocentre’ waste sites, of which there are now 42. These are owned by Contarina but the staff are from social cooperatives. “We don’t have the exact number of jobs created through handling waste but it is very important numbers, of course, because we work with a lot of companies for different types of materials,” says Mattiello.

Treviso’s current recycling rate of 85.6 per cent compares with the Italian average of 47.5 per cent. Its 58kg of annual residual waste per inhabitant (of which 43kg is from door-to-door collection and 15kg is bulky waste taken to the ecocentres) compares with 490kg on average in Italy. And, Mattiello points out, in Europe, Italy is far from the worst, with much lower recycling rates in countries such as Denmark which have a lot of waste going to incinerators.

Contarina now provides consulting services for other regions in Italy, including at present for a client near Bologna and another in the Italian Alps region. Requests also come from further afield and it is doing work in western Europe, Ukraine and Africa.

“We think that investing in techniques and recycling plans is absolutely important but, at the same time, we believe that investing in the citizens is best,” says Mattiello. Contarina has a lot of people working on this, to create individual awareness.

Twice a year, it publishes its own magazine, which is distributed to all residents. It has a branch office in more or less every municipality. It has 25 different training modules for schools, from six to 18 year-olds. It also makes extensive use of social media, including an app for reporting litter. And twice a year it opens its head office and recycling plants so that people can see what happens to their waste after it is collected. On a sunny day last September, for instance, more than 1000 families visited. Some communications have been produced in languages other than Italian for non-native speakers. 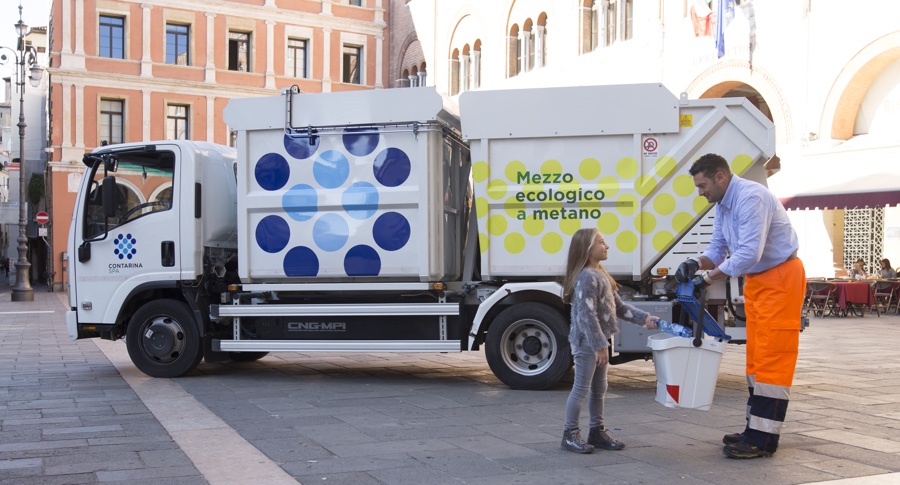 The ecobus in the city centre of Treviso

Contarina also uses the aforementioned variable charging. Based on the number of people in a household, there is a 60 per cent fixed fee and 40 per cent variable fee. The latter is based on the volume of residual waste, with this automatically read on collection. There is a 30 per cent reduction for people who compost at home and fixed prices for garden waste. “It is the polluter pays principle,” says Mattiello. “We believe in putting individual responsibility at the centre of our model.”

The recycling rates mean that the system works out extremely cost-efficient for both Contarina, which has less than half the management costs per user of the rest of the country, and the customers, with the average household fee for its residents coming in at less than anywhere else in Italy. 95 per cent of collections are residential but it also collects from small businesses such as bars and restaurants.

Its bins comprise ones for residual, organic, green, paper and glass, cans and plastic waste. Clearly, the bins and frequency of collections need to vary depending on the community. In the old part of the city, Contarina responded to complaints from residents about the number of bins in the streets by trialing a new model a few years ago which it has now adopted. There is now an ‘ecobus’, of which there are four. They run on six set routes and spend half an hour at each stop, so along the lines of a passenger bus, collecting two different types of waste at a time, which residents can bring to the vehicles. The schedules are published and include evening and weekend routes, to fit with people’s work patterns.

Complementing the ecobus in the centre of the city are now ‘ecostops’, portable containers taking four types of waste, with two routes and one hour stops at fixed places, again with residents taking their waste to the facilities.

In 2013, the 50 mayors signed a Memorandum of Understanding for the ambitious goal of effectively zero waste (at least 96.7 per cent recycled) and 10kg of residual waste per person per year.

Demonstrating how it intends to achieve this, in the last month it has initiated a scheme with Fater, an Italian subsidiary of Procter & Gamble, to recycle absorbent hygiene products. These make up 28 per cent of the non-bulky residual waste (alongside 30 per cent plastic, ten per cent paper and cellulose, 15 per cent textiles, less than one per cent organic, and 15 per cent other materials).

The collection and separation methods for this have still to be decided. Residual waste is collected every two weeks from households and the new plant is being tested to see how it handled materials that have been collected over this length of time. The items could be collected directly or using a bag that is put into bins and then optically separated.

Whatever the ultimate solution, this approach of tackling the individual residual waste items shows how Contarina aims to reach its 2022 target. It is looking at partnerships with other companies that are interested in developing business models for additional residual waste materials.

For bulky items, again it is partly tackling these on a case-by-case basis. For matrasses, for instance, it is in discussions about a project with a local cooperative. The technology is there to recycle them but it has been too expensive to-date. It is trying to head off other items from the ecocentres such as furniture through NGOs for reuse, repair and resale. Electrical goods are all recycled via the ecocentres although, reflecting their value, there have been problems of late with thefts from the centres.

It is clear that Contarina and the municipalities that direct it are not resting at their current rates. There is innovation at each step, from the ecobus and ecostop, to the variable fees and the latest facility for recycling hygiene products, backed up by perseverance, partnerships and a lot of emphasis on communications. This combination explains why it is such a leader and has a lot of lessons for how others could follow.