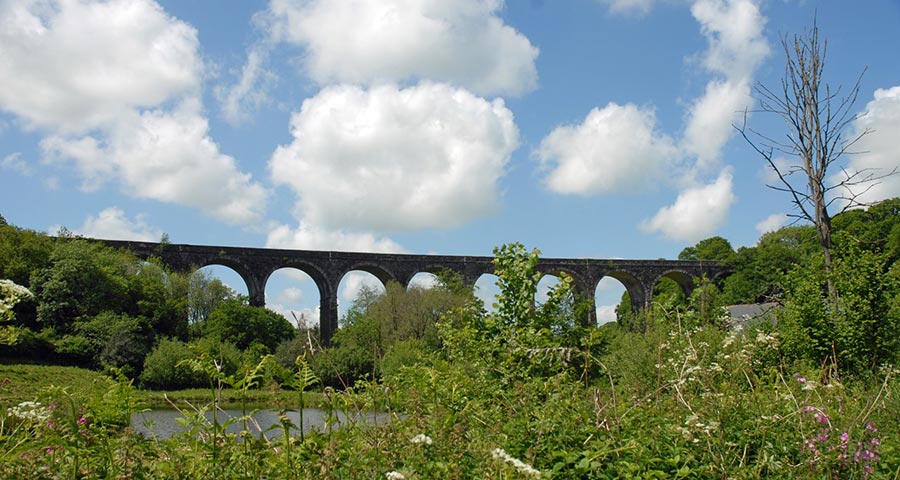 The 13 arch granite viaduct at Shillamill

It is some way off, but might a new line on an old trackbed come to serve the expanding town of Tavistock in Devon? And could this be a blueprint for other such schemes?

There is no doubt that the rail cuts in the 1960s in the UK are regretted today across the country. Lines that were deemed unprofitable were closed as a result of the Beeching Plan of 1963 but so many of these would, today, be well used and contributing to reduced road congestion if only the politicians of the time had had the foresight.

However, in Devon, there are moves afoot to open a new line. This is centred on the ancient market town of Tavistock. It was served by two railway lines from Plymouth, the result of inter-company rivalry. The former Great Western railway line closed at the end of 1962 and it was anticipated that the former Southern Railway route would remain with a service linking Plymouth and Okehampton via Tavistock. However, somewhat unexpectedly and despite protestation from many – and in particular Devon County Council – this service was axed in 1968 leaving Tavistock with no rail service at all.

In common with other towns Tavistock has expanded over the years with new residential development and it is also an increasingly important centre for tourism. The most important link for the town is with the city of Plymouth, some 15 miles to the South, with hospitals, shopping centres, a university and employment.

In the absence of a railway, the link is provided by the A386 road. Like the A281 in Surrey (see below), this is less than adequate, particularly at peak times and journey times are consequently extended. To upgrade this road would be extremely costly, environmentally intrusive and complicated by the fact that it runs along the edge of the Dartmoor National Park.

Kilbride Rail is a specialist transport infrastructure and property development company focusing on the rail sector and has been involved in projects providing capacity for Jaguar/Land Rover at Castle Bromwich and Halewood Honda at Swindon BMW at Cowley and for Safeway Stores in Scotland.

Part of the former line was retained to operate between Plymouth and Gunnislake, in Cornwall, via Bere Alston as it was acknowledged that closure of this line would bring result in very significant hardship for the residents off Calstock and Gunnislake as adequate road transport was difficult to provide in view of the very limited number of crossings over the River Tamar. Tantalisingly – and rather irrationally – this left the line truncated at the small town of Bere Alston, just six miles south of Tavistock.

Having fought the closure in the 1960s, Devon County Council, with commendable foresight, safeguarded the trackbed in the hope that the line could, one day, be re-instated.

It was felt that Kilbride Rail’s rail activities could be diversified to bring the same expertise and approach to the provision of passenger services as it had for the manufacturers. And as the trackbed to Tavistock had been safeguarded, the re-instatement of the service seemed to be, potentially, a productive case in point.

It was quickly ascertained that the County Council, West Devon Borough Council (in whose area Tavistock is located) and the local Town Council were all supportive of the concept. Furthermore – and crucially – the local authority was planning to approve the building of around 750 new homes on the edge of Tavistock. Kilbride recommended that this development could help to fund the railway’s re-instatement.

With the support of Devon County Counci, Kilbride has promoted the Tavistock re-opening project through the local plan process in West Devon. Having signed up the land options and gained an allocation of the land in the local core strategy, Bovis Homes have been brought in by Kilbride to deliver the residential development. Outline planning approval has been granted by the local planning authority, part of which established, through a Section 106 agreement (the UK’s system of developer funding), the fund for the railway re-instatement process.

The process has taken considerably longer than had been hoped at the time that Kilbride first embarked on the planning of the project. This is partly due to the banking crisis of 2009/10 that resulted in a severe and ongoing shortage of capital for building projects and also the need to comply with the complexities of the English planning process before approval for the residential development can be forthcoming.

There are more hurdles to be overcome yet, including the need to update environmental impact studies linked to the re-introduction of trains along the route and the requirement to carry out in-depth engineering surveys of the structures along the route, primarily the 13 arch granite Shillamill viaduct and the adjoining 600 yard long tunnel.

However, it does confirm the fact that, with strong local authority support and a firm commitment through a Section 106 agreement, residential development can be used as financial leverage to bring back services on railways that have closed.

With the scale of new home building in many locations around the country the Tavistock project can be seen as a blueprint for other potential railway re-openings where new demand for transport services is being generated.

A Plymouth to Gunnislake train at Bere Alston. Currently the train reverses here but when the line is re-instated, the train will arrive at this platform and will continue in the same direction for six miles to Tavistock.

The Beeching Plan of 1963 set out to establish a railway network in the UK that would, ideally, be “profitable” but at the very least would stem the increasing losses made by the nationally-owned railway industry. This was to be achieved, on the one hand, by the elimination of un-remunerative lines and intermediate stations and on the other by the development of train services that exploited rail’s advantages of speed, distance and the ability to handle large numbers of passengers and bulk freight.

Closures were not unknown before the arrival of Beeching and for example, pretty well all of the former Midland & Great Northern main line that had linked the Midlands with east coast towns like Great Yarmouth had closed in 1959. In Kent, the branch lines linking Paddock Wood with Hawkhurst and Dunton Green with Westerham had operated for the last time in 1961.

However, the Beeching report represented a step change in service withdrawals recommending the closure of around 2,300 stations (about 55% of the total) and some 5,000 route miles (30% of the total). In the event, not all of the proposals were implemented but the end result was still a significant reduction in the UK’s railway network, with 4,065 route miles being closed between 1963 and 1973 when the closure programme was finally halted.

Putting aside the issue of financial viability and the lack of recognition, in 1963, of the broader societal benefits that rail services bring, there is no doubt that some line closures were justified by, for example, removing duplication. A classic case is the small town of Marlborough in Wiltshire that was served by two parallel railway lines from the nearest main line at Savernake, this peculiarity resulting from competition between two rival companies during the “railway mania” period of the 19th century. In the end, the town lost both services and there is currently a campaign to assess the feasibility of re-instating one of them.

In many cases, although closure may have seemed the optimum solution, based purely on the relationship between cost and revenue, there was little or no consideration given to the role that certain lines and stations could play in the future as the programme was entirely predicated on circumstances that prevailed at the time.

A good example was the railway that ran the 21 miles between Guildford and Horsham. This line had been built primarily as a spoiling tactic at the time of intense inter-company competition and served, in the main, small communities along the route that were better served, later on, by car and bus. The one exception was the town of Cranleigh that had developed significantly following the arrival of the railway. No attempt was made to modernise the operation of the service and inevitably it came under the scrutiny of the Beeching team who recommended its closure. Approval for this was given and the line closed in June 1965 at the same time as approval was given, by another part of the same government, to expand significantly the size of the town.

Today, traffic congestion is a major problem, especially on the inadequate A281 road linking Cranleigh with Guildford and a great deal more residential development is planned (the current plan proposes 8,000 new homes in and around the town) so consideration is being given to the possibility of re-instating the railway line. Whether this actually happens or not remains to be seen but such a venture would be additionally complicated by the fact that, as in so many other cases, the old railway infrastructure was rapidly destroyed as soon as closure had taken place.

About the Author: John Chapman

John Chapman has spent some 40 years in the transport industry including appointments with Eurotunnel and the UK’s Strategic Rail Authority. In parallel he served in the Royal Logistic Corps, Territorial Army for 26 years. Since 2005 he has operated a consultancy specialising in rail and logistics topics and is a volunteer station master on the Kent & East Sussex heritage railway.