Self-build: The eco-friendly labour of love

Everyone who has practised as an architect has the desire to design and build their own house. I decided to undertake this some time during 2002. The first important steps were to find a plot with permission to build a dwelling and deciding on the principles for the design and form of construction.

Finding the right plot is not an easy task and is certainly a personal choice for the self-builder. A large plot in the rural French countryside presented itself, located in a national park. The best description I can provide of the chosen site is that it is akin to ‘a secret garden’. All sites have constraints provided by both the physical environment and by the planning authorities, who ultimately must grant planning permission for the desired development proposals.

Being located within a national park brought additional planning constraints by the means of conditions attached to the Grant of Planning Permission, namely:

After a period of time spent on the site and contemplation of what could be possible, the decision was to build an eco-friendly house, the objectives being: Being eco-friendly brought constraints of its own and of prime importance was orientation. The aim is to make the best possible use of passive solar gain and natural light. Passive solar gain is used to warm the house, so intrinsic to the design is minimising heating. Windows and their position also contribute to natural light penetration of the building, thereby minimising the use of electricity for artificial lighting. The principle of orientation influences the layout and use of the house, which does reflect on the manner in which the house is lived in and also its appearance and design.

Bedrooms are located to the east of the house, thereby benefiting from the morning sun. The south side contains the large main windows which allow natural light into the main living spaces while allowing the sun to penetrate and warm the floor during the cooler months of the year. To the west is an open living, dining and kitchen space, again with a larger window providing light to the area of the house devoted to cooking, living and relaxing as the evening sun descends.

The biggest eco decision was the form of construction and materials. It was decided to use straw bale external walls integrated within a large timber load-bearing frame under which the straw bale envelope would sit. Straw is considered to be a waste material after the seed crop is extracted, it is a natural product which locks in carbon during the growing process. The straw bales were eventually obtained from a field approximately three miles distance which minimised transportation to site. The timber for the frame was obtained from a timber yard approximately two miles from site, the trees having grown locally also locking in carbon.

The subsoil of the site was studied and identified to be sufficiently clay in its content to be used both externally and internally as a render finish to the straw bales. So, the eco decision was made to use earth render to protect and provide a finish to the straw bale walls. Extraction of the clay from the subsoil was hard manual labour, with stones to be removed and the clay graded and sieved to no larger than 10mm in order to be used, with sand, as a render coating.

An important principle of design was a large roof with generous overhanging eaves to protect the external earth rendered straw walls. Large overhangs also provide shading for windows during the summer months when the sun is high and passive solar gain is not required. An important construction sequence is completion of the erection of the main timber frame and roof finish before the straw bales were obtained and the external walls were constructed. At this point a rainwater harvesting system was installed collecting rainfall from the roof for use in mixing all the earth render to be applied to the straw bale walls.

Ultimately, except for the concrete raft foundation, materials used for construction of the building were natural products which could, over time, decay back into the earth leaving little more that the foundations to reveal that a house had at one time existed. This is also true of the clay roof tiles which adhered to a planning condition imposed by the Grant of Permission.

Passive solar gain is provided by the sun penetrating the windows falling on the terracotta floor tiles which are laid on a well-insulated screed. The tiles and screed warm up during the hours of sunlight to give off this heat over the next twelve hour period to keep the house warm. An example of it effectiveness being that on a cold frosty morning the internal house temperature may be at 17°C and, with the sunshine during the day warming the floor, the temperature rises to 21°C, with no other form of energy used to provide heat for the house.

In terms of measurement, this house cannot easily be compared with Passivhaus standards. Suffice to state the straw bale walls do provide insulation values equivalent to Passivhaus. The eco-friendly straw bale house does have natural breathable finishes which are not designed to provide the air tightness required by Passivhaus, which in turn requires mechanical ventilation with heat recovery. However, the house does not use fossil fuel for heating as a wood burning stove provides the heating requirements of the house together with domestic hot water. As illustrated by the passive solar gain example above, the amount of heating for the house can require minimal use of a renewable energy source.

My experience reveals the construction of the straw bale house was very labour intensive, a labour of love over an extended time period. The result being one of pleasure, a comfortable and healthy house to live in, minimising the use of energy while integrating well with the natural environment.

Would I do this again? Probably not. However, I would consider designing and building a straw bale house using a prefabricated system and these are available via a company called Modcell. This prefabricated form of construction is of factory built panels which are delivered to site where they are craned into place, thereby minimising the on-site hard labour, obtaining of individual materials and, in this example, extraction of clay from the site. The Modcell prefabricated system can provide an option to achieve Passivhaus Standards as a recognised measurement of energy efficient buildings. 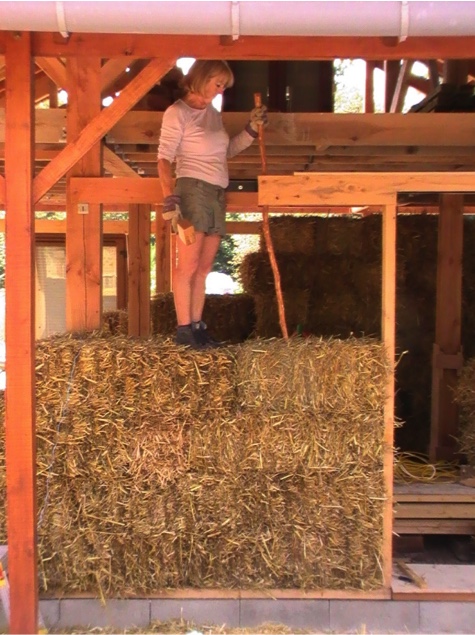 Dennis’ partner, Sue, with the straw bales ready for the walls

As touched on at the beginning, finding a site for self-build is not easy. However, it must be pointed out that you have the ‘Right to Build’. This is a piece of legislation for English authorities that supports aspiring custom and self-builders who want to build their own homes.

Since 1 April 2016, the Right to Build requires local authorities in England to maintain a register of people and groups in their area who want to have a role in an owner-commissioned home, whether that be for custom building, self-building or through community-led housing. People can either sign up as individuals or as groups of people who want to build together.

Councils must ensure they have sufficient ‘shovel-ready’ plots to meet this demand. To do this, they need to give suitable development permission (planning permission or permissions in principle) for these serviced plots. Nevertheless, despite this, Britain lags behind neighbouring countries as reflected in the fact that only 10 per cent of the UK’s new homes are self-builds, compared with more than 50 per cent in some other European countries.