Setting sail for a low-carbon future

There’s nothing like a breath of sea air but just how fresh is it? The often ignored air pollution associated with busy shipping lanes means coastal air quality can be worse than in the centre of congested cities.

Pas de Calais council and Kent County Council have been focusing on the busiest shipping lane in the world, the Straits of Dover/Pas de Calais. After two years of analysis, an action plan was unveiled at an event in Dover this week.

The Passage EU-funded Interreg project is meant to trigger a low carbon transition for the Straits. With 15 per cent of the world’s maritime traffic using this stretch of water, improvements could have a significant global impact. Moreover, there is a predicted 40 per cent increase in cross-channel traffic by 2030. Today, there are 3.3 million heavy goods vehicles (HGVs) crossing the Straits each year.

So what are the conclusions of the study and, crucially, what’s next?

An immediate problem arises. Only 31 per cent of emissions are linked to traffic that uses the main channel ports, with the rest stemming from passing maritime traffic. Shipping is not covered by the Paris climate agreement and there is a lack of regulations related to emissions from ships, including no account of them for national emission targets.

Within the Passage project, the partners will seek ways to reduce the emissions that are within their reach but a lot of emphasis in the action plan is on raising awareness and lobbying national, European and international authorities. There will also be lobbying for a shift of freight from road to rail and waterways (for the latter, the future Seine-Nord Europe Canal is an important part of the jigsaw). 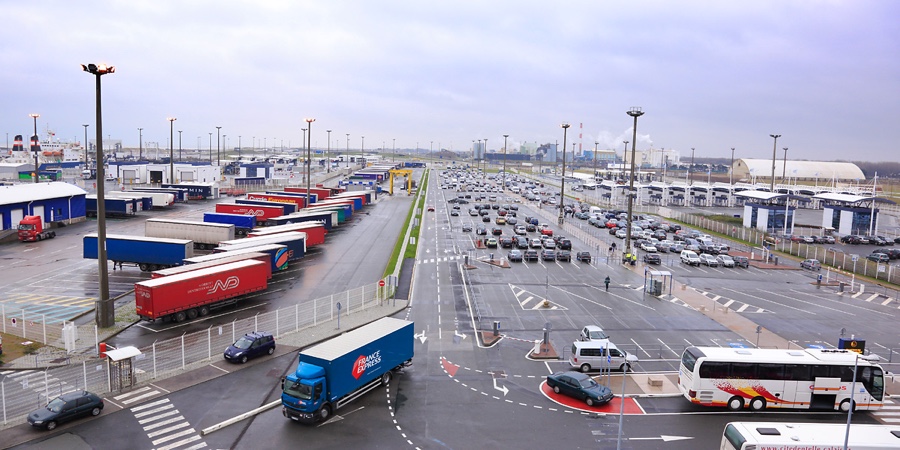 The Port of Calais

In fact, the action plan is surprisingly high-level after two years of effort and input from a lot of stakeholders so for a modal shift to rail, for instance, it is merely stated as a topic for lobbying, with no tangible other actions.

Much of what is proposed is currently at the planning stage. For instance, neither council currently considers the ‘global cost’ within public procurement, taking into account the full lifecycle including carbon costs related to production, transport, usage and end of life. Such an approach would favour low-carbon production processes and one proposal of the Passage action plan is a coordinated approach ‘to study the feasibility and implementation’. In fact, it seems there has already been some analysis in France so the work is hopefully not starting from scratch.

Shortening supply chains looks essential if at least some of the estimated freight increases are to be tackled at source. There will be an ‘exchange of evidence’ and if there is anything to be built on, it looks to be on the French side (a recurring theme), particularly Pas de Calais’ Sustainable Food Strategy. A working group to consider alternative fuels and energy efficiency at the ports is also proposed (Dunkerque, within its Cap 2020 strategy, is particularly looking at alternatives such as Liquid Natural Gas).

Modernising and improving the energy efficiency of fishing fleets is also proposed. The Pas de Calais fleet, for instance, is ageing (more than 27 years-old on average). There is a hybrid fishing boat, La Frégate, in Boulogne-sur-Mer developed by France Peche Durable et Responsible. Pas de Calais’ fishing policy will include criteria for reducing the carbon emissions of fishing fleets and there is a plan to equip one boat here with electric propulsion and storage to show what can be done.

The Port of Dover

There is huge scope to improve the ability to cross the Straits without a car, given how difficult it is today, whether on foot or by bike. Only one ferry company supports foot passengers and it is hard to connect with either port at present. There are additional charges for taking a bike on the ferries and they are the last to load and the last to unload at each end. Then, on arrival, there are no cycle lanes, directions or safe storage areas.

With Eurotunnel, there is no provision for foot passengers and anyone with a bike has to book at least 24 hours in advance, there is a limit of seven people per train, they have to meet nearby (a Holiday Inn on the UK side) and from here they and their bikes are taken separately to the train.

Pas de Calais, in particular, is promoting car-free holidays but the cross-channel obstacles are a severe restriction. Among other things, testing a cross-border bus service through the tunnel from Dover town centre to Calais town centre is suggested. The operator of the Calais and Boulogne-sur-Mer ports, SEPD, is implementing a self-service bike station at both ports this spring and under consideration is a bus connection for the port of Calais.

The Passage document is strangely silent on an Ashford-Calais passenger train shuttle through the tunnel for which there was a detailed study a few years ago, killed off by a change of senior management at Eurotunnel. As a boost to the two regional economies and as a solution to the foot passenger/bike issues to provide a real alternative to the car, it is surely worth another look?

The individual steps by the two main ports to date are somewhat underwhelming compared with many of their counterparts, such as Port of London, Ostend, Gothenburg and Rotterdam.

Speaking at the launch event, Liz Fagg, lead environmental advisor at Port of Dover, highlighted its 50 per cent reduction in carbon emissions since 2007, achieved by tackling areas such as energy efficiency and lighting. However, despite the south-facing location, large roof spaces and wind, it doesn’t currently generate any of its own energy (the Eastern Docks cargo terminal which is under construction should be much more efficient and renewable energy provision is planned, she said).

Moreover, there are currently no initiatives around green tariffs, such as introduced from the start of 2017 by the UK’s second largest port, London Port Authority (LPA), whereby operators are rewarded if they reduce their carbon emissions. The LPA discount is available to ships that exceed international emissions standards set by the International Maritime Organisation (IMO) in a scoring scheme run by the World Ports Climate Initiative. Among the ships qualifying for the discount are car carriers, container ships and tankers. In the first three months after its introduction, 66 ships calling at terminals on the Thames qualified for the discount.

The Port of Dover

‘Cold ironing’ looks particularly promising and would be part of the Passage working group looking at port efficiency. To remain operational in port, a ship burns fuel which is a major contributor to pollution (sulphur, nitrogen, fine particulates). Cold ironing enables ships to use an electric connection to plug into the land grid, with the potential to almost entirely cut emissions.

The Channel Tunnel accounts for around one-quarter of the commercial movements between the UK and the continent and the operator, Eurotunnel, now publishes its annual carbon footprint, with this reduced by 55 per cent since 2006. Its modest ambition is now to reduce carbon emissions by three per cent per year. The Passage document proposes replacement of diesel buses with electric by Eurotunnel.

Synergy with Other Plans

On both sides of the channel there are related, complementary strategies (the Kent Environment Strategy) and, at least on the French side, projects. The Third Industrial Revolution (Rev3) strategy, developed by Pas de Calais (now Hauts de France), is focused on creating a low-carbon economy and new activities and jobs in the region.

There are many small projects across the region related to areas such as retrofitting homes, mobility, supporting local supply chains, recycling and biodiversity. There are separate low-carbon plans in Boulogne, the Two Caps Land district, Desvres-Samer, Calais, Opale Country district, the Audruicq area, Montreuil, St Omer, Lumbres and Dunkerque.

The participants in the Passage initiative have been busy meeting, talking, analysing and proposing working groups. Whether this has value or not will be seen in its next phase, to March 2020, but it looks more like an umbrella for projects that were already in hand and there is a dearth of concrete proposals, perhaps in part due to a lack of budget and resources.

Passage highlights many areas where there is scope for improvement, so what’s next?