The loss of secondary school education can constitute a huge setback for young refugees but a new initiative is seeking to provide a free online and offline diploma programme. What has been the progress to date and what’s planned?

One of the huge disruptors for refugees is education. 78 per cent of school-age refugees don’t complete their secondary school education and only one per cent go on to university or other further education. Seeking to come up with a solution is Sky School, a new initiative that aims to combine online and offline education to provide a fully rounded curriculum that will lead to a globally accredited diploma.

A pilot is underway to test the concepts, technology and logistics and there are plans for a phased roll-out of courses after this, ahead of the launch of a full curriculum offering in late 2018 or early 2019.

Sky School was founded by Polly Akhurst and Mia Eskelund. Both are alumni of UWC (United World Colleges), which has 17 schools and colleges across four continents and includes a stated aim that around five per cent of its students should be refugees or from a displaced or persecuted background.

The Sky School founders both worked on an initiative at UWC to bring on board another 100 refugee students but started to talk about how to reach a greater number. Eskelund explains that Sky School is inspired by the UWC mission to achieve a peaceful and sustainable future through education. Many of the early volunteers have a UWC background and there is a partnership with UWCSE in Singapore.

Planning for Sky School started in October 2016 and included research and a lot of conversations. The founders concluded that secondary education was being neglected, with most focus on primary, and that this constituted a main bottleneck to youngsters moving on to university and other forms of training, as well as blocking them from future employment.

It was decided to test some of the assumptions with a pilot so a six-week course was devised on social entrepreneurship, targeted at young refugee students between 16 and 24 years old who had not completed their secondary education. The aim was to see if there was a need and whether it could be delivered through a blended online/offline learning model. In terms of the choice of subject, the aim was for something that “had value in its own right, centred on skills that they could use in their daily lives”, says Eskelund. UWCSE helped to develop the course.

There are initial Sky School hubs in Amman (Jordan), Athens, the Kakuma refugee camp in Kenya and the Beqaa Valley in Lebanon. There are 80 students in this phase, of which 30 are in Kenya. A few are not within access of any of the hubs, so that their courses are purely online, without the hub interaction with other students and volunteers (one student is in Syria, another is an Afghan refugee at a detention centre in Indonesia).

In delivering learning, Sky School uses the “flipped classroom approach”, which means that students are introduced to new concepts in their homework, which happens online, but come together several times a week to discuss and reflect on their learning. It is a new way of learning for many of the students who are used to a more traditional approach.

The reaction from those on the pilot has been extremely positive, says Eskelund. “The students are really enjoying it. It is student-centric and they appreciate being active participants.” Some people predicted a high drop-out rate because of the challenges and state of flux of the participants but this has not been the case so far, she says, although she accepts it is early days.

The mobility provided by the online platform is useful so that courses can be picked up by a pupil who moves and, if necessary, courses can be taken over a longer period than planned if there is disruption. There has already been one student who started in the Greek hub and who will soon be resettled in Germany, with the mobility allowing the course to be resumed in the new country. 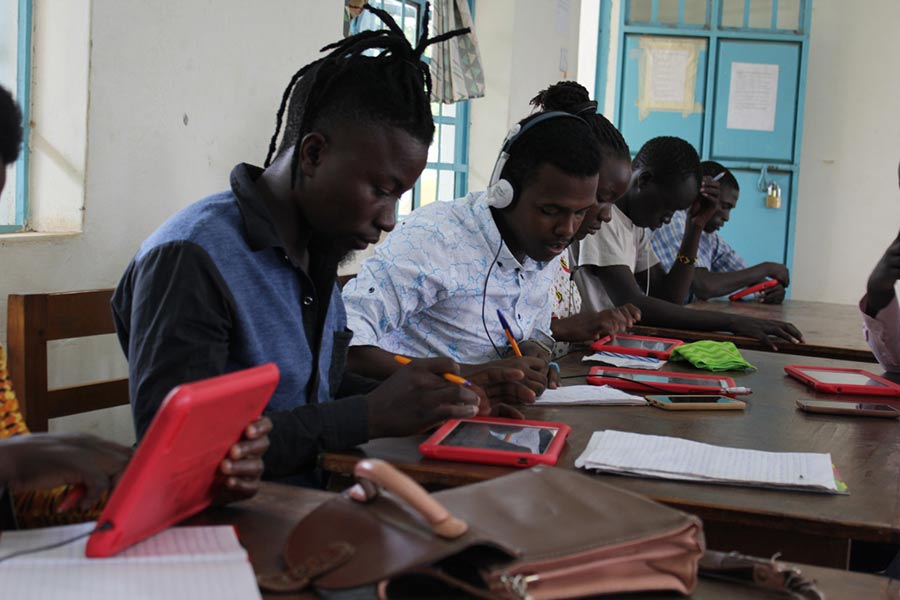 In terms of partners to date, a Danish business and design school, Kaospilot (pronounced chaos pilot), supported facilitator training and was involved in the design of the six-week online course.

“We thought generally that the technology platform would be one of the easiest parts,” says Eskelund. It needed to be simple and mobile-friendly, as most students do not have laptops or tablets. In fact, after a lot of research, she posted in despair on Facebook at the difficulty in finding a suitable platform and this led Sky School to Aula. This was building a communication platform for education that was very intuitive, with an easy-to-use app, she says. Aula is now Sky School’s technology partner.

Mikkel Lauritzen, Director of Partnerships at Aula, says the company has been “very much under the radar, we’ve been busy building the product”. The development started in 2016 and the company has its roots at the University of Oxford. Backed to date by a group of investors ranging from professors to entrepreneurs, its aim is to make digital learning infrastructure more engaging and active.

Aula has deliberately not sought to build everything itself but to have a platform that integrates easily with best of breed tools and educational databases, similar to other ‘conversational’ platforms such WeChat and the team communication platform, Slack.

“We wanted to focus on creating a sense of community, to increase retention rates and a wider participation,” says Lauritzen. As an example, students could start to engage with other students, teaching staff, the welfare team and others after receiving an acceptance letter for university, before commencing their further academic life, thereby easing the transition.

Aula has worked on around 230 pilots in 30 or so universities to date, with initial institutional pilots having started at University of Oxford’s Said Business School, involving around 500 students, and Ravensbourne design and digital media college in Greenwich, with around 15 percent of its students migrated to Aula. Next year, Lauritzen says, the expectation is to start wider pilots with another 15-20 universities, mainly in the UK.

Aula was keen to work with Sky School because “we think it’s a very cool project to support”, says Lauritzen, but also because it focuses Aula on ensuring its platform is fully functional for mobile as well as being a good test for student retention, given the challenges of Sky School’s participants. Although clearly a commercial company, Aula provided the platform to Sky School for free.

“There is a huge lack of content for this age group,” says Eskelund. UWC uses the International Baccalaureate and although Sky School is not directly using this, she says it is developing its own curriculum and diploma programme which will have a global focus and outlook, but will be localised by taking in students’ own experiences and context.

Its courses will be multi-lingual and there is no cost to the students. The pilot has been funded by a few individual donors but there will be a wider push for funding, including from various foundations. Crowd-funding might also be an option at some point, she says. Sky School didn’t want to make a major public push for funding at the outset because “we were aware that we would face many challenges, and we were looking for long-term support”, she says.

Planning is now underway for the full set of courses. A group is being put together for this that includes curriculum and refugee specialists. The expectation is that other schools will be engaged to develop individual modules. Each course will be of individual value, says Eskelund. She also envisages Sky School being contracted to provide courses for other entities working with refugees.

“A key challenge is accreditation and recognition,” says Eskelund, “to ensure that they have opportunities when they graduate.” Its ambition is to reach 15,000 students by 2025. She concludes: “Sky School is building a flexible and scalable approach to secondary education for young refugees, because no one should have their education disrupted just because they are affected by conflict.”