Sky School’s efforts to provide vital secondary school education for refugees across the globe has moved on a lot in the last six months or so. When Smarter Communities spoke to co-founder, Mia Eskelund, last November (https://smartercommunities.media/sky-school-rebuilding-secondary-education-refugees/), a first pilot was under way. What have been the experiences from the pilot and what has been the progress elsewhere?

Fifty refugees enrolled for the initial six-week pilot which was intended to test the concepts, technology and logistics towards a planned full curriculum that will lead to a recognised high school diploma. The model adopted by the not-for-profit start-up combines online and offline education, with the pilot using three hubs, in Amman (Jordan), Athens, and the Kakuma refugee camp in Kenya.

“We were warned by people that it would be incredibly hard, that there would be a big drop-out rate, people would only enroll for the certificate,” says Eskelund. So one of the key positives from the pilot was that 72 percent of students completed it. “As soon as it got going, they stuck with it.”

There was good feedback on the approach, which is described by Eskelund as “enquiry and discussion-based”, so different from the formal education that many of the pupils had previously experienced, usually involving a teacher at the front of the class telling them what to do.

The initial course was on social entrepreneurship and all of those who completed it said they would recommend it to a friend. It was seen as relevant and practical. “Overall, it was seen as a very positive experience,” says Eskelund.

Polly Akhurst, the other co-founder, adds that the need for the pupils to express themselves and speak in class helped to build their confidence. The pilot also showed that the online learning platform worked well and was straightforward to adopt. The course was shown to have quite a big impact on students in a short space of time, with students reporting increases in confidence and in some cases a change in mindset. 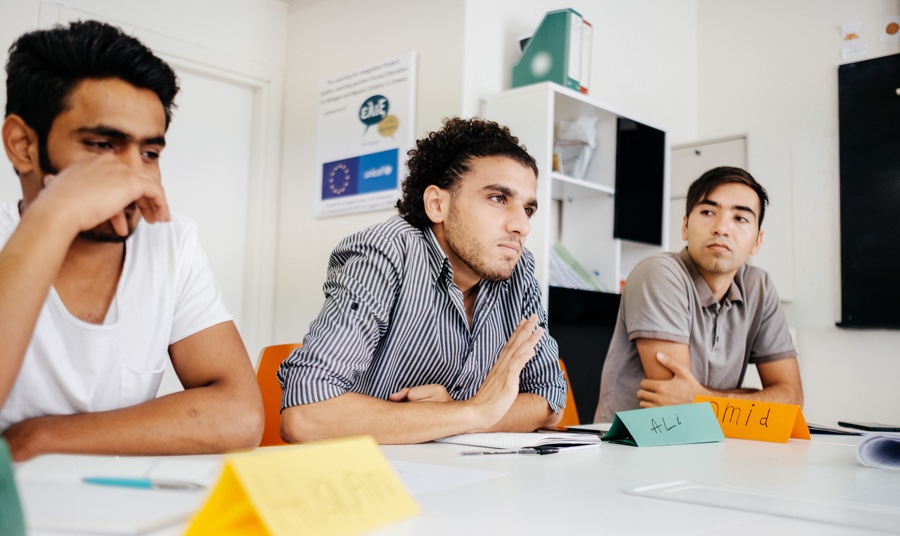 Pupils in Athens on the new peace building course

The social entrepreneurship module is being reworked and two others are being launched – ‘Peace building in your community’ and ‘Identity and culture’. In total, ten modules will make up the full diploma course, with these at different stages of preparation.

The latest courses have stemmed from two-day ‘hackathons’ involving around twelve volunteer educators, who have typically worked previously with refugees, alongside refugee learners. Curriculum creation is often a long and expensive process, says Eskelund, but Sky School had neither the time nor the resources to do this and the hackathons proved a productive way to quickly help to create high-quality courses.

The new courses will run for ten weeks, allowing more time to develop projects and ideas, and others are expected to cover mathematics; IT, innovation and scientific literacy; global and geo politics; mediation and community action; and sustainable development and the circular economy. The full diplomacy course of ten modules is scheduled to be ready in the next 18 months. At least one more of the modules will be rolled out this year, potentially maths, says Akhurst, as it is markedly different from the initial three courses.

The peace building course has just started in two Greek locations, Athens and Chios, to be followed by Kenya next week, Jordan in late August and Hong Kong and Lebanon in September. This new course has been positively received, by both NGOs and students, says Eskelund. As one student observed, she says, “my country has been at war for 35 years, I want to know why”.

The addition of a learning hub on the Greek island of Chios demonstrates how Sky School is expanding through partnerships. A UK charity, Action for Education, has been working over the last two years to provide education for some of the 3000 asylum seeking children on the Greek islands, of which less than 15 percent have access to formal schooling. Action for Children is now delivering Sky School’s course. Volunteer participants of the course hackathons at UWC Maastricht

Charities working on the ground in refugee camps and communities typically do not have time to develop education courses themselves, with so many other priorities, explains Akhurst. Sky School had expected at the outset to deliver the courses itself through its own hubs but the partner route looks ideal and will also allow a quicker and wider roll-out.

The planned launch in Hong Kong is another example. Akhurst admits that Sky School previously had no knowledge of the refugee situation here. In fact, there are an estimated 14,000 refugees in Hong Kong, often living in very cramped conditions alongside undocumented migrants, and in a very precarious ‘under the radar’ position, having gained entry on tourist passports. “It is a quite dire situation that not a lot of people know about,” she says. Sky School is now partnering with one of the handful of organisations working with refugees in Hong Kong to deliver its courses.

In Bangladesh, Sky School is also in conversation about a similar tie-up with a partner working with Rohingya Muslim refugees who have fled persecution in Myanmar (an estimated 800,000 have crossed the border in the last year).

A different partner is not-for-profit, Jangala, which is developing low-cost, high-performance Wi-Fi systems for use in humanitarian situations. Sky School’s partner in the Kenyan Kakuma camp, URISE Initiative for Africa, recently took ownership of one of the devices to enable it to run the peace building course. URISE has built its own community learning centre, which had electricity but no internet connectivity.

Funding to date has come on a roughly 50/50 basis from foundations and individuals. In particular, Sky School was approached by the New York-based Catalyst Foundation for Universal Education, set up by John Sexton, former president of New York University, and this now provides funding to help with the development of the curriculum. Another supporter is the Switzerland-based Kahane Foundation.

UWC (United World Colleges) has been a partner from the outset. It has 17 schools and colleges across four continents and a stated aim that around five per cent of its students should be refugees or from a displaced or persecuted background. Singapore-based UWC South-East Asia is lined up to work on a number of areas going forwards, including curriculum development and communications support. Eskelund, Akhurst and many of the initial volunteers had a UWC background.

At the outset, “some people were really excited, some said, you’re crazy”, says Akhurst. The progress over the last year has brought the ability to show that the model works, that it has a positive impact and this, in turn, builds confidence for partners and funders.

Only 23 percent of refugees have access to secondary education. It has been an area that few have focused on, with most emphasis on primary or higher education. So Sky School’s work is clearly much-needed. A the end of the day, it can have a major impact on individuals who have been denied the education that most people take for granted and helps them to rebuild their lives.
By Martin Whybrow|2018-08-08T17:20:53+01:00Aug 7th, 2018|Society|0 Comments