The Isles of Scilly, off the south-west tip of the UK, have become a hot bed of innovation, particularly around energy. Why has this happened and what has attracted the interest of large companies?

The Isles of Scilly have a small population, high fuel poverty, very expensive waste management, precarious energy and water supplies, extremely low levels of renewable energy generation despite lots of sunshine and wind, and nine miles of A-roads but 1200 cars. Such is the planned leap forward on all fronts that it is now being described as providing a potential blueprint for the future of UK energy and as a flagship in a number of other areas as well.

The moment to innovate often comes “when backs are against the wall”, says Theo Leijser, Isles of Scilly Council chief executive. On many of these counts, that stage had been reached, where doing the same things as always, just a little bit more efficiently, was no longer a viable option.

It now has the stated aims of:

The initial vision stemmed from a Smart Cornwall Project, five or six years ago, which then led to a series of tenders for partners. Centrica is the main partner on the mainland, with a £19 million trial underway to test the role of flexible power generation and storage in up to 150 homes and businesses across the county. It is working with energy storage specialist, redT. Dubbed the Cornwall Local Energy Market, other partners are Western Power Distribution, University of Exeter and National Grid.

The compact and isolated aspects of the Isles of Scilly mean that they can be a good test bed for ideas, which can then be scaled up elsewhere. This is a key reason for the interest of a few large companies, particularly Hitachi, which won this tender.

The population is around 2500 “so everybody knows everybody else”, says Leijser. There is a single cable to the mainland for the energy supply and a back-up diesel generator. The economy is largely services-based, particularly linked to tourism, which combined with the high energy costs (with heavy reliance on oil and gas) explains the fuel poverty. In some ways, the potential need for water desalination and the huge amount of energy needed for this was one of the main trigger points for change, he adds.

From this mix, “we can create this live laboratory and can test ideas”, says Leijser. Decisions can be made quickly and the likes of Hitachi can try out schemes, for a relatively low investment, and can then replicate them elsewhere.

On the energy front, having won the Isles of Scilly bid, Hitachi is now working with energy storage specialist, Moixa, and smart energy management software company, PassivSystems. They will build a platform to allow more efficient use of locally produced energy by fine-tuning home energy use and balancing demand and supply across the network. Using sensors, electricity loads in homes will be monitored, so too electric vehicles, home batteries, smart heating technologies and other infrastructure.

Importantly, all of the solar photovoltaic and other equipment for the publicly-funded project will be passed to a not-for-profit community enterprise so that the benefits are felt by everyone. For solar, 450kw of solar PV energy will be installed, most of it before summer 2018. Much of this will be on council-owned homes on St Mary’s, plus council offices and a solar ‘garden’, with the council providing 20 per cent of the funding.

The value of the energy produced will be shared through an energy tariff available to all islanders. Eight of the homes will also have air source heat pumps and five will have Moixa home energy storage systems. In addition, more than 100 businesses have now signed for energy efficiency support (with a target of 200 by 2019). This includes free energy audit and advice, energy monitoring equipment and training.

Transport is also in focus, says Jonathan Adey, from Hitachi’s digital solutions group, with the relatively low distances making the islands ideally suited to shared ownership of electric vehicles. The project is now in the final stages of securing funding for the infrastructure to support this, he says, with the intention again to ultimately move the assets to the community enterprise.

To make use of the energy within the car batteries, the intention is to have integration to allow energy to flow both ways. A challenge will be working out when to charge from and to the grid, says Adey. The demands of the electric vehicles will see further roll-out of solar PV, he adds, and funding is also being sought for anaerobic digestion on the islands.

Hitachi has completed a prototype in its Maidenhead labs of the system to be implemented on the Isles of Scilly next year. This type of transformation of the energy sector is much touted and the Isles of Scilly are likely to be a showcase for what can be achieved. These sunny and windswept isles might not be the most obvious place to look for innovation but many of the challenges and the relatively small scale of the islands make them an ideal place to start. 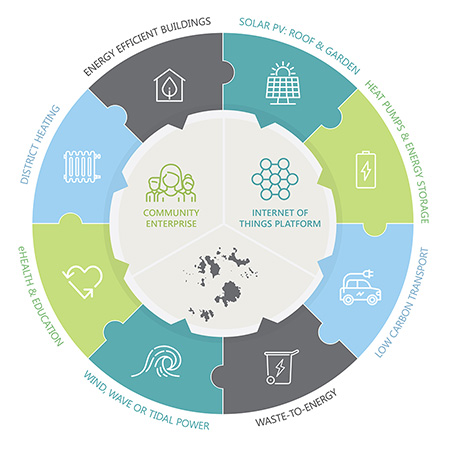 The Isles of Scilly priorities