Top down or bottom up? How to tackle congestion

Many cities are using the ‘stick’ approach when it comes to reducing traffic and emissions, with congestion charges and the like. However, in Berlin a pilot project has shown what can be achieved when working with residents.

At last week’s 2017 Polis Conference in Brussels there was a lot of discussion about how to reduce emissions and congestion. Not surprising, really, given the title of the EU cities’ event: ‘Innovation in Transport for Sustainable Cities and Regions’. It is clear that there is no agreed approach, with cities pursuing widely differing strategies. However, amidst the grand city-wide strategies, with their mixed outcomes, a pilot project in a Berlin suburb suggests that working closely with residents has considerable potential.

“Chaos” was the word used by Erik Jonnaert, Secretary General of the European Automobile Manufacturers’ Association. There is no consistency so it is really confusing, not only for the automotive industry but also for consumers, he argued. Even in a single country, there are major differences. Take the UK as an example. London was a pioneer of the congestion charge in 2003, then of a low emission zone in 2008, with further charges planned, for the centre of the city and also potentially for the Greater London area. However, Manchester has no such plans while Leeds last week proposed a low emissions zone.

London: Lilli Matson, Director at Transport for London (TfL), pointed out that the congestion charge had an almost overnight dramatic effect on traffic volumes while the low emission zone has had a big impact in reducing particulates. The aim is now to have further restrictions to ensure that journeys that absolutely have to be by vehicles are as clean as possible, she said. It is now health and air quality that tends to motivate people to accept the regulations, she added. “The real challenge will be taking the vision to other, less dense parts of London where public transport is not so good.” The context is markedly different between the centre, inner and outer parts of the city, she pointed out. In the centre, there are low levels of car ownership and usage so most congestion and air pollution is done ‘to’ residents, rather than ‘by’ them.

Manchester: The Greater Manchester Authorities received a collective bloody nose in 2008 when residents rejected congestion charges and a series of transport improvements within a referendum. No regulations are proposed at present, said Richard Banks from Transport for Greater Manchester (TfGM) and newly elected Polis President. He felt that it will be air quality targets that will necessitate legislation, with the UK government now pushing responsibility down to local authorities to meet these, but Manchester has not yet defined any. The city now has a cycling and walking commissioner and a host of initiatives to “reroute, re-mode and reduce” traffic as well as improving cyclist safety (including Triximirrors at junctions and kerb segregation).

Gottenburg: Somewhere in between is Gottenburg where, as Deputy Mayor for Transport, Shahbaz Khan, pointed out, the city has sought to address historically poor air quality, high levels of car use and a rapidly increasing population with a low emission zone, heavy investment in public transport, including electric buses, and other measures. While the congestion charge reduced traffic, this was largely offset by the increase in population, so while city leaders regarded keeping the status quo as a success, people didn’t see the difference, which was a communication challenge, he said.

Brussels: Arguably some way behind is the city that hosted the Polis event. It was only at the start of the 1990s that one of Europe’s most attractive car parks was given over to pedestrians: The Grand Place. The city remains heavily car-centric, much of it from workers and tourists in the centre, as opposed to residents. In 2014, there was a civic disobedience picnic in the Place de la Bourse, within the wider Pic Nic the Streets civil disobedience movement, to demand the pedestrianisation of this square.

The city’s municipal authorities responded in the same year by announcing their intention to pedestrianise the Boulevard Anspach between the Place De Brouckère and Place Fontainas. It is one Brussels’ choked ‘Boulevards Centrales’ and was an ambitious response. However, the project has been beset by problems and is still far from delivery.

No works have started but they are finally promised to commence this month. They will ultimately involve redirecting eleven bus routes and reversing the direction of some other roads. Most contentiously, four additional underground car parks were proposed, to add to the 20 that already exist in the five square kilometre centre of the city. “We have a very active civic society in Brussels so there was a lot of resistance,” said Dr Sophie Vermeulen, an urban geographer at Vrije Universiteit Brussel.

There was a need for hard facts but only fragmented data, she admitted. A draft report was only published last week. Youngsters, residents close to the centre and frequent and foreign visitors were shown to be generally supportive of the pedestrianisation. Not surprisingly, frequent car drivers are the most resistant; public transport users are quite positive but often wanted more information. A study has also been kicked off to look at the logistical impacts of the scheme on existing businesses.

This “can be part of a paradigm shift to make Brussels a more sustainable centre”, said Dr Vermeulen, but admitted it has been a very difficult project with mistakes along the way. Those mistakes have included only very late involvement by the public transport authority and, while there was the political mandate and budget, “no communication plan at all and very poor civic involvement”. If the focus had been on shorter, more manageable projects, would that have been better use of the time, resources and money? 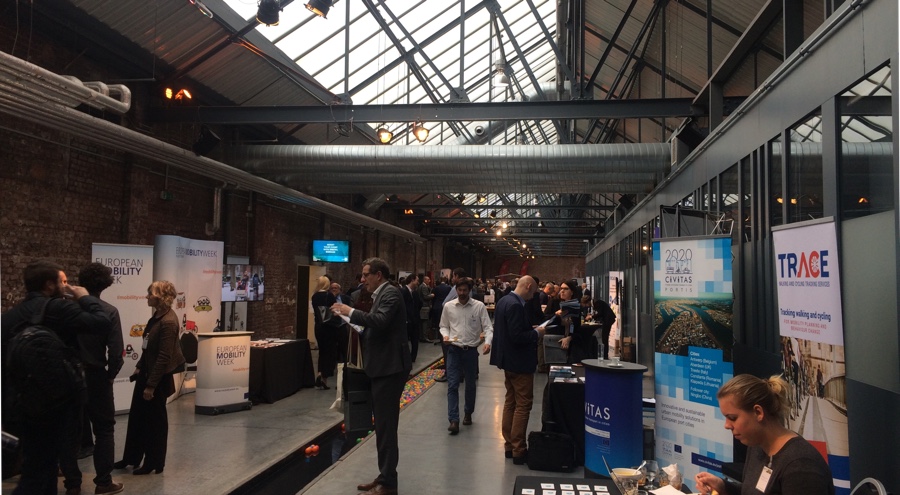 The Egg venue in Brussels

The “carrot” rather than the “stick”: Berlin’s experience

Amidst all of the current and planned charging, a pilot project in Berlin points to a possible more consensual way forward. Dubbed Neue Mobilität Berlin, it has initially focused on one road in the Mierendorff-Island neighbourhood and a square in the nearby Klausenerplatz-Kiez neighbourhood, both in the north-west of the city. These were identified in part because there was felt to be already civic and government support for change. Around half of cars are more that ten years old and are parked, on average, for 23 hours a day, with much of the parking being on-street.

An initial 13 residents volunteered to remove their cars for two weeks. The freed up parking spaces were allocated for car share and e-scooter schemes and community use, including meeting areas, urban gardening, events and a children’s play area. A Deutsche Bahn Call a Bike station was also temporarily set up in Klausenerplatz-Kiez.

“It is a very bottom-up approach,” said Johanne Reinhardt from one of the partners, public/private agency, Berlin Agency for Electromobility (eMO). The residents’ opinions were sought before and after the pilots to see whether the provisions were sufficient to persuade people to give up their cars and what else they would need. It is felt the most likely types to replace their cars are the ‘car captives’ who don’t like driving but need a car for day-to-day mobility, and ‘car pragmatists’ who use it on a needs basis and would switch if there was available on-demand mobility.

“Probably more than half of the private car stock could be substituted,” said Frank Hansen, from another – perhaps somewhat surprising – partner, BMW. In fact, it has an Urban Mobility Group and has an active interest in car-share schemes having launched its DriveNow scheme with Sixt in a number of German cities (2000 parking spaces have recently been freed up in Munich for car-sharing, for instance) and it also now has a pilot service in Seattle.

There has been a similar pilot in Hamburg (first mover.hamburg) and another is planned for Munich. It is estimated that a car-sharing vehicle replaces up to six private cars and there is an increased use of public transport, while some of the freed up space can be used to improve the life of the community. A benefit of the alternatives, as opposed to car ownership, is price transparency.

The need to have more dedicated car-share spaces is key, said Hansen. There will be projects in more and more neighbourhoods, more mobility days to raise awareness and a big campaign next year around persuading people to live without a car for a month. The project is described by Reinhardt as an “Open Cooperation Platform” so is open to anyone to join, including other car-share operators.

Conclusion: A Bit of Everything

City leaders will continue to have a major influence on what form of mobility they adopt and there will never be ‘one size fits all’. At the Polis event, European Commissioner for Transport, Violeta Bulc, acknowledged the need for standardisation to give clarity to consumers and help manufacturers to plan with confidence. The European Commission now has a website that sets out details of charge schemes across Europe – www.urbanaccessregulations.eu. Isabelle Vandoorne, Deputy Head of the Sustainable and Intelligent Transport Unit at the EC, said that there was no interest from the community five or ten years ago for the EC to become involved in standardization but that has changed. However, she sees no likelihood that the EC will impose anything – “definitely not”.

There is no doubt that the way forward will be a combination of all of the above types of schemes, plus others such as car scrappage (Rotterdam and Amsterdam have been particularly aggressive with these, with good results) with the added dimension of electric and autonomous vehicles in the mix. Technology might also make restrictions more meaningful in the future so that, for instance, the charge for a driver entering a low emissions zone might be at least in part based on the distance travelled in that zone. There is also the shift that will come from demographics – the average age of buyers of new cars is now 52-53 in Europe.

But the “bottom-up” approach, as under way in German cities, should not be ignored amidst the grandiose schemes and regulations. Bringing citizens on board and empowering communities to foster change is potentially powerful not just in the streets and squares where it is implemented but in the wider neighbourhood as the results are communicated. How many neighbourhoods could have been reached in Brussels if this had been the focus for all of the time, resources and expense of the still undelivered Boulevard Anspach scheme?