Utrecht has what many would consider to be a radical strategy for reducing traffic in the city: It is deliberately downgrading roads. After a successful pilot, it has a much larger section of the inner ring-road in its sights. In the pilot, a two lane-by-two lane artery with an additional bus lane has been reduced to a single lane each way, with no bus lane. The land that is freed up as a result can be turned into green space, planted with trees and given over to cyclists and pedestrians.

“Downgrading for some people is upgrading for others,” points out the city council’s senior advisor of dynamic traffic management for environment and mobility, Peter-Jan Kleevens. Local residents, who might have opposed such a scheme at the outset, tend to be won over when they see the improvement in their neighbourhood.

Nevertheless, the policy throws up all sorts of questions and Kleevens is an ideal person to talk to about these. Sitting in front of the real-time traffic management system that shows the status of all of the city’s roads, he is enthusiastic about what has been achieved and what is to come.

On the screens, colour-coding identifies the traffic flows and the status of traffic lights at each junction, with the latter able to be automatically adjusted or turned on when the radar system predicts the build-up of traffic. Operators can zoom in, down to street level views, and out. The IT and dynamic traffic management is an inherent part of the downgrading because it is important that traffic still flows as much as possible. That includes public transport as well as private vehicles.

The screens show the three categories of roads in the Netherlands: those controlled by the city council, others that are the responsibility of the provincial authority and the main national routes that belong to the central highways authority. This necessitates a strong partnership between the different authorities.

By virtue of being in the centre of the country, Utrecht is different to the three largest Dutch cites of Amsterdam, Rotterdam and the Hague, says Kleevens. A lot of Utrecht’s traffic isn’t destined for the city but is passing. The country’s three busiest highways all skirt Utrecht and almost as soon as you turn off them you are immediately in the city.

This means there is very limited buffering, says Kleevens, so that within minutes a problem on the highway will have an impact on the city’s roads and vice versa. “It is why we have worked with the highway authority and provincial authority for many years, we can’t do without each other.”

The decision to start to downgrade was, naturally, a political one. It was made a couple of years ago and saw a lot of resistance particularly from car-friendly politicians but the city’s alderman was adamant that this was the way to go. With the pilot, says Kleevens, “at first the neighbourhoods were complaining but now they are super-happy because they can see a nicer environment”.

Air quality is another incentive, with the city likely to incur a penalty from the EU because it has not yet reached its targets.

“It was very clear, we don’t want any extra roads, no extra asphalt, we want to bring it back,” says Kleevens. The main goal is to keep traffic out of the city and on the surrounding national roads for as long as possible, with the better able to support heavy volumes. “We have more traffic in and out of the city than can actually be handled.” If a vehicle heading for the city is on the national network, the aim is to keep it on there until it is as close to its city destination as possible.

The technology, including the traffic management system, has been in part funded from a nation-wide environmental scheme and other national programmes, with part-funding as well for the pilot. The traffic management system is a third-party off-the-shelf offering but has been enhanced by Utrecht, which owns the Intellectual Property Rights to its version. Rotterdam uses the same developer and there is sharing of knowledge and algorithms.

The pilot, Goylaan in Utrecht Zuid, did not take long to implement – about three-quarters of a year – and has now become permanent, so can be viewed more as a proof-of-concept than a pilot that starts and then ends, says Kleevens.

The Goylaan pilot and the next section are on the city’s inner ring-road. It was built as two lanes in each direction around 35 to 40 years ago and enhanced for maximum speeds and throughput of traffic around 20 years ago, says Kleevens, “but that was the old concept of traffic management”. As soon as the traffic starts to build up on the pilot section, automated upstream adjustments are made that remain in place until the flows are manageable once more.

The radar system and supporting algorithms were built with partners and this ‘Queue Estimator’ system removes the previous sole reliance on cameras.

SatNavs are both a challenge, in that they might still direct drivers via the routes that the city is trying to ease, but also an opportunity. Most advice is now based on actual speeds on routes in real-time so if the city succeeds in slowing the flows on its target routes, including by reducing speed limits, so the SatNavs should oblige with alternatives. 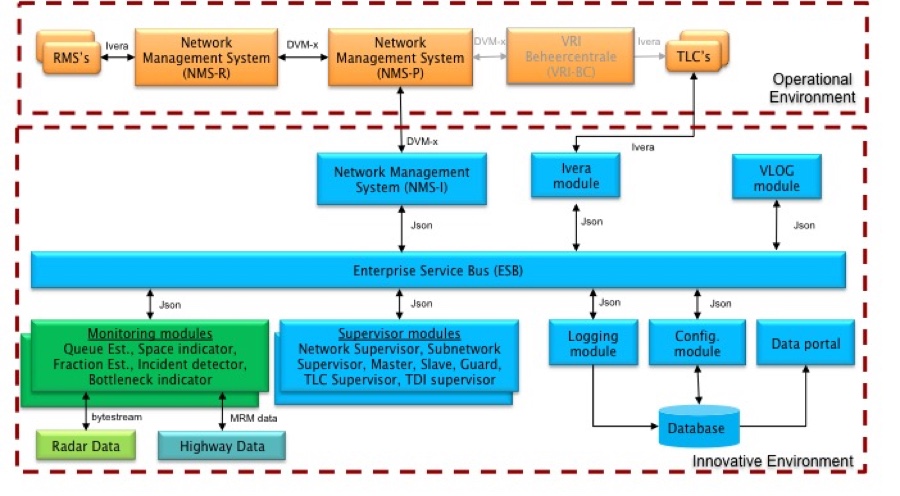 Although considered, the city does not currently have a congestion charge but does ban older diesel vehicles, backed up by heavy fines, and there are prohibitively high parking charges. It is encouraging electric vehicles, including putting in infrastructure to support these, and car shares. It is looking at what might be legal to specify in terms of car ownership for new housing developments.

There are projects around freight deliveries, including distribution centres on the outskirts where goods are consolidated and loaded onto smaller vehicles. It also uses its extensive waterways. The council has a ‘beer boat’ for delivering to the many city centre cafés and restaurants, with this contracted out to a third-party.

The city, as elsewhere in Europe, is also aided be generational changes, with far fewer youngsters now owning cars. A lot of students study in the city and many stay when their courses finish, so it has a relatively young demographic.

The next section to be downgraded is to the east of the city and is much longer than for the pilot. It will be done in phases, starting with a middle section, and throws up some new challenges. For one thing, unlike the pilot, there is no immediate parallel national road route, with traffic needing to take a wider loop of the city as the alternative. It also includes a section that links to the newest major development in Utrecht, Leidsche Rijn, and this straight portion is often used as a shortcut.

The first phase is through a particularly affluent part of the city, so it remains to be seen how strong the opposition is and whether, with communities of lawyers and other professionals, this results in concerted, organised challenges. There are also fewer options to buffer the traffic.

“There are quite a lot of different types of problems but the decision has been made that it will be downgraded, no matter what,” says Kleevens. Work on the first phase will start this year.


How things have come full circle, in Utrecht, at least. Here the car is no longer king and the mantra of, build more roads and traffic will come, has been taken to heart. The successful pilot is a start and now be used to help to win over new opponents as the city moves on to the larger, more complex next stage.