VeganNation has the ambitious aim of building a global community of vegans, enabled by a vegan cryptocurrency. Its VeganCoin, due to launch before the end of the year via an Initial Coin Offering (ICO), will operate on a blockchain-based decentralized marketplace. What have been the drivers behind this and where is it heading?

Co-founder, Isaac Thomas, explains that the grand vision was derived from an initial initiative centred on opening physical vegan restaurants in US college campus towns. “This eventually led us to where we are today,” he says. He had worked in real estate and started to plan a vegan restaurant chain. However, there then came the realisation that bricks and mortar restaurants would not meet the daily demands of vegans and that there was a much bigger need.

Thomas, his co-founders and team have been working on VeganNation for around one year. VeganCoin will be used for buying meals, produce and other services, both on- and off-line. However, while the cryptocurrency is important, he says, it is only one aspect.

There will be an app, for IOS and Android, which will include the ability to share content, make restaurant reservations, buy vegan products and services via the VeganNation online marketplace, share food and accumulate points. It will be available for beta testing ahead of the main ICO.

There is also intended to be an innovation aspect, with part of VeganNation’s revenue directed towards innovation and entrepreneurship to find more sustainable solutions for vegan-friendly cuisine and environmental challenges.

The environmental concerns clearly sit comfortably alongside the vegan ones and, indeed, are a key incentive for many vegans, alongside animal cruelty and health benefits. Livestock farming alone is estimated to contribute 25% of greenhouse gas emissions, alongside massive water demands, deforestation, pollution, over fishing and soil degradation.

Others are attracted to veganism through their religious beliefs. VeganNation is based in Israel and among those involved are a number of religious scholars, such as Asa Keisar, who view eating meat and animal byproducts as no longer permitted according to Jewish sources, because of the cruelty inflicted on animals by the modern mass production of meat, dairy and eggs.

Whatever the motives, the vegan community is growing rapidly. There are estimated to be more than 700 million vegans (300 million outside India) and the plant-based economy is an ever more important and mainstream one.

The ICO is now scheduled to run from October to the end of the year, which is somewhat later than an originally ambitious timeline. There is a pre-sale period at present for investors and high net-worth individuals, with a crowdsale to follow, where there will be a set minimum contribution which Thomas says will be below $100. The presale is going “amazingly well”, he adds. 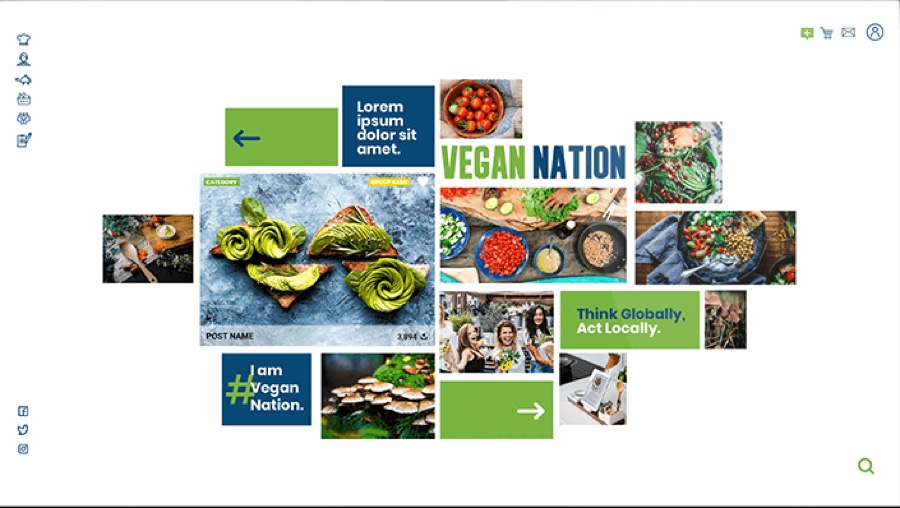 A prototype of the VeganNation home page

The decentralised and trust-based attributes of blockchain (VeganNation is using Ethereum) will allow transparency of supply chains as well as a secure way to exchange data, goods and services between vegans.

There are around 250 partners signed up, says Thomas, with this number increasingly steeply each week. They are set to accept VeganCoin when it is launched and are spread across North and South America, Europe, Asia, Australasia and Africa. They comprise a wide range of businesses, he says, as well as NGOs.

Those businesses include a lot of restaurants and other food outlets but also businesses run by vegans as diverse as hotels, clothes and jewellery retailers, publishers, yoga studios, fitness trainers and gyms, a vegan lawyer and a cybersecurity company. Any vegan who owns a business and wants to participate can do so, he says.

The take-up has happened without a major marketing push, with due to happen shortly. “One thing about the vegan community is that things can go viral fast if something captures their imagination,” says Thomas.

“We are building a new, global ecosystem for the vegan community,” concludes Thomas. While the 250 partners are just “the tip of the iceberg”, in terms of the total number of vegan and vegan-run businesses around the world, it looks as though VeganNation has, indeed, captured a lot of imaginations. The real test will come with the full launch but the concept is fascinating and the early signs are promising.
By Martin Whybrow|2018-08-14T14:25:57+01:00Aug 14th, 2018|Society|1 Comment