Is it possible to build a sustainable business around food waste? Founded in 2014, Netherlands-based Instock now has 100 staff, three restaurants (with another two planned for this year) and a host of other activities. What inspired the founders, what has been achieved and what’s next?

Instock now has restaurants in Amsterdam, the Hague and Utrecht, with two others planned for 2018. It has potato and, recently launched, bread-based beers, granola, a cookbook and an online fruit and vegetable delivery service. It has a converted fire engine as a pop-up food truck. It also takes its messages to schools, runs regular cookery classes and is lobbying government to improve labeling.

That’s a lot of progress in only three years, all of it centred on food waste, which currently comes from 168 supermarkets as well as producers, distributors and packagers. It has some funding from Dutch supermarket chain, Albert Heijn, but much of its business, including the restaurants, is self-sustaining.

The Origins of Instock

Instock is a foundation, which means its profits are reinvested and it has a societal goal. The four founders previously worked as assistant managers at Albert Heijn and were inspired to do something about the waste that they saw in their day-to-day roles.

Their employer was supportive and the salaries of the three founders (main picture, above – Selma, Freke and Bart) who now run Instock are paid by Albert Heijn (the fourth now works once more at the chain). Albert Heijn also provides investment for new initiatives – “a small financial push”, says Instock community manager, Djaja van den Berg – including to set up new restaurants. The chain is also a major donor of food, albeit with other stores also now donating. However, the restaurants are independent and self-sustaining, as is the rest of the business.

Instock started in January 2014 and began with a pop-up restaurant in June of that year, then the food truck, followed by its first permanent restaurant in Amsterdam in June 2015. The cookbook, potato beer (working with a local brewery), The Hague restaurant, Utrecht restaurant, granola, and bread beer followed in that order.

The bulk of its 100 staff are in the three restaurants, which are supplied from a range of sources. Food rescue drivers pick up each morning from Albert Heijn’s return freight centre in Zaandam. Much of the produce is close to expiry date but none of it is beyond. One-day old bread is picked up by bike at a few local Albert Heijn stores.

“This is also part of the vision, to find ways to work together rather than pointing fingers”

Meat comes from the Albert Heijn distribution centre, largely stemming from over-stocking. Fish is sourced from the producer or packager. Heineken supplies beers that are soon to expire; bottles of wine are often residual quantities that are too small to fill up the shelves in the Albert Heijn stores. Some of the waste also comes from products that have been damaged in transit.

There needs to be a degree of flexibility from the restaurant chefs but, says Djaja, there is enough predictability around basics such as bread and eggs to be able to commit to some staple items on the menus, such as using the former for waffles and the latter for omelettes. “It is the filling of the omelettes that might vary.”

There is certainly never the problem of too little waste. Instock cannot rescue all of it, says Djaja, and now has its own distribution centre, where it seeks to supply other restaurants and outlets with produce.

Instock complements the efforts of others, including the Dutch foodbank (Voedselbank) network. There is a good relationship, says Djaja, which includes exchanging produce where one or other has too much and a scheme whereby its restaurant customers can donate €12.50 for a voucher which a foodbank user can redeem in one of the Instock restaurants, with Instock matching the donated amount. This has provided hundreds of people with a night out, she says. The converted fire engine that is now Instock's food truck

Instock seeks to work closely with all parties to reduce the waste. “This is also part of the vision, to find ways to work together rather than pointing fingers,” says Djaja. Around 39 per cent of waste is at the producers (over-production, inflexible supply chains, misshapen produce etc), five per cent at the supermarket, 14 per cent within the food service industry and 42 per cent from consumers.

The consumer waste is one reason for the cookery classes, cookbook and educational courses. The latter are aimed at eight-to-twelve year-olds and can be downloaded, while Instock also hosts school visits. Its other activities carry a powerful educational message as well, of course. And as well as extending its restaurant network, it will seek to come up with new products and is trying to make more use of the eight preserving techniques in its cookbook, says Djaja.

Instock would like to see clearer labeling of food, particularly related to the ‘best before’ dates which can be construed by consumers as meaning that produce is no longer edible. Instock lobbies the Dutch government and has met with the relevant minister for food, who was “very positive” about changing the legislation, says Djaja. She is hopeful this will happen in the next couple of years. For some produce, such as pasta and rice, it is debatable whether there needs to be a ‘best before’ date at all. 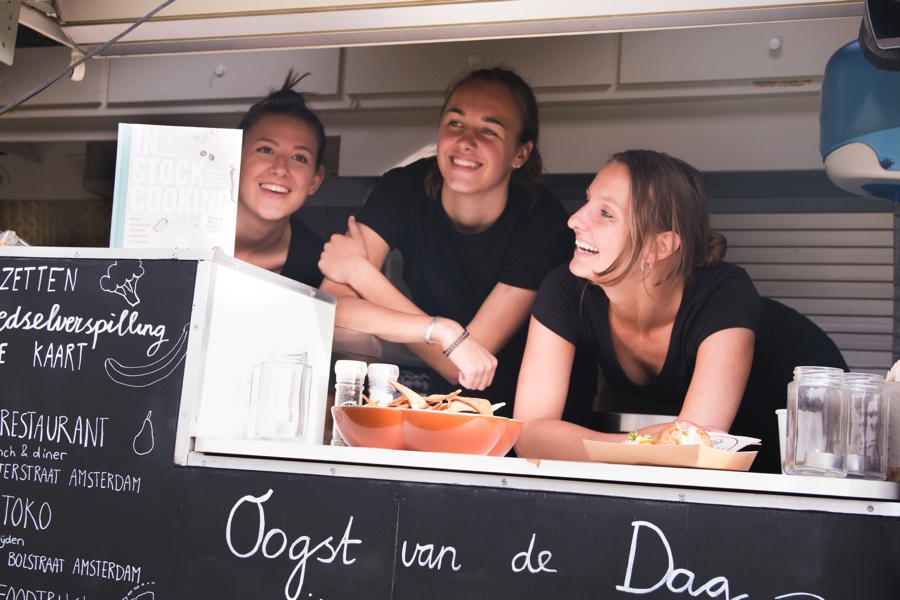 Some of the staff serving delicious food from Instock's truck

A lot is written about food waste but the most inspiring stories relate to those who are tangibly tackling it, either at source – including the ever more active ‘gleaning’ by volunteers of wasted produce from farms that goes on around the globe – or through activities such as those of Instock or, in the UK, food waste charity, Fareshare (which particularly works with Tesco’s).

It could be argued that such initiatives are only making a small dent in a massive problem, given that between 30 and 50 per cent of all food is wasted. It is estimated that each Dutch consumer throws away around 47 kilos of food annually, which is bad enough, but also means a massive amount of unnecessary packaging, transport, refrigeration and preparation.

Nevertheless, it is always much more powerful to demonstrate solutions, rather than just talking about problems, and there is clearly a strong ripple effect from Instock’s activities, in terms of raising awareness, putting pressure on suppliers and politicians, and ultimately changing consumer behaviour.