Where do electrical goods go when they die? In the UK, many of them– but not enough – end up on an industrial estate in Kent. What is the recycling process, what are the business drivers and what more could be done?

There’s good and bad news about the recycling of electrical items. On the upside, they are recycled more or less in their entirety, so nothing goes to landfill. On the downside, in the UK, only about one-third of the small household electrical items that could be recycled go this route. Moreover, of the items that are recycled, it is estimated that around one-quarter are still in working order or could be readily repaired.

To understand what’s going on and what communities might do to improve matters, a visit to SWEEEP Kuusakoski’s facility is fascinating. It is on an industrial estate in Sittingbourne and handles much of the South-East’s electrical goods recycling (as far as South Wales and Devon), constituting around 25 per cent of the UK’s volumes, alongside three similar plants operated by other companies.

This is a good news story: if an electrical item reaches SWEEEP Kuusakoski then 98 per cent is recycled, with the tiny amount left going to a waste to energy plant. Typically, a large portion of the items come from the county’s Household Waste Recycling Centres (HWRCs) – or ‘the dump’ to give them their colloquial name. In Kent, these are operated by Kent County Council (KCC) but sending the items for recycling by SWEEEP Kuusakoski doesn’t cost the council (i.e. tax payers) anything.

The Business Model of Recycling

In many ways, the business model behind electrical goods recycling is as interesting as the logistics. SWEEEP Kuusakoski’s income stems from two main sources:

First, there is the Waste Electrical and Electronic Equipment (WEEE) Directive (hence the name, SWEEEP) by which manufacturers pay for the eventual end of life of their goods. A set of intermediary companies handle the workings of the WEEE system, collecting money from the manufacturers and verifying the volumes taken in by regulated entities such as SWEEEP Kuusakoski.

The second income stream is from the resale price of recycled materials. Most valuable are the commodities such as gold, silver and copper but there’s also value in plastic and some other by-products of the recycling process. Commodity prices can clearly vary markedly over time and this dictates what SWEEEP Kuusakoski charges to its commercial customers for handling their items. 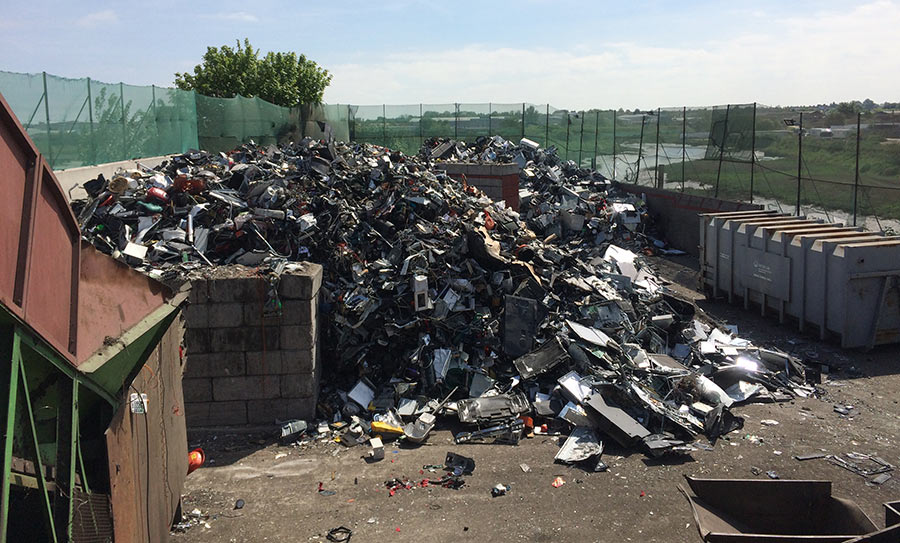 The Business Model of Recycling

In many ways, the business model behind electrical goods recycling is as interesting as the logistics. SWEEEP Kuusakoski’s income stems from two main sources:

First, there is the Waste Electrical and Electronic Equipment (WEEE) Directive (hence the name, SWEEEP) by which manufacturers pay for the eventual end of life of their goods. A set of intermediary companies handle the workings of the WEEE system, collecting money from the manufacturers and verifying the volumes taken in by regulated entities such as SWEEEP Kuusakoski.

The second income stream is from the resale price of recycled materials. Most valuable are the commodities such as gold, silver and copper but there’s also value in plastic and some other by-products of the recycling process. Commodity prices can clearly vary markedly over time and this dictates what SWEEEP Kuusakoski charges to its commercial customers for handling their items.

Like most recycling plants, the operation is a mix of the highly manual and highly automated. The lorries come into the facility and tip their loads. Average volumes are eight to ten tonnes per hour (a Transit truck load is equivalent to about one tonne, by way of comparison). This equates to around 40,000 tonnes per year. At present, the site is mostly working 24 hours a day, six days a week, with 170 staff across three shifts. There is plenty of room to scale if more tonnage can be captured, says commercial manager, Justin Greenaway.

The emptied loads are collected in impressive electrical goods mountains, with microwaves, laptops, TVs, vacuum cleaners and many other items piled high. A Dyson vacuum, a highly desirable item when new not too long ago, sways precariously on the top of today’s nearest mountain. There are also 300 brand new heaters that were seized by the authorities and do not meet UK standards. Mr Greenaway declines to go into the specifics of this haul but points out that it is better that they are properly recycled rather than making their way into people’s homes.

There is initial manual sifting on a conveyor belt as the items enter the process. Each staff member is looking for specific items, some of which are extremely hazardous if not extracted at an early stage. Batteries, particular of the soft lithium type, are a problem as they are highly combustible so can cause fires in the plant further down the line. Gas canisters are another hazard, not always as easy to spot as might be expected.

A large rapidly rotating drum then starts to break up the items into their constituent parts, with the smashing together of everything fairly rapidly achieving this aim. The rest of the processes are a mix of mechanical sifting on size, on material (using magnets and eddy currents plus a sophisticated scanner that identifies and separates the valuable pieces of circuit boards, with their relatively high commodities content) and manual sorting.

In separate rooms, staff deal with items such as TV and computer screens, contributing lead (in old TVs – staff must be tested every six months for lead levels in their blood streams), mercury and other materials, dependent on the age of the equipment. Asbestos, once used widely in household items, is fortunately ever less common but some of the older equipment is relatively desirable, such as old TVs that can yield a considerable amount of copper.

The company was set up in 2007 as SWEEEP and slightly under two-thirds is now in Finnish hands, having been acquired by Kuusakoski, a large, long-established, family-run company that was seeking to expand in the UK. The facility is part of a complicated ecosystem, with many of its materials going on to other companies inside and outside the UK for further processing. This includes even the smallest dust-like residue that is further mined for commodities at another Kent-based company, near Aylesford. Many items go for smelting to Japan, Sweden, Canada and elsewhere, including the pieces of circuit boards, to extract the commodities.

Much of the plastic ends up in China, either directly from SWEEEP Kuusakoski or via another process that turns it into pellets. This might not sound environmentally friendly but nothing is black and white. First, given the global flow of manufactured goods, China is where much of the demand is for plastic, so that it can be recycled for new items. Moreover, most of the containers that have brought those manufactured items to the UK then return empty, so they can be used instead to ship the plastic.

The reason pellets rather than the untreated plastic is increasingly attractive for shipping is that Chinese regulations are now strict, so that they will inspect every container and will reject any consignment that is contaminated with other materials. It is cheap to ship a container load of plastic to China, Mr Greenaway points out, but it is very expensive to ship one back if it has been rejected. “It is false to think that China is a dumping ground, far from it, they want high quality,” he says.

How might Brexit impact the operation? There could be issues attracting staff (around half are UK nationals) but Mr Greenaway believes that the regulations that provide the framework for the industry will remain more or less the same. The WEEE Directive stemmed from the EU – one of many positive environmentally friendly pieces of EU legislation – but it is likely that, even if under a different name, the UK will still participate in this type of system.

The SWEEEP Kuusakoski facility is noisy, with every part in constant motion apart from the occasional planned or unintended down-time. It is also highly regulated, by the UK government’s Environment Agency, and all of the other companies that it supplies further down the recycling chain must also be properly accredited. While it uses a lot of energy, the company ensures that this is from renewables, adding to its green credentials.

How could things be improved? There is the issue of reuse in preference to recycling. Some councils already have reuse facilities at their waste sites (where workable items can be deposited) – Warwickshire is a flagship for this, working alongside a number of charities. However, some of the sites lack the space for this and, fundamentally, there needs to be a market for the items that are ‘rescued’. It is no good collecting electric toasters, for instance, if no one wants second-hand ones.

Second, there is a need for better communication so that people know not to put electrical items into black sacks, hence sending them to incineration or landfill. On a finite planet with finite resources, how much better it is to ‘mine’ existing equipment for gold, copper etc, than mine the earth.

Basically, the more items go the way of SWEEEP Kuusakoski and other such facilities, the better it is for the environment. It is perfectly valid to argue that we should also be looking at behaviour, that our society consumes too much and disposes of things too readily, but the next best option is to make sure that when something is disposed of, it is done in the most environmentally friendly way. And this is where SWEEEP Kuusakoski plays its part. 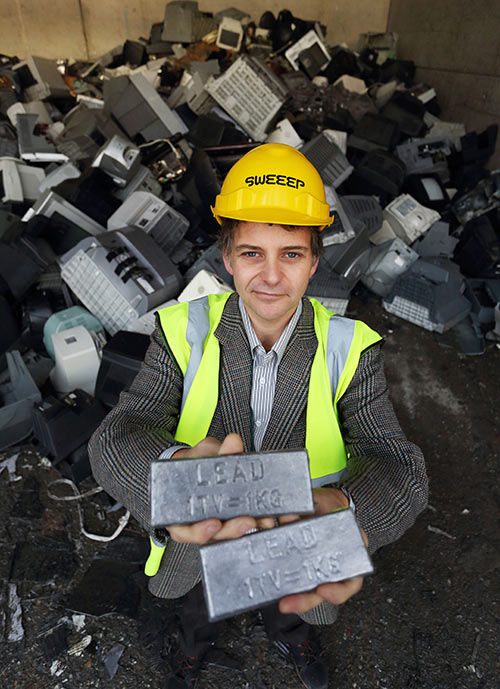