If London, as intended, is to become zero carbon by 2050, then it will need to rapidly accelerate its efforts. There’s a long way to go but there is a promising new-found urgency. A ground source pump and retrofit project for a social housing block in Greenwich and a London-wide group buying scheme for solar PV are a reflection of this.

Unlike most European capital cities, London is lagging behind much of the rest of the country when it comes to green initiatives. At present, London has the lowest solar PV adoption per capita of any UK region and, despite an aim to be zero carbon and zero waste by 2050, there is a long way to go.

The good news is a new urgency, with some tangible projects under way or planned. In part, this comes from the top, from the current mayor, Sadiq Khan.

The carbon and waste goals are within the London Environment Strategy, while an “Energy for London” plan sets targets for improving energy efficiency and moving to renewables. In terms of greenhouse gas emissions, London saw a 25 per cent decrease between 1990 and 2015 but it still accounts for 7-8 per cent of the UK’s total. In parallel, around ten per cent of London’s households are in fuel poverty.

For solar, around 110 megawatts are generated at present, with targets of one gigawatt by 2030 and two gigawatts by 2050. While there is little room for large PV farms, points out Matthew Thomas, principal policy and planning officer for the environment at the Greater London Authorities (GLA), there is a lot of surface space when you take into account all of the capital’s roofs.

Reflecting the new urgency, there are advanced plans for solar PVs on half of London’s fire stations and a study is looking at all of Transport for London’s 1000 or so buildings, with an initial 25 identified for installations. There are also grants for local authorities (sitting below the GLA are London’s 33 boroughs). There was six megawatts of solar last year within planning applications that went to the mayor’s office, added Thomas.

He was speaking at an event organised by The Green Register, an association of construction professionals focused on promoting sustainability through training. It was held, appropriately, at the Kennington home of charity, Roots & Shoots, which works with youngsters who struggle within traditional education.

One tangible project is in the London Borough of Greenwich, within the EU’s Horizon 2020 initiative. London is one of the lead cities for a project that is intended to “put people at the front of energy systems”, alongside Lisbon and Milan, with Bordeaux, Burgas (Bulgaria) and Warsaw as followers. The themes are building retrofitting, e-mobility, and smart energy management systems and platforms (the latter centred on making energy data as open and accessible as possible).

Greenwich has nearly 100,000 homes, with a rapidly projected increase in population (50,000 over the next eight years), more than 20 million tourists per year and eight miles of river frontage. Shaun Gibbons, senior project manager at the GLA’s relatively new smart energy team, points out that if Greenwich was a city then it would be the 18th largest in the UK.

There is a fair amount of policy in place around new-builds, said Gibbons, but one of the biggest challenges was identified as retrofitting existing stock, particularly social housing. The importance of this can be seen from a few statistics. London’s existing buildings are responsible for nearly 80 per cent of the city’s CO2 emissions (housing alone being responsible for 34 per cent), and 80 per cent of those buildings are likely to still be standing in 2050. If the targets are to be met, existing building stock has to be a major focus.

A social housing block was identified as a pilot. It comprises 93 flats and has high annual energy costs of around £80,000. It has three gas boilers that are on, all day, every day throughout the year, with no system controls and with heat loss estimated at around one-third, with a lot of this “in-dwelling”. The costs are met by the council but are then charged back to residents via service charges. The inefficiencies also mean high carbon emissions and poor air quality. “It was the perfect opportunity for us to do something,” explained Gibbons.

A number of options were considered. One was to tap into Greenwich power station which is close and acts as a back-up for Transport for London for the underground. Another was a water source heat pump in the Thames (the flats are about 100 metres away). However, the latter would have been expensive. There is a large tidal range here, of more than eight metres, so to ensure that a pump was always fully submerged it would have needed to be 30 metres from the shore, which would also have complicated future maintenance.

While the options were being considered, a study also looked at retrofitting, including external wall insulation, roof PVs, replacement windows, LED lights, replacement of radiators and other measures. The fact that the block resides in a world heritage area meant the solar panels and external insulation were non-starters but there were plenty of steps that could be taken.

One thing that had to be considered was the impact of retrofitting on the business plan for the energy part of the project, as the numbers will clearly change as a result of the efficiency measures. It was also important to involve residents from the outset, so there was a lot of stakeholder engagement from the planning stage onwards, said Gibbons.

In the end, it was decided to go for a shallow “gravel” bore hole heat pump solution along with internal retrofitting measures (including replacing radiators, piping and routing combined with a lot of monitoring and metering). It is planned to put in the new system in parallel with the existing one, so there is no break in service for residents, some of whom are vulnerable.

For the future, said Gibbons, there might be the addition of battery storage and electric vehicle recharging. “We think this has a lot wider application and replication,” he concluded and it fits with Greenwich’s “Greener Greenwich Strategy” as well as the overarching London-wide goals.

In terms of funding, in 2017, the Mayor allocated £450,000 capital to match fund at least ten zero energy retrofit projects, with the scheme dubbed “Energy Leap”. If successful, it is intended that the pilot projects will lead to a roll out of the approach on a much greater scale. 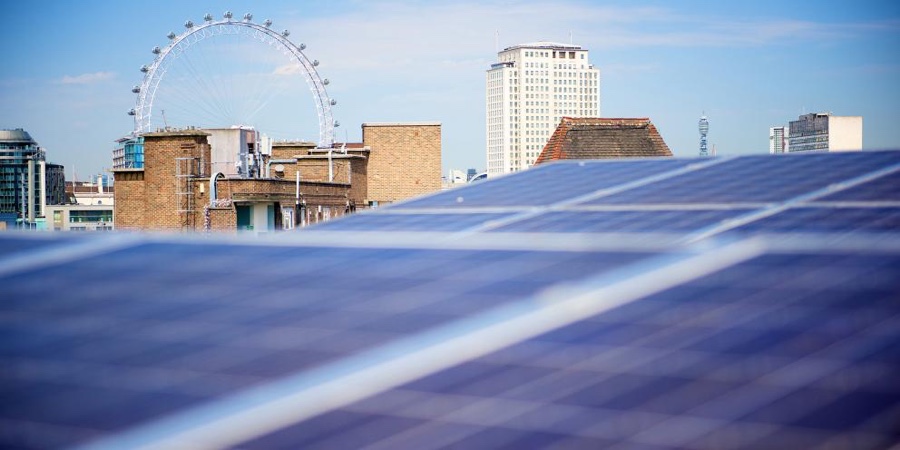 While the Greenwich project enters the implementation stage, another initiative is seeking to accelerate the uptake of solar PV by residents through making the process simpler and cheaper. Part of London’s long-standing RE:NEW scheme, it is dubbed “Solar Together London” and is intended to address the fact that less than half a per cent of Londoners have solar panels.

Karen Klomp, development manager for housing consultancy, real estate and infrastructure at Capita is working on the project and explained that there are mitigating reasons for the low uptake, including a lot of rented properties and conservation zones, but many people are also probably put off by the hassle.

A group buying scheme has been put in place. Residents can register their interest on a website with no obligation. Pre-vetted installers are then contacted with details of the number of interested residents and are asked to submit offers, with selection based on best price. A bespoke offer is then made to each resident, which they can accept or reject. If they have questions then there is a help desk to provide support. If they accept, then the installer is provided with their details, arranges a visit and, if everything is fine, proceeds with the work.

It takes away the complexities, said Klomp. The local authority acts as a trusted partner and its proposal is likely to be more compelling than that of a private company. The vetting is carried out by iChooser, a specialist in collective energy switching schemes, and includes consideration of materials, labour contracts and technical capabilities. “It isn’t a race to the bottom on cost,” she asserted.

The London scheme was aided by looking at such schemes elsewhere, including in Belgium, the Netherlands and the UK (an iChooser-led scheme in Norwich in 2015 resulted in 600 installations, although this was ahead of the UK government’s severe cuts to the Feed-in-Tariff subsidy scheme).

The first phase of the scheme involved five London local authorities, Brent, Ealing, Kingston, Merton and Sutton. Around 4000 people registered and more than 1100 accepted the final offer. Surveys are under way so it isn’t yet possible to be sure of the number of final installations.

The successful bid was from Solar Century, the UK’s largest solar company, and its offer was around 35 per cent lower than the market price. Those lower costs are possible through economies of scale, and by the provider gaining a geographically concentrated captive audience of “hot leads”.

A second scheme has been launched with twelve London local authorities. The target is 7500 registrants and 1750 acceptances.

The end of the Feed-in-Tariff at the start of April next year leaves something of a question-mark over subsequent phases but Klomp is hopeful, in part because of the significant fall in the cost of PVs. While there might be a slight dip, “solar is alive and well”.

The group-buying scheme could be extended to home battery storage but, for the time-being, this was felt too complicated to add into the offers. Klomp believes that it might be worth considering again in a couple of years’ time.

While London might be some way behind the curve and while there are uncertainties on the horizon (including alternative funding post-Brexit), the pace of change has certainly picked up.
By Martin Whybrow|2018-07-09T09:01:27+01:00Jul 9th, 2018|Environment|0 Comments